Roger Keith Barrett, popularly known as Syd Barrett, was an English singer, musician, and painter. Best known as a founding member of the famous band Pink Floyd, he served as its lead singer, guitarist and songwriter. He is also credited for naming the band. He wrote most of the songs in the band’s debut album ‘Piper at the Gates of Dawn’. In fact, his LSD-inspired lyrics became a craze in London during the late 1960s. He was dismissed from Pink Floyd in 1968 due to his drug-induced erratic behavior. During his short-lived solo career, Barrett released two intriguing and influential albums, ‘The Madcap Laughs’ and ‘Barrett’. However, they were not commercially successful. He then formed the band Stars, which was a short-lived one. Despite possessing a lot of potential, he was active in the music industry for less than ten years. He eventually became a recluse, living in Cambridge with diabetes and mental illness. After he left Pink Floyd, the band featured his mental illness as a theme on its later albums and songs like ‘The Dark Side of the Moon’ and ‘Shine On, You Crazy Diamond’. Barrett died on July 7, 2006 from pancreatic cancer at the age of 60. Phil Collins
Guitarists #58
Rock Singers #107
Musicians #303
Continue Reading Below
DID WE MISS SOMEONE?
CLICK HERE AND TELL US
WE'LL MAKE SURE
THEY'RE HERE A.S.A.P
Quick Facts

British Celebrities
Guitarists
Rock Singers
British Men
Male Singers
Childhood & Early Life
Syd Barrett was born on January 6, 1946, in Cambridge, Cambridgeshire, England, to Winifred Barrett and Arthur Max Barrett, who was a pathologist. His father died of cancer in December 1961, when Barrett was almost 16.
When he was a child, he played the piano, ukulele, banjo, and guitar. He also loved drawing and writing poetry and won awards for his poetry in high school.
Initially, he attended Morley Memorial Junior School. In 1957, he started attending Cambridgeshire High School for Boys, and in 1962, he joined the Cambridge Technical College.
He formed a band called Geoff Mott and The Mottoes, which was short-lived. Around that time, he was influenced by the Beatles and sang their songs at parties and picnics. He also started writing songs during that time. As a young man, he enrolled himself in Camberwell College of Arts in London to study painting. 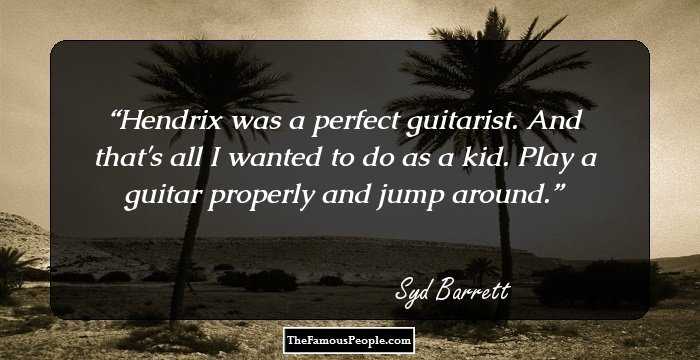 Who Is The Most Popular BTS Member?
Career
In London, Syd Barrett reconnected with Roger Waters, his school friend from Cambridge. Waters had formed a band with Richard Wright and Nick Mason, which was called The Sigma 6. When one of the members left, Barrett joined the band, which went through several name changes and was finally named Pink Floyd by Barrett in 1965, after two U.S. blues musicians, Pink Anderson and Floyd Council.
In 1965, the band recorded Beatles covers and three songs by Barrett—‘Double O Bo’, ‘Butterfly’ and ‘Lucy Leave’. Barrett also had his first acid trip in 1965, which marked the beginning of the end of his career.
In 1967, Pink Floyd released their debut album, ‘The Piper at the Gates of Dawn’. Barrett wrote most of the songs for the album and also the songs that were later included in his solo albums. The album was praised as one of the best rock albums of the year.
By mid-1967, Barrett had started behaving in an erratic manner due to his drug abuse. He did not contribute any songs to the band’s future albums and was not serving the band as a productive member. He did write some songs, but they were not featured on any of the band’s albums.
During Pink Floyd’s 1967 tour, the band had to hire a substitute guitarist as Barrett didn't turn up for the tour. They hired David Gilmour as the second guitarist as Barrett’s behavior became increasingly erratic. On April 6, 1968, Pink Floyd expelled Barrett from the band.
After leaving Pink Floyd, Barrett was out of the limelight for a year. He released two solo albums in 1970—‘The Madcap Laughs’ and ‘Barrett’—both failed commercially. ‘The Madcap Laughs’ was recorded over a year with five different producers working on it. Pink Floyd’s guitarist David Gilmour and keyboardist Richard Wright helped Syd Barrett produce the album ‘Barrett,’ which would be his last one.
In 1972, Barrett joined drummer Twink and bassist Jack Monck and formed the short-lived band called Stars. Years later, in 1988, EMI Records took Barrett's approval and released the album ‘Opel’, which included his unreleased music recorded from 1968 to 1970.
By 1990, he had left the music industry and was totally out of the limelight until his death many years later.
In 2001, EMI Records released an album, ‘The Best of Syd Barrett: Wouldn't You Miss Me?’ in the UK as well as in the US. The album featured the single ‘Bob Dylan Blues’, which was released for the first time.
Continue Reading Below
Some of his singles were compiled in an album titled ‘An Introduction to Syd Barrett’, which was released in 2010 by Harvest/EMI and Capitol Records.
Barrett's music and techniques have influenced the works of many musicians. The music industry has praised Barrett as an innovative guitarist who used unique techniques and always explored different musical and sonic effects. 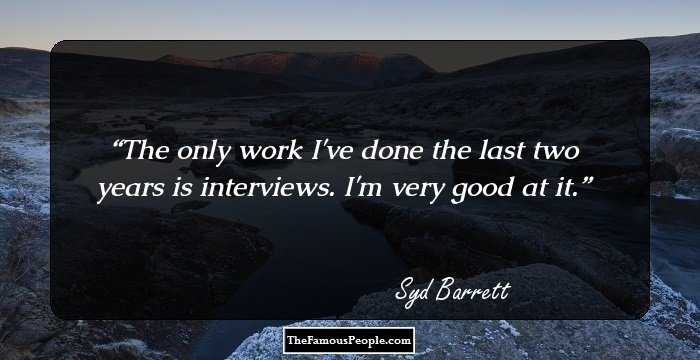 Major Works
The album ‘The Piper at the Gates of Dawn’ was Syd Barrett’s best work. There were the US as well as the UK versions of the album. The singles ‘See Emily Play’, ‘Astronomy Domine’ and ‘Interstellar Overdrive’ became quite popular. In 2012, the album was voted 347th on Rolling Stone magazine's list of 500 Greatest Albums of All Time.
Personal Life
Syd Barrett was romantically linked with many women like Libby Gausden, Lindsay Korner, Jenny Spires and Iggy the Eskimo but he never got married or had children. He was once engaged to Gayla Pinion but the marriage never happened.
In 1978, he left the music world and stayed out of the limelight for the rest of his life. He moved in with his mother in Cambridge. He took up painting and started gardening. During his later years, he interacted only with his sister, Rosemary.
Although it is believed that he suffered from mental illness, he was never officially diagnosed with any mental disorder.
He suffered from diabetes for several years. He took psychedelic drugs, especially LSD, which he had started in the 1960s. He also suffered from schizophrenia. He died of pancreatic cancer on July 7, 2006. He was 60.
After his death, a French couple bought his house at St. Margaret's Square, Cambridge. His paintings, scrapbooks, etc., were sold at an auction house in Cambridge, which raised £120,000 for charity. According to newspapers, Barrett left about £1.7 million, earned from royalties and recordings, to his two brothers and two sisters. 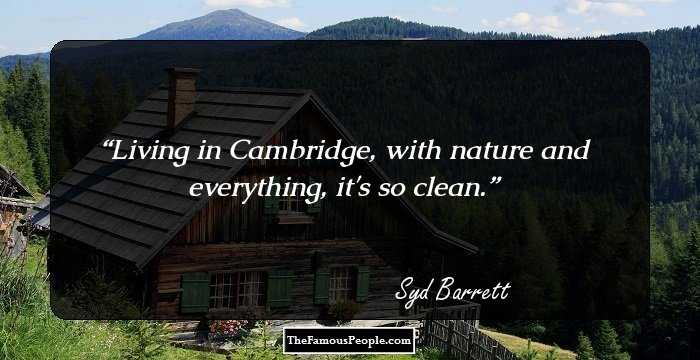 Quotes: Nature, Living
Recommended Lists:
Singers #836
You May Like

Quotes By Syd Barrett | Quote Of The Day | Top 100 Quotes

See the events in life of Syd Barrett in Chronological Order