Liam Gallagher is a singer-songwriter and one of the front men of the now defunct and famous Britpop band - Oasis. When Oasis burst on to the British music scene in the early 90s, the front men who were brothers gained fame for their uncompromising music quality and their personas as their songs rose up the charts. Setting the stage on fire with raspy voice, sunglasses, bushy eyebrows, and his hunched-arms-down style of singing, Liam Gallagher quickly gained a huge fan following. His temper, however, has time and again landed him in problems with his band, the press, and the fans overseas. He is known for getting into bar fights with singers and managers, hurling chairs at his brother and band mate, head-butting a fan who asked for his autograph and bad mouthing anyone. Despite his perennial bad behaviour, critics and fans love him nevertheless for his music. He provides the vocals for his bands and can play the tambourine, guitar, harmonica, and piano. He owns three labels: Creation, Big Brother, and Epic Beady Eye. His singing style and stage presence have been compared to that of John Lennon and John Lydon. British People
British Men
Virgo Singers
Male Singers
British Singers
Childhood & Early Life
William John Paul Gallagher was born to Irish couple, Thomas and Peggy Gallagher. His father was violently abusive, and his mother moved out of the house with her sons when he was 12.
His troubled younger years are rife with stories of bad behaviour. The singer was known for antagonizing people, getting suspended from school, and stealing bicycles from local shops.
In his late teens, the singer developed an ear for music and practised his singing skills listening to The Beatles, The Who, The Stone Roses, The Jam, etc. 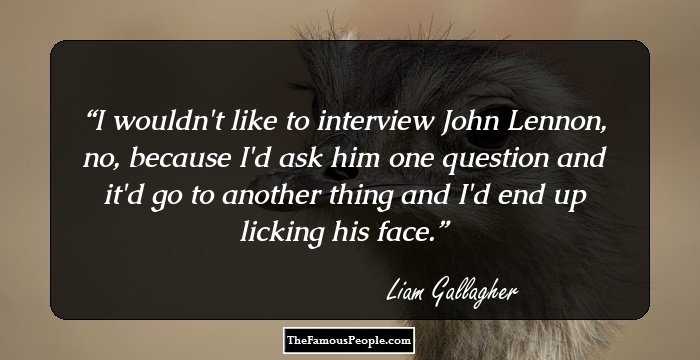 Quotes: Like, I
Continue Reading Below
Career
This talented musician began singing with McGuigan, a school friend, in band, ‘The Rain’. They rarely practised and performed fewer gigs. Noel Gallagher agreed to join the band on the condition that he will be the sole songwriter. The band soon changed its name to Oasis.
‘Definitely Maybe’, their first album, took over the airplay in no time, and soon the band was being compared to the likes of ‘The Beatles’. They soon established a healthy rivalry with Blur, going so far as to publish a new singles on the same day in 1995.
In 1997, he worked with the band to release ‘Be Here Now’ which set a new record as the fastest selling album in UK chart history.
Year 2000 saw the departure of key founding members — Paul Arthurs and McGuigan— during the recording of ‘Standing on the Shoulders of Giants’.
He wrote three songs for the next album Heathen Chemistry, released in 2002. Songbird peaked at number 3 in the UK charts. Later that year, he was involved in a bar fight in Munich forcing the band to pull out of shows in Germany.
He wrote ‘Love Like a Bomb’, ‘the Meaning of Soul’, and ‘Guess God Thinks I’m Abel’ for Oasis’s sixth album ‘Don’t Believe the Truth’, which released in 2005.
In 2008, the band’s final album, ‘Dig Out Your Soul’ featured 3 songs: I’m Outta Time, Ain’t Got Nothin’ and Soldier On. The album peaked at number 1 position in the UK charts and 5th position on the US billboard charts.
In 2009, the band split when Noel Gallagher walked out of the band citing his brother as someone who was impossible to work with. The remaining members stayed together to form ‘Beady Eye’.
In 2010, Bring the Light, the first single of Beady Eye was released, and Liam started to work on a feature film about ‘The Beatles’ through his production company, In 1 Productions. The same year, he also launched Pretty Green, a clothing line.
Continue Reading Below
The band released their debut album ‘Different Gear, Still Speeding’ in 2011 and led the Japan Tsunami Disaster Relief Gig at O2 Academy Brixton.
In 2013, he released the second album for Beady Eye, BE and started a tour as secret gigs at Glastonbury. 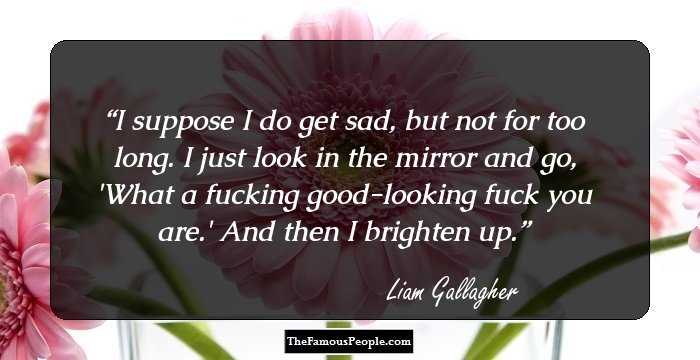 Quotes: You, I
Major Works
The second studio album ‘What’s the Story Morning Glory’ is Oasis’s highest-selling album with more than 22 million copies sold worldwide.
His most significant work as a solo artist is ‘Different Gear, Still Speeding’, which peaked at number 3 on the 2010 charts and sold more than 66,000 copies in the first week.
Awards & Achievements
At the 2007 Brit Awards, he along with the other band members of Oasis, was conferred the Outstanding Contribution to Music Award.
Oasis has received several Grammy nominations and won several BRIT Awards. Its 1996 album ‘What’s the Story Morning Glory’ won the BRIT Awards for the best album 30 years in 2010.
In 2010 poll by Q magazine, he was voted the greatest frontman of all time.
Personal Life & Legacy
Liam Gallagher and his brother are avid supporters of Manchester City Football club. Their love for football has brought them closer to resolving their most recent standoff.
In 1997, he married Patsy Kensit with whom he has a son, Lennon. In 1998, he fathered a child, Molly, with Lisa Moorish. Since 2000, he was in a relationship with Nicole Appleton, a member of ‘All Saints’; they married in 2008 and have a son, Gene.
He, along with his band members, organized a fundraiser for the Japan Tsunami Disaster and raised more than 150,000 pounds for the British Red Cross.
Trivia
One of the many eccentricities of this Britpop singer is that he claimed to be a re-incarnation of John Lennon, despite being born 8 years before his death.
This frontman sings with his arms behind his back and ensures that the microphone comes extremely close between his upper lip and nose.

See the events in life of Liam Gallagher in Chronological Order