Billy Joel is a famous American pianist, singer, song-writer, and composer. He began his career with a musical group called ‘The Echoes,’ which later became known as the ‘Lost Souls.’ He is regarded as one of the most popular recording artists and the biggest entertainers in the world. He earned many ‘Grammy Awards’ for his album ‘Glass Houses’ and was also presented with the prestigious ‘Grammy Legend Award’ in 1990. He received the ‘Recording Industry Association of America Diamond Award’ for his album ‘Greatest Hits Volume I and Volume II’ which has sold more than 11.5 million copies till now. Joel has explored various genres of music, incorporating and merging different elements, including romantic ballads, hard-rock element, and jazz combined with pop and soul. Over the course of his career, his songs have been cherished by millions of his fans. Joel’s signature song ‘Piano Man’ took him to the peak of superstardom, and became a big radio hit of its time. Even today, it remains popular and is ranked as one of his best songs ever. American People
Pop Singers
Rock Singers
Lyricists & Songwriters
American Men
Childhood & Early Life
Billy Joel was born William Martin Joel on May 9, 1949, in The Bronx, New York, USA, to Howard, a German-Jewish holocaust survivor and an accomplished pianist, and his wife Rosalind Nyman. Soon after his birth, his family moved to the Levitt homes section of Hicksville in Long Island where he spent his childhood.
In 1953, he began attending piano classes and demonstrated an aptitude for playing the instrument. He was taught by the noted American pianist Morton Estrin and musician-songwriter Timothy Ford. 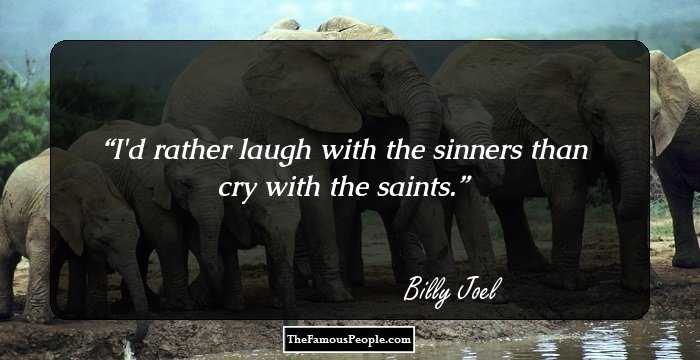 Continue Reading Below
Career
In 1963, he joined his first band ‘The Echoes,’ which later came to be known as ‘The Lost Souls.’ He recorded several of his instrumental pieces with the band. During this time, he left high school to pursue a career in music.
In 1967, he left ‘The Lost Souls’ to join a new band called ‘The Hassles.’ It was a Long Island group which had signed with ‘United Artists Record.’ The band released their first album ‘The Hassles’ and subsequently released their second album ‘Hour of the Wolf’ the next year. Both the albums were commercial failures.
In 1969, he left the band along with the band’s drummer Joe Small and formed a heavy metal duo with him named ‘Attila.’ They recorded an album with ‘Epic Records’ and debuted in July 1970. The duo soon disbanded due to clashes over personal issues.
In 1971, he signed a solo recording contract with ‘Family Productions’ and released his first solo album ‘Cold Spring Harbor.’ However, the album was a technical disappointment as it was mastered at too high a speed. Few years later, ‘Columbia Records’ released a remastered version of the album, with certain songs re-orchestrated or shortened.
Soon after, he went from West Coast to Los Angeles due to a contractual dispute and played piano at ‘The Executive Room’ piano bar in Wilshire Boulevard under the name ‘Bill Martin.’ During this time, he composed his signature hit ‘Piano Man.’
In 1972, ‘WMMR-FM,’ a radio station of Philadelphia, started playing his live concert recording ‘Captain Jack’ which soon became a chartbuster on the East Coast. After hearing the song, the executives of ‘Columbia Records’ offered him a recording contract. He recorded with ‘Columbia Records’ for three years before returning to New York.
In 1973, he recorded the album ‘Piano Man’ with ‘Columbia Records’ in Los Angeles. It later became his first top 20 single and first gold album.
In 1976, he came back to New York and assembled a new band, incorporating musicians of his own choice. In the same year, he embarked on his first concert tour.
In 1978, he released his second album ‘52nd Street’ which was labeled as more sophisticated and jazzy. It is considered one of the greatest albums of all time.
Continue Reading Below
In 1979, he traveled to Cuba to participate in a three-day event called ‘Havana Jam Festival’ at the ‘Karl Marx Theatre.’
In 1980, he released ‘Glass Houses’ which acquired the topmost position on the ‘Billboard Album Chart’ and stayed there for six consecutive weeks.
In 1981, he came up with an album titled ‘Songs in the Attic.’ The album housed live performances of his not so popular songs composed at the beginning of his career. The album introduced his fans to many of his earlier compositions.
In 1983, he recorded an album titled ‘The Innocent Man.’ The album, which gave him his second Billboard hit, was a tribute to the popular American music of his teenage years. In the same year, ‘Columbia Records’ re-released his first album ‘Cold Spring Harbor.’
In 1986, his tenth studio album ‘The Bridge’ was released. The album was a collaboration between Billy, Ray Charles, Cyndi Lauper, and Steve Winwood. It yielded successful singles, such as ‘Matter of Trust’ and ‘A Modern Woman.’
In 1987, he became the first American rock star to perform in the Soviet Union after the fall of the Berlin Wall. He also performed in Moscow, Leningrad, and Tbilisi. His live album named ‘KOHUEPT’ (Russian for Concert) was released in October that year.
In 1989, he released ‘Storm Front’ with producer Mick Jones. ‘Storm Front,’ Billy Joel’s eleventh studio album, housed the popular single ‘We Didn’t Start the Fire.’
In 1993, he released ‘River of Dreams’ which was his last pop album. In the same year, he joined a star cast for a performance to benefit an AIDS project in Los Angeles.
In 1997, he released ‘Greatest Hits Volume III.’ It included his two famous singles, ‘To Make You Feel My Love’ and ‘Hey Girl.’
Continue Reading Below

On January 7, 2006, he went on a musical expedition across the United States and performed in twelve sold out shows at Madison Square Garden in New York City. In the same year, ‘Columbia Records’ came out with ‘12 Gardens Live,’ which was a compilation of his songs from the Madison Square Garden concert. In July, he performed in a free concert at Rome as part of his European tour.

On February 4, 2007, he performed the national anthem at ‘Super Bowl XLI.’ In the same year, ‘Columbia Records’ released ‘All My Life’ which was his first new pop song since 1993.
In 2011, his albums ‘Cold Spring Harbor’ and ‘Piano Man’ were re-released by ‘California Records.’ The albums included many previously unavailable studio tracks and live performances.
Joel played the first concert at the newly renovated ‘Nassau Coliseum’ in April 2017. He announced the first-ever concert at a baseball stadium at ‘Camden Yards’ in 2019. 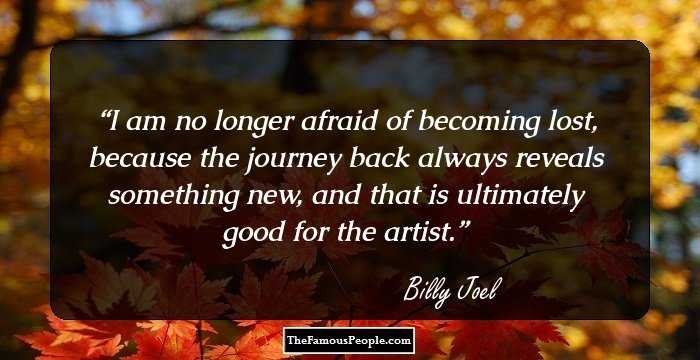 Quotes: I
Major Works
In 1974, he recorded ‘Streetlife Serenade’ with ‘Columbia Records’ in Los Angeles. ‘The Entertainer’ proved to be a brilliant track in the album. He garnered much recognition because of the track ‘The Entertainer.’
In 1977, he collaborated with producer Phil Ramone to release ‘The Stranger.’ It became a big hit and emerged as Columbia Record’s biggest-selling album at the time.
In 1982, he recorded ‘The Nylon Curtain’ with producer Phil Ramone. Thereafter, he embarked on a tour to promote his album. ‘The Nylon Curtain’ proved to be one of his most ambitious albums.
In 1985, he came up with ‘Greatest Hits Volume I and II.’ It proved to be a highly successful album and was claimed to be the third most-selling album in American history by ‘Recording Industry Association of America.’
Continue Reading Below
In 2001, he released ‘Fantasies and Delusions’ which was a collection of his classical compositions on piano. It was well received by the audience and became one of his most successful projects.
On January 26, 2008, he performed with the ‘Philadelphia Orchestra’ and premiered his new classical composition ‘Waltz No.2’ (Steinway Hall) to celebrate the 151st anniversary of ‘Academy of Music.’
Awards & Achievements
In 1978, his song ‘Just the Way You Are’ won two ‘Grammy Awards’ under the ‘Record of the Year’ and ‘Song of the Year’ categories.
In 1984, he won the ‘ACE Award’ (Award for Cable Excellence) for his album ‘Live from Long Island.’
In 1991, he received the prestigious ‘Grammy Legend Award,’ a special award given to recording artists.
In 1997, he was given the ASCAP’s founder award for lifetime achievement.
In 1999, he was given the ‘RIAA Diamond Award’ for his work ‘Greatest Hits Volume I & II’ as it sold more than 11.5 million copies.
In 2000, he received ‘The James Smithson Bicentennial Medal’ from the ‘Smithsonian Institution.’ In the same year, he received an honorary doctorate of music from ‘Long Island University,’ Southampton College.
On June 14, 2001, he received ‘Johnny Mercer Award’ at the ‘Songwriter’s Hall of Fame’ dinner in New York City. 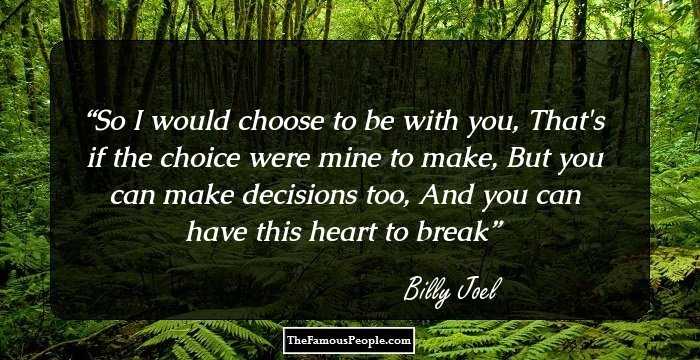 Quotes: You, Heart, I
Personal Life
In 1970, Billy tried taking his own life by drinking furniture polish. After recovering at a hospital, he said, “I drank furniture polish. It looked tastier than bleach.”
On September 5, 1973, he married Elizabeth Weber Small, ex-wife of his former music partner Jon Small with whom he had formed the duo ‘Attila.’ Elizabeth and Billy divorced on July 20, 1982.

On March 23, 1985, he married Christie Brinkley, an American model, with whom he had a daughter named Alexa Ray Joel. Her middle name ‘Ray’ comes from Ray Charles, a music icon whom he idolized. The couple divorced on August 26, 1994, but remained on friendly terms.

On October 2, 2004, he married American cookbook author Katie Lee who is thirty-two years younger than him. After being married for five years, the couple announced their separation on June 17, 2009.

Trivia
He appeared in the music video of the popular song ‘We are the World.’

See the events in life of Billy Joel in Chronological Order