Advanced Search
Slash is a British-American musician, the former lead guitarist of the hard rock band Guns N' Roses. He achieved international success and fame with the band and also formed the side project Slash's Snakepit while he was still involved with the band. Born as Saul Hudson in London to an inter-racial couple, he developed an early interest in music and started playing the guitar as a teenager. He had a troubled childhood as his parents separated while he was very young and he was primarily raised by his father with whom he had a difficult relationship. His parents eventually reunited and separated again, adding to his mental distress. He grew up to be a rebellious teen, full of bitterness towards the way he was raised. He disliked school, but was drawn towards music and was inspired by a teacher to pursue music as a profession. As a teenager he tried to form a band with a friend and even though the band did not materialize, the experience helped in his development as a guitarist. He became involved with the band Guns N' Roses in the mid-1980s and achieved worldwide success with them as their lead guitarist. Eventually he left the band to form the supergroup Velvet Revolver and later on embarked on a solo career Oliver Sykes
23rd July In History
DID WE MISS SOMEONE?
CLICK HERE AND TELL US
WE'LL MAKE SURE
THEY'RE HERE A.S.A.P
Quick Facts

American People
British People
American Men
British Men
Beverly Hills High School
Leo Musicians
Childhood & Early Life
Slash was born as Saul Hudson in London on July 23, 1965. His mother Ola J. Hudson was an African-American costume designer and his father Anthony Hudson was a white English artist. He was nicknamed “Slash” by a family friend.
He had a difficult childhood marked by his parents’ separation, father’s alcoholism, and other troublesome family issues. He was a troubled child who grew up to be a rebellious teenager.
He was not much interested in academics as a school student and was more inclined towards music. He began taking guitar classes with Robert Wolin, a teacher at Fairfax Music School.
He also loved biking, but his love for music was so great that he abandoned biking to focus on his music. He was so passionate about music that he practiced playing the guitar up to 12 hours a day. 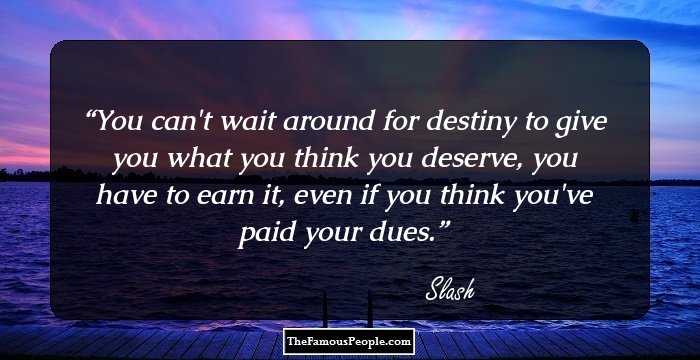 Quotes: You, Think
Continue Reading Below
Career
Slash embarked on his professional career in the early 1980s. He joined his first band in 1981 and two years later, he formed his own band with his friend, Steven Adler. However the band was not successful and was disbanded quickly.
He, along with Adler joined the newly founded band Guns N’ Roses in 1985. Initially they played at nightclubs and opened for bigger bands, and by the end of 1986 they began recording their debut album.
Guns N' Roses released their debut album ‘Appetite for Destruction’ in 1987 which reached No. 1 on the Billboard 200, on the strength of the hit ‘Sweet Child o' Mine’—their only single to reach No. 1 on the Billboard Hot 100.
Over the next few years, Slash found widespread fame and success with the band which released several successful albums including ‘Use Your Illusion I’ (1991), ‘Use Your Illusion II’ (1991), and ‘The Spaghetti Incident?’ (1993).
By the mid-1990s, Slash realized that he no longer wanted to be a part of Guns N’ Roses and quit the band in 1996.
He later formed a supergroup, Velvet Revolver, with his former band mates Duff McKagan, and Matt Sorum, alongside Dave Kushner and Scott Weiland. The group achieved considerable success with their debut album, ‘Contraband’ which debuted at No. 1 on the U.S. chart and sold two million copies. After a successful stint with the group, Slash left Velvet Revolver in 2008.
Eventually he decided to embark on a solo career, and released his debut solo album, ‘Slash’, in 2010. It featured the hit songs ‘Beautiful Dangerous’, ‘Back from Cali’, ‘Nothing to Say’, and ‘Starlight’. The album was a huge commercial hit and re-established Slash as a successful performer in his solo career.
He began working on his much-anticipated second album in 2011 and released the album ‘Apocalyptic Love’ in 2012. The album, noted for its stripped down hard rock sound, debuted at No. 2 on the Canadian Albums Chart. 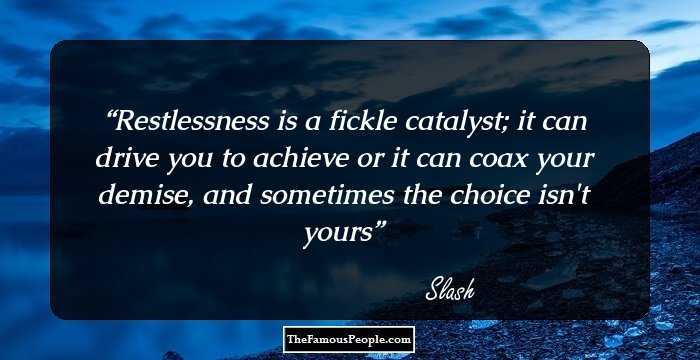 Quotes: You
Continue Reading Below
Major Works
His debut solo album, ‘Slash’, proved to be a big hit and established him as a successful solo artist. He featured several musicians in the album, including his old friend, Steven Adler. The album peaked at No. 1 on the Austrian Albums Chart, Canadian Albums Chart, Finnish Albums Chart, and U.S. Billboard Independent Albums.
Awards & Achievements
In 2007, Slash was awarded the title of “Riff Lord" during Metal Hammer's fourth annual Golden Gods awards.
He received the award for "Best Guitarist Of The Year 2012" by Loudwires readers in 2013.
In January 2015, he received the Les Paul award. 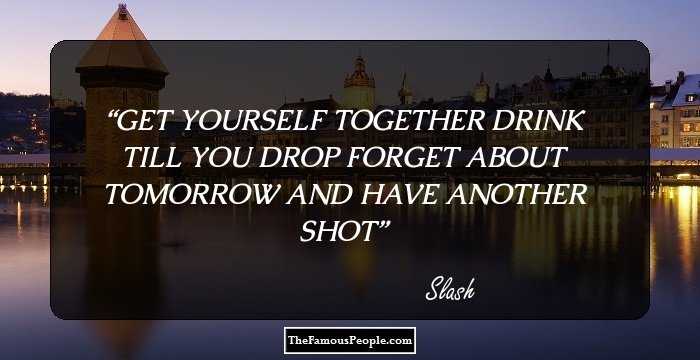 Quotes: You, Together, Yourself
Personal Life & Legacy
Slash married model-actress Renée Suran in 1992; this marriage ended in divorce in 1997.
He married Perla Ferrar in 2001. The couple has two sons. Slash first filed for divorce in 2010, but the couple reconciled a couple of months later. However their relationship soured again and he filed for divorce a second time in 2014.
He fell very ill in 2001 and was diagnosed with cardiomyopathy, a form of congestive heart failure caused by his many years of alcohol and drug abuse. Even though the initial prognosis was poor, he beat all the odds to survive. Currently he is clean and sober.
Trivia
He is a board trustee of the Greater Los Angeles Zoo Association and has long supported the Los Angeles Zoo and zoos around the world. He is also an honorary board member of Little Kids Rock, a national nonprofit that works to revitalize music education programs in disadvantaged public schools

See the events in life of Slash in Chronological Order