DID WE MISS SOMEONE?
CLICK HERE AND TELL US
WE'LL MAKE SURE
THEY'RE HERE A.S.A.P
Popularity Index
11
Geneticists #93
Scientists #3421
Physicians #1043
Quick Facts

Famous as: Pioneering work on prevention of Rh disease, and genetics of lepidoptera

Who was Cyril Clarke?

Sir Cyril Astley Clarke was a British physicist and scientist known for his pioneering work on prevention of Rh hemolytic disease of the newborn, a potentially fatal disease that may occur when a fetus and its mother have incompatible blood Rh factors. Once it was believed by the medical fraternity that there was no way of preventing this disease but the enterprising doctor proved the naysayers wrong by working along with a dedicated team of medical practitioners to develop a treatment for this dangerous condition. He was not just a highly skilled physician, but also a renowned geneticist and lepidopterist. His life-long interest in butterflies and moths began in his childhood when he became fascinated with swallowtail butterflies. He would induce the butterflies to mate and study the inheritance of wing pigmentation and mimicry. This childhood interest led him to study human genetics as well. Even though he achieved worldwide acclaim for his work on the prevention of Rh hemolytic disease of the newborn, his work ranged through life insurance practice, consultant physician and professor of medicine. Considered by his peers to be slightly eccentric, he called himself a “dilettante” and felt that his work was “fun”. He retained a child-like curiosity throughout life and was very dedicated towards his profession.

Virgo Scientists
Male Physicians
Male Scientists
British Physicians
Childhood & Early Life
He was born on August 22, 1907 into a medical family in Leicester, England. He was the son of Dr. Astley Clarke and the nephew of Percy Gee, two men who were among the founders of the University of Leicester.
He attended the Wyggeston Grammar School for Boys in Leicester before moving to the independent Oundle School near Peterborough. He was bullied at Oundle and developed a severe dislike for the institution.
He developed an interest in butterflies and moths during his school days. He was sent to the Leicestershire village of Houghton-on-the-Hill during the World War I where his 16 year old governess introduced him to the hobby of collecting butterflies and moths.
He opted to study Natural Sciences at Gonville and Caius College, University of Cambridge from where he graduated in 1929. Then he studied Medicine and Surgery at Guy’s Hospital, London, graduating in 1932.
Continue Reading Below
You May Like

British Scientists
Briton Geneticists
Virgo Men
Career
He served in the Royal Naval Volunteer Reserve as a medical specialist during the World War II. He studied the severe malnutrition and the resulting neurological complications in the British prisoners of war liberated from the Japanese camps and wrote a paper on it.
After the war, Clarke was appointed as a registrar at the Queen Elizabeth Hospital in Birmingham. In 1946 he became an honorary consultant physician at the David Lewis Northern Hospital, Liverpool.
He was appointed Director of the Nuffield Unit of Medical Genetics based at the University of Liverpool in 1963 and became Professor of Medicine a couple of years later. The teaching position suited him very well and he proved to be an enthusiastic and stimulating educator. The Department of Clinical Genetics thrived under his guidance.
He was elected Censor by the Royal College of Physicians in 1967 and became the Senior Censor four years later. In 1970 Clarke was elected a Fellow of the Royal Society. He was elected the President of the college when the then President Lord Rosenheim stepped down from the post in 1972.
He brought about a lot of changes during his tenure as the president. He initiated a review of the College constitution and ensured that the hitherto quirky MRCP examination was revamped into a proper test of clinical skills.
He was part of the team that developed the technique of giving Rhesus negative women injections of anti-RhD antibodies during pregnancy to prevent Rh disease in their offspring. This was a major medical breakthrough in the field of preventive medicine.
His term as the President of the Royal College ended in 1977. Along with some of his colleagues he established a research unit where they studied longevity and genetics of race horses.
He served as the director of the Royal College’s medical services study group from 1977 to 1983. In 1983 he became the director of its research unit and served till 1988.
Major Works
He is best remembered for his research in Rhesus Haemolytic Disease (RHD), also known as the ‘yellow baby’. The potentially fatal condition that arose in some of the children of Rhesus negative mothers and Rhesus positive fathers was believed to be incurable. However, the brilliant doctor developed the use of an antibody, anti-D, which could prevent this dangerous condition in newborns.
Awards & Achievements
In 1980, he along with the likes of Dr. Ronald Finn, Dr. Vincent Freda and Dr. William Pollack was jointly awarded the Albert Lasker Award for Clinical Medical Research for their pioneering work on the Rhesus blood group system and the prevention of Rh disease.
Personal Life & Legacy
He married Frieda “Feo” in 1935. Theirs was a happy marriage that produced three sons. His wife was very supportive of his research work and helped him in breeding butterflies.
He had a lifelong love for butterflies and moths. He collected and bred them, and was an expert at crossing different species; his favorite, however was the Swallowtail.
He was devastated by the death of his beloved wife in 1998 and never fully recovered from this tragedy. He lived a long life and died on November 21, 2000 at the age of 93.
Recommended Lists:
You May Like

See the events in life of Cyril Clarke in Chronological Order 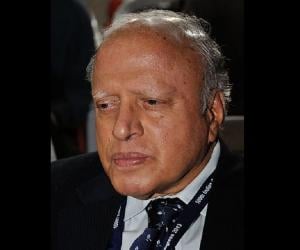