Shah Rukh Khan is one of the leading stars of the Indian film industry, who has been ruling the Indian cinematic world for decades. Often referred to as the romantic icon of Indian cinema, Shah Rukh has many nicknames such as ‘Badshah of Bollywood’, King Khan’ and ‘King of Bollywood’. He was a brilliant student and also did well in extra-curricular activities. He followed his dream to become an actor and his passion towards his work established him as one of the most renowned actors across the globe. He has been working hard throughout his career and has never given up. He has been through various upheavals in his life like injuries and criticism, but this only added fuel to his enthusiasm. The talented actor made a fresh start every time he was struck by an obstacle. He has an optimistic attitude towards life and faces all that comes with a firm belief in God. As an actor, he has tasted great successes as well as miserable failures. However, the successes he has registered make his failures seem negligible. He is also a producer and even owns a cricket team which plays in the ‘Indian Premier League’, a cricket tournament. He is a family man who, in spite of his busy schedule, finds time to be with his family. Humanitarian Work: Associated with ‘Make-A-Wish-Foundation’ and many other charitable organizations

Indian People
Actors
Game Show Hosts
T V & Movie Producers
Indian Men
Childhood & Early Life:
He was born to Meer Taj Mohammed Khan and Lateef Fatima on 2nd November 1965, in New Delhi, the capital city of India.
Khan received his education from the ‘St. Columba’s School’, Delhi, and was an exceptional student. He was also good at sports and was bestowed with the ‘Sword of Honour’, the greatest felicitation given to a student by the institution.
In the year 1985, he joined the prestigious ‘Hansraj College’ located in Delhi, to pursue his graduation with specialization in Economics. During this time, he also got trained in acting under the guidance of Barry John, who was a playwright associated with the ‘Theatre Action Group’.
He completed his bachelor’s degree in the year 1988, and then joined the ‘Jamia Millia Islamia University’, to pursue his post-graduate studies in Mass Communication. However, he dropped out from the institute and decided to embark on an acting career.
For quite some time, he joined the ‘National School of Drama’, Delhi before he was launched into his acting career. 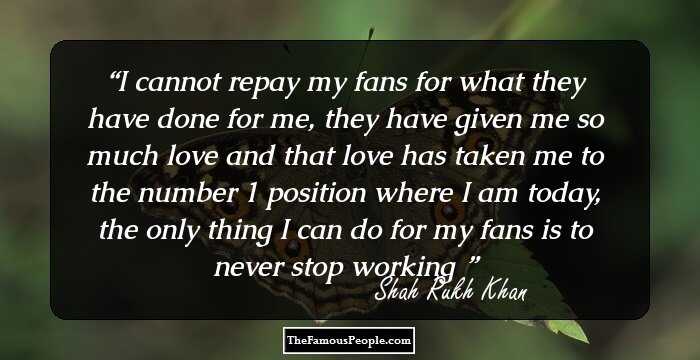 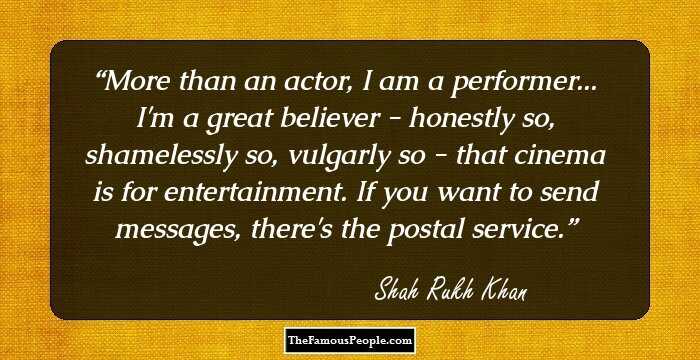 Major Works:
He has starred in many blockbuster movies which added a feather to his crown. However, the biggest hit of Shah Rukh’s career was the film ‘Dilwale Dulhania Le Jayenge’ (DDLJ). The movie is also considered to be one of the biggest blockbusters in the history of Indian cinema.
Continue Reading Below
This film hit the theatres in the year 1995 and has created new records. This has completed 1000 weeks continuous showing in the year 2014 which is a record in itself.
Awards & Achievements:
This star has won innumerable awards till date, which started with a ‘Filmfare’ award for his first film ‘Deewana’, in the ‘Best Debut’ category.
He has won the ‘Filmfare’ in the ‘Best Actor’ category several times, ‘Baazigar’, ‘Dilwale Dulhania Le Jayenge’, ‘Dil Toh Pagal Hai’, and ‘Kuch Kuch Hota Hai ’,‘ Devdas ’,‘ Swades’, ‘Chak De India’ and ‘My Name Is Khan’.
He has also been the recipient of the ‘Filmfare’ in the ‘Best Villain’ category for the movie ‘Anjaam’. He has won the ‘Filmfare Critics Award for Best Performane’ for the film ‘Kabhi Haan Kabhi Naa’ and ‘Filmfare Critics Award for Best Actor for ‘Mohabbatein’.
He has been honoured with the ‘Best Indian Citizen Award’ in the year 1997.
This star has received the ‘Global Indian Film Awards’ (GIFA) in the year 2005 for his film ‘Swades’ in two categories namely ‘GIFA Best Actor Award’ and ‘GIFA Most Searched Male Actor on Internet’.
During the period 2001-14, he has won the ‘International Indian Film Awards’ for the ‘Best Actor’ category for his films ‘Devdas’ and ‘Veer-Zaara’, ‘Chak De! India’. IIFA has also presented him with the ‘Most Popular Actor’ award and also ‘Star of the Decade’ and ‘Digital Star of the Year’ awards.
In 2002, he won the ‘Rajiv Gandhi Award for Excellence’ in the ‘Field of Entertainment’.
He was bestowed with the ‘Padma Shri’ award in the year 2005, by the Indian Government. This ranks fourth among the highest civilian awards in India.
Continue Reading Below
In 2011, the ‘UNESCO’ recognized his philanthropic work and awarded him with the ‘Pyramide con Marni’ award. 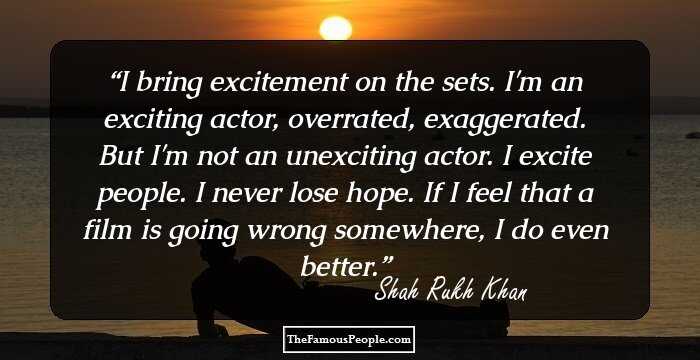 Personal Life & Legacy:
He got married to Gauri Chibber on 25th October 1991, after a long courtship of six years and the couple are blessed with three children named Aryan, Suhana and their third child is AbRam who is a surrogate child. Gauri is of Punjabi descent and the family follows both Islam and Hinduism.
A serious spinal injury in the year 2001, adversely affected this actor and he had to undergo operation which also put a brief halt to his career.
He is a family man and in 2011, he starred in the sci-fi flick ‘Ra One’ which was a film based on robots. The actor claimed that he worked in the film to fulfil his children’s wishes, who are great fans of superheroes and video games.
This actor endorses many causes like ‘Pulse Polio’, ‘National AIDS Control Organization’, ‘Water Supply and Sanitation Collaborative Council’.
Net Worth:
Shah Rukh Khan is estimated to have a net worth of $600 million. He was ranked second at the world’s richest actor in the year 2014.
Trivia:
In 2007, his wax statue was installed at the ‘Madame Tussauds’ museum, London, which made him the third Indian actor to earn a spot at this prestigious place