This chain-smoking, wiry, intellectual and astonishingly prolific artiste was the one who augmented the façade of ‘French Pop’ a few notches. He tantalized and roused the passive European music listener, through new sounds and provocative lyrics. He was a singer, a songwriter, an actor, a photographer, a director, a sentimentalist, an intellectual, a composer and chiefly, a genius who dabbled in poetry, verse, philosophy, rhythm, sound, and provocation. During a career spanning across 30 years, he crafted jazz, pop, reggae and rock tunes for various artists. His works are celebrated by the common man, be it a taxi driver, a policeman, a university graduate, a retired old man, or a teenager. He enjoyed commercial success at the beginning of his career for his jazz-style songs and caustic lyrics and has catered to the popular demand of various genres of music through every decade. The legendary stature of his progressive musician is acknowledged not only by artists in his native, France, but all over the world. He is still regarded as the controversial yet beloved artiste whose iconic legacy of lyrical brilliance, drama, scandals and controversy though widely criticized is also fondly acknowledged. To learn more about this artist ‘extraordinaire’, scroll further.

French Celebrities
Lyricists & Songwriters
French Men
Male Singers
French Singers
Childhood & Early Life
Serge Gainsbourg was born Lucien Ginsburg to Russian-Jewish emigrants, Joseph and Olga, who moved to Paris following the Russian Revolution. He and his twin sister, Liliane, began playing the piano from a very young age.
In his teenage years, World War II had a profound impact on his psychology and the alienation he was facing as a Jew tormented him a great deal. He then went to Limoges, where he worked with an orchestra and sent his earnings to his family. His family then moved to Limoges using false papers and identification and lived in seclusion. Once Paris was freed from the Nazi Occupation, the family returned to the city.
In 1945, he pursued painting at the illustrious ‘�cole Sup�rieure Des Beaux Arts’ in Paris along with pursuing music. 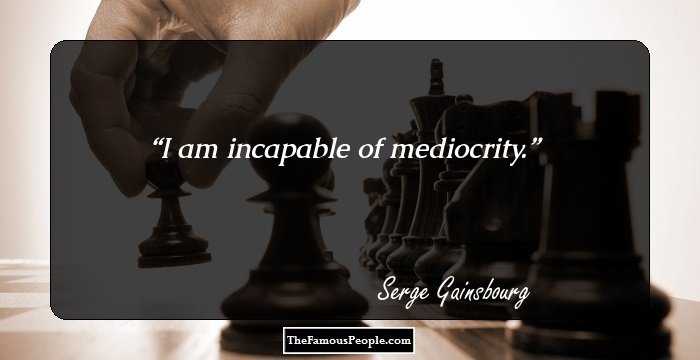 Who Is The Most Popular BTS Member?
Career
Frustrated by his not-so-successful painting career, he joined the ‘Societe des Auteurs-Compositeurs’ in 1954 and soon began writing and performing songs at various nightclubs, especially at the famous club, Milord L’Arsoille, in Paris.
It was here that he was discovered by the singer, Michele Arnaud and the composer, Boris Vian, who spread news about his talent. He was later signed on by the Philips Record Label. His debut album, released in 1958 titled, ‘Du Chant A la Une’ won the grand prize of the ‘L’Academie Charles Cros’.
As his own works enjoyed only modest sales, Gainsbourg honed his songwriting skills and began writing for other artists including, Juliette Greco, Petula Clark, Nana Mouskouri, France Gall, Minouche Barelli, Francoise Hardy, etc.
As the French youth took to American and British Rock ‘N’ Roll in the 60s, he moved away from Jazz, worked on more rock-based tunes, wrote film scores, and acted in films like ‘La Rivolta Degli Schiavi’ along with Rhonda Fleming, in 1960.
In 1969, he released the album ‘Jane Birkin/Serge Gainsbourg’ or ‘Je t’aime… moi non plus’ with Jane Birkin. A song of the same title would be re-recorded by Gainsbourg with another artist later in his career.
This prodigious artist’s musical output in the 70s is a list of highly influential albums including, ‘Histoire de Melody Nelson’, ‘Rock Around the Bunker’ and ‘L’Homme a tete de chou’.
He recorded the erotic ‘audio verite’ duet ‘Je t’aime…moi non plus’ with Brigitte Bardot, which was eventually released in 1986. A movie of the same title, written by Gainsbourg, released a decade earlier.
His record ‘Love on the Beat’, in 1984, was rife with sexual content and also referred to male prostitution. He pushed all boundaries, when his 13-year-old daughter, Charlotte Gainsbourg sung a duet with him in ‘Lemon incest’, a highly controversial track in the album.
His last studio album, ‘You’re Under Arrest’, which contained ten tracks, was released, in 1987.
Continue Reading Below
In 1989, Phillips, the recording label, released a 207-song box set titled, ‘De Gainsbourg a Gainsbarre’, which contained many songs by Gainsbourg sung all through his career. 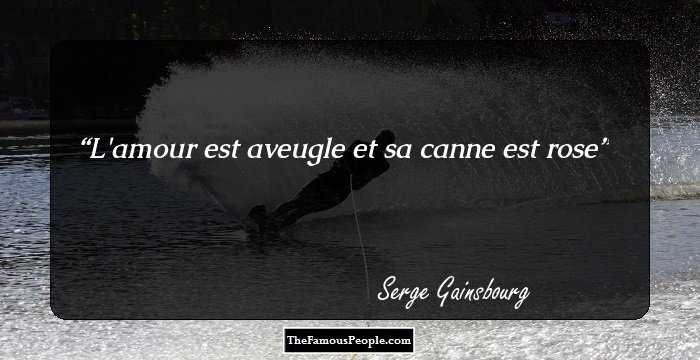 Major Works
In 1969, he released the album, ‘Jane Birkin/Serge Gainsbourg’, also known as ‘Je t’aime… moi non plus’, with Jane Birkin, featuring explicit lyrics and simulated sounds of a female orgasm. Despite censorships, bans and condemnation from the Vatican, it became a popular album and was re-released in the US in 2010.
In 1979, he released ‘Aux Armes et cetera’ a reggae adaptation of the national anthem of France, ‘La Marsellaise’. Despite earning the wrath of soldiers, veterans, and Bob Marley (whose wife had sung the erotic lyrics) it was named the ‘50th greatest French rock album’ by the French edition of the ‘Rolling Stone’ magazine.
Awards & Achievements
In 1996, he was posthumously presented the ‘Cesar Award’ for ‘Best Music Written for a Film’ for the movie, ‘Elisa’. 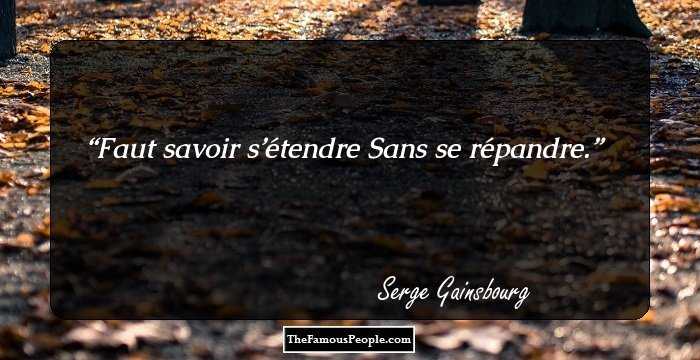 Personal Life & Legacy
He married Elisabeth Levitsky on November 3, 1951 and separated from her in 1957.
He married Francoise-Antoinette Beatrice Pancrazzi in 1964, whom he divorced in 1966. They had two children, Natacha and Paul.
He was in love with the singer, Jane Birkin and many claimed that they were married, however, their daughter, Charlotte, refuted these claims.
He had a son, Lucien, in 1986 with another partner, Bambou.
A heavy smoker during his lifetime, he died of a heart attack in his sleep. He was interred in Montparnasse Cemetery, in Paris.
Trivia
The 18-year old singer France Gall was mortified and hid herself away for weeks when she finally learnt the truth about the double entendre and sexual inference employed in the lyrics of ‘Les Sucettes’ as she thought the song was about lollipops.
Recommended Lists:
Singers #1383
You May Like

Quotes By Serge Gainsbourg | Quote Of The Day | Top 100 Quotes

See the events in life of Serge Gainsbourg in Chronological Order