Sebastian Kurz is an Austrian politician who is currently serving his second term as the Chancellor of Austria and is the chairman of the Austrian People's Party (ÖVP). He previously served his first term from December 2017 to May 2019 before being ousted following a 'motion of no confidence' in the wake of the Ibiza-gate scandal involving his coalition partners from the Freedom Party. He was the Foreign Minister of Austria for four years and State Secretary of the Interior for Integration for over two years. Prior to his successful run for the Viennese State Diet in 2010, he was a longtime member of the Young People's Party (JVP) and remained its chairman for nearly a decade. He is the youngest chancellor in Austrian history and the youngest head of government in the world. His unprecedented coalition government of the centre-right ÖVP and the centre-left The Greens has the potential of ushering a new type of politics throughout Europe. Known for his immigration and social policies, he is considered the face of the traditional conservative movement in Austria, as well as Europe. He was instrumental in the closure of the Western Balkan route blocking refugee influx into Europe. Image Credit
https://www.youtube.com/watch?v=yT60dd6bOdE
( The Organization for Security and Co-operation in Europe (OSCE)) Austrian People
University Of Vienna
Tall Celebrities
Tall Male Celebrities
Virgo Leaders
Childhood & Early Life
Sebastian Kurz was born on August 27, 1986, in Meidling, the 12th district of Vienna, Austria, into the Roman Catholic family of Josef Kurz, an engineer, and Elisabeth, a grammar school teacher. His maternal grandmother, Magdalena Müller, a Danube Swabian born in the Kingdom of Serbs, Croats and Slovenes, had fled from her home town Temerin during World War 2 and settled in Zogelsdorf, now in Austria.
He attended elementary school from 1992 to 1996 before earning his Matura certificate from the Erlgasse Grammar School in Vienna in 2004. After completing compulsory military service in 2004-05, he enrolled into a law course at the University of Vienna, but dropped out before graduating to pursue a career in politics.
Continue Reading Below
You May Like

The Best Black Actresses Of All Time
Early Politics
Sebastian Kurz joined the Young People's Party, the youth wing of the conservative Austrian People's Party, in 2003, and became chairman of the JVP for Vienna in 2008. He was elected federal chairman of JVP with 99% votes in 2009, and was responsible for coining the controversial electoral slogan of the People's Party, 'Black Makes Cool', before the 2010 Viennese state election.
He was a deputy chair of the People's Party in Vienna in 2009-2016 and a member of the Viennese State and Municipality Diet in 2010-11. As a member of the Viennese State and Municipality Diet, he advocated generational equality via fair pensions.
He was reelected as the JVP federal chairman with 100% votes in 2014, but handed over the office to attorney Stefan Schnöll in 2017.
Career
As a reward for his contributions to local election campaigns in Vienna, Sebastian Kurz was rewarded with his appointment as State Secretary of the Interior for Integration in April 2011. In this capacity, he suggested extra mandatory kindergarten year for children lacking language skills, launched the 'Together:Austria' campaign to help integrate immigrants into the Austrian culture, and sought amendments to the Austrian citizenship law.
He won the most direct votes among all the candidates to secure win in the 2013 Austrian legislative election, following which he resigned from the parliament and became the Minister of Foreign Affairs in December. At 27, he was the youngest foreign minister of Austria, as well as the youngest top diplomat in Europe.
As Foreign Minister, he prioritized Western Balkans relations and organized the closing of the EU’s eastern borders to migrants and refugees in a deal with neighboring countries despite protests from the EU and UN. While closing the border between Greece and Macedonia severely reduced refugee inflow and left tens of thousands of migrants stranded, it was seen as a diplomatic achievement that increased his prospects as a chancellor.
During his final year as Austrian Foreign Minister, he also served as the chairman of the Organization for Security and Cooperation in Europe (OSCE), and proposed an 'act-on-act system' for lifting EU sanctions against Russia. Kurz, whose tenure as Foreign Minister ended on December 18, 2017, was a member of the National Council for a brief period between November 2017and January 2018.
While it was speculated in the media for a long time, following the resignation of ÖVP chairman Reinhold Mitterlehner in May 2017, Kurz was nominated for the post and was officially elected on July 1st. However, he declined to succeed Mitterlehner as Vice-Chancellor of Austria, and focused on the 2017 legislative election with a three-part program that put emphasis on tax cuts, compulsory education and stricter immigration system.
His party led the election results with 31.5% in the popular vote on October 15, 2017, but lacking clear majority, he began negotiations with the far-right Freedom Party ten day later to form a coalition. The negotiations were finalized on December 15, following which the first Sebastian Kurz cabinet was sworn in as the 30th Government of Austria on December 18, 2017.
As the chancellor, he introduced 'Family Bonus Plus', a plan that offered bonus tax deductions for parents, made major changes to basic income and unemployment insurance, and legalized maximum 12 working hours per day. Following up on campaign promises, he took initiative to reduce illegal migration, blocked social security benefits to unemployed immigrants, and enacted compulsory German language classes to help in integration.
On May 17, 2019, his coalition partners, Freedom Party chairman Heinz-Christian Strache and deputy chair Johann Gudenus, were implicated in a sting operation known as the Ibiza-gate political scandal. In a secretly filmed video of a meeting in Ibiza, Spain, the two leaders were seen offering government contracts for positive news coverage to a woman posing as a niece of Russian businessman Igor Makarov.
Strache immediately withdrew from all political posts, but against his wishes, Kurz ended the ÖVP-FPÖ coalition and also sought to dismiss Interior Minister Herbert Kickl, following which all Freedom Party ministers resigned. Losing majority in the parliament, Kurz faced a motion of no confidence backed by both the opposition, Social Democrats (SPÖ), and his former coalition ally, Freedom Party, leading to his removal on May 28, 2019.
In the September 2019 legislative election, the People's Party secured a landslide victory with 37.5% of the votes, and subsequently entered negotiations for a coalition with the Green Party, which had registered a major comeback. After the two parties finalized the negotiations to form an unprecedented coalition, Kurz was again sworn in as Chancellor on January 7, 2020, forming a government with a majority of female cabinet members.
Family & Personal Life
Sebastian Kurz has been in a longtime relationship with Susanne Thier since the two were in school, and made first public appearance at a New Year's Eve party when they were 18. A business education graduate, Thier works as a commissioner in the public affairs department at the Ministry of Finance and rarely makes public appearances with Kurz on special occasions.
Trivia
An official biography of Sebastian Kurz, written by Austrian journalist Judith Grohmann, was released in September 2019, months after his ouster from power following the Ibiza-gate scandal. It was widely criticized for its fawning style resembling a romance novel and was mocked on social media with the '#50ShadesOfKurz' hash tag.

See the events in life of Sebastian Kurz in Chronological Order 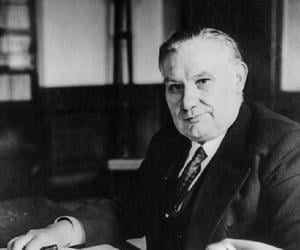