Samuel Phillips Huntington was an American political scientist and writer who rose to fame with his thesis ‘The Clash of Civilizations?’ which he later expanded into a book ‘The Clash of Civilizations and the Remaking of World Order.’ A very prominent political scientist, he specialized in defense and international affairs, though his work covered diverse fields of political science. He played an important role as a political commentator on national debates on US Foreign Policy. After earning his doctorate from the Harvard University, he began teaching there. He specialized in American politics at the beginning of his career, later branching into other areas such as foreign policy, comparative politics, international relations and modernization. Huntington, along with Warren Demian Manshel founded an academic quarterly, ‘Foreign Policy’ in 1970 which was later changed into a bimonthly magazine. Huntington was a prolific writer and had published major works on multiple fields like defense policy, American political ideology, national security strategy, transnational organizations, processes of democratization, etc. He wrote, co-wrote or edited 17 books and numerous scholarly articles. He was an original thinker and many of his works were considered to be highly controversial at the time of their publication. Each one of his books dealt with a central political issue and his writings helped shape the American viewpoints on political development. American Celebrities
American Men
Yale University
Harvard University
University Of Chicago
Childhood & Early Life
Samuel P. Huntington was born in New York to Richard Thomas Huntington, a journalist and Dorothy Sanborn Phillips, a writer. His maternal grandfather John Sanborn Phillips was a famous publisher.
He attended Stuyvesant High School, New York before graduating with distinction from the Yale University in 1946. He served a short stint with the US army before continuing his higher education.
He earned his master’s degree in political science from the University of Chicago in 1948, after which he attended the Harvard University from where he completed his Ph.D. in political science in 1951. 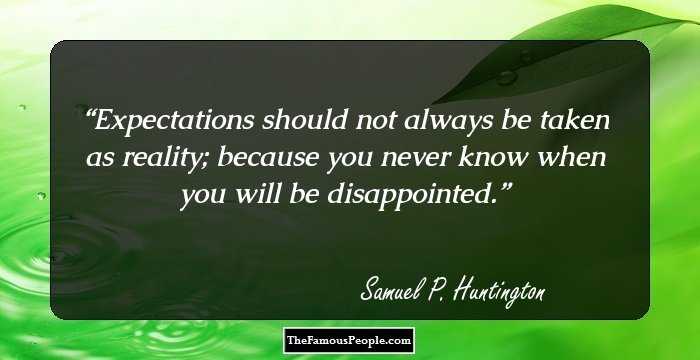 Quotes: You, Never, Will
Continue Reading Below
You May Like

The Hottest Male Celebrities With The Best Abs
Career
After earning his doctorate, he joined the faculty of the Harvard University where he taught from 1951 to 1958. He left in 1959 when his tenure was not renewed.
He was appointed as the associate director of the Institute for War and Peace studies at Columbia University in 1959 where he served till 1962.
In 1962, he returned to Harvard University and taught there for many years before being forced to retire because of ill health in 2007. There he also served two terms as the Chairman of the Department of Government (1967–69; 1970–71).
Apart from his academic career, he also acted as a foreign policy adviser in Hubert H. Humphrey's 1968 campaign for president and served in the Carter Administration on the National Security Council staff as Coordinator of Security Planning in 1977–78.
He was the Director of the Harvard Center for International Affairs for 12 years from 1978 to 1989.
He served as president of the American Political Science Association in 1986–87.
Huntington also served as the chair of the Harvard Academy for International and Area Studies from 1996 to 2004. 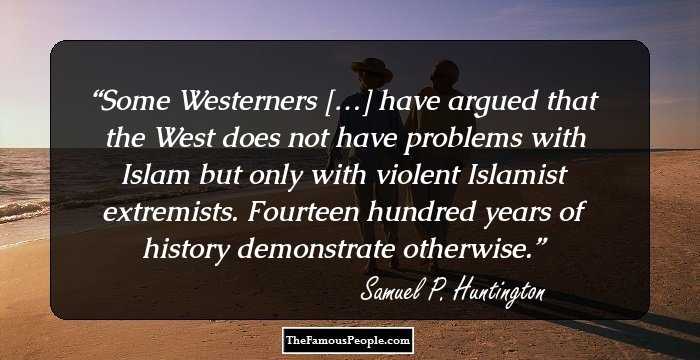 Quotes: History
Major Works
Huntington’s first book ‘The Soldier and the State: The Theory and Politics of Civil-Military Relations’ was published in 1957. In this book he examined the relationship between political power and military professionalism.
Continue Reading Below
In his next book ‘Political Order in Changing Societies’, published in 1968, he challenged the orthodoxies of the 1960s in the field of development. He showed that the lack of political order and authority were the most serious problems of developing nations.
Along with Warren Demian Manshel, Huntington co-founded the journal ‘Foreign Policy’ in 1970. Originally the journal was a quarterly, though now it has changed to be a bi-monthly magazine.
In his 1991 book ‘The Third Wave: Democratization in the Late Twentieth Century’, he analyzed the global trend of transition of a range of countries from non-democratic to democratic political systems during the 1970’s and 1980’s.
In 1993 he published his highly controversial thesis ‘The Clash of Civilizations?’ in which he predicted that the world will be divided into seven or eight large civilizations based on religious, historical, traditional, and cultural values, and conflicts will occur between the diverse civilizations.
He expanded his thesis ‘The Clash of Civilizations?’ and published a book titled 'The Clash of Civilizations and Remaking of World Order’ in 1996. The book provoked considerable debate at the time of its publication, but has gained much in significance post the September 11, 2001 terror attacks on the US.
His last book ‘Who Are We? The Challenges to America's National Identity’ was published in 2004. In this book he analyzed the threats to a unified American national identity.
Awards & Achievements
Huntington was the winner of the Grawemeyer Award in 1992 for “Ideas Improving World Order”. 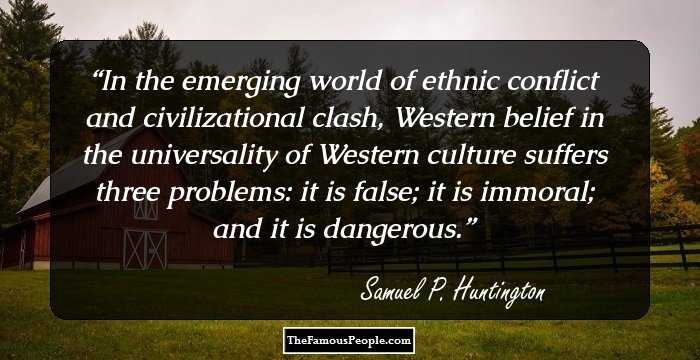 Quotes: Culture, Belief
Personal Life & Legacy
Samuel Huntington was married to Nancy Arkelyan Huntington. They had been married for 51 years at the time of his death. He had two sons and four grandchildren.
He died of congestive heart failure at the age of 81.
Trivia
He was influenced by the views of Reinhold Niebuhr, an American theologian and commentator on politics and public affairs.
Although famous for writing books that generated wide-spread controversy and debate, in his personal life he was known to be a very calm and soft-spoken person.
You May Like

See the events in life of Samuel P. Huntington in Chronological Order