Ruby Rose is an Australian model, television host, actor, DJ, recording artist, and amateur boxer. She worked as a VJ on ‘MTV’ Australia, a role which brought her recognition in the entertainment industry. She started her career as a model, featuring on prestigious magazines and representing renowned fashion brands, such as ‘Maybelline’ and ‘Nike.’ She became a television host for ‘MTV’ as the job allowed her to be herself, in contrast to her previous work as a model. She later appeared as a guest on many television shows, and was cast to play the role of ‘Stella Carlin’ in ‘Orange Is the New Black.’ She showed her acting prowess while playing ‘Stella Carlin,’ and subsequently, landed important roles in blockbuster movies, such as 'Resident Evil: The Final Chapter,' 'xXx: Return of Xander Cage,' and 'John Wick: Chapter 2.' Apart from her modeling, hosting, and acting roles, she also established herself in the field of music with the release of her single 'Guilty Pleasure.' She later wrote and directed the single 'On Your Side' by ‘The Veronicas.’ Ruby Rose, who is also known for her charity work, posed for a photoshoot as part of PETA’s ‘I'd Rather Go Naked Than Wear Fur’ campaign, showcasing her love for animals and tattoos. Katherine Langford
20th March In History
DID WE MISS SOMEONE?
CLICK HERE AND TELL US
WE'LL MAKE SURE
THEY'RE HERE A.S.A.P
Quick Facts

Australian People
Actresses
TV Presenters
Australian Women
Pisces Models
Childhood & Early Life
Ruby Rose Langenheim was born on March 20, 1986, in Melbourne, Australia. She was raised by her mother, Katia Langenheim, who left Ruby’s father when Ruby was two years old.
Her mother is an artist who exhibits her works in Melbourne. Famous Australian boxer Lionel Rose is her godfather, while Alec Campbell, the last surviving ‘Australian Battle of Gallipoli’ soldier, is her great-grandfather.
She attended ‘University High School’ where she faced severe bullying. She had to be hospitalized after being physically hit at the age of 16. She later enrolled at ‘Footscray City College.’
Rose, who came out as a lesbian at the age of 12, felt that she was bullied because of her sexual orientation. It was later revealed that she was also sexually abused by a relative when she was a child. She suffered from depression and even attempted suicide when she was young. 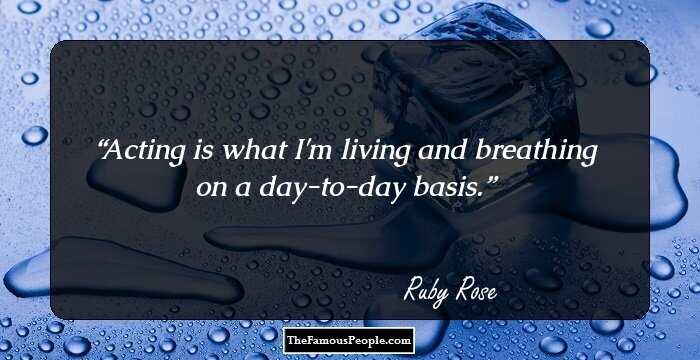 Continue Reading Below
Modeling Career
Ruby Rose first gained recognition in 2002 when she joined the 'Girlfriend Model Search' competition, organized by the Australian magazine 'Girlfriend.' She was one of the finalists, and finished second after Catherine McNeil.
After a short break from modeling, she released her own capsule fashion line from the Australian fashion label ‘Milk and Honey’ in 2010. She also collaborated with the street footwear brand ‘Gallaz.’
In 2010, she became the face of the popular international beauty brand ‘Maybelline.’ She later became the face of ‘Urban Decay Cosmetics’ in March 2016, and the face of Swarovski 'Urban Fantasy' FW17 Collection in May 2017.
In 2014, she designed and released ethical street-wears under the clothing range 'Faircloth Lane,' in collaboration with her then partner Phoebe Dahl. She went on to feature on a number of leading magazines, such as 'Vogue Australia,' 'InStyle Magazine,' 'Maxim,' and 'New York's Inked Magazine.' 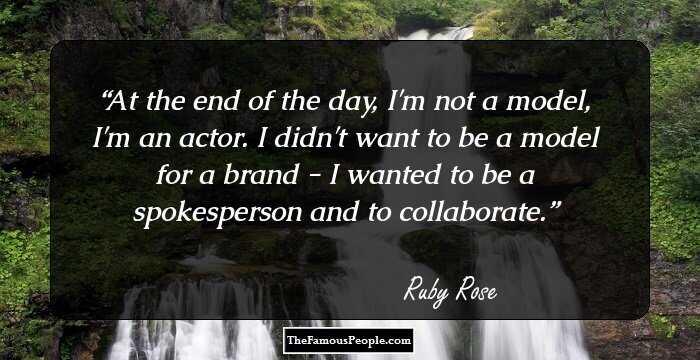 Television Career
In 2007, Ruby Rose decided to shift from modeling to television, and participated in the national 'MTV VJ Search' along with 2000 other contestants. She was hired at the end of the three-week program, and went on to host 'MTV Australia' till 2011.
During 2009, she appeared as a guest in the TV series 'Talkin' 'Bout Your Generation,' in which she represented ‘Generation Y’ along with comedian Josh Thomas. The same year, she was a guest judge on the episode 'Media Virgins' of 'Australia's Next Top Model.' She also appeared as a correspondent for the live finale of the show.
She was a co-host on the Australian television news talk show 'The 7pm Project' from 2009 to 2011, after which she left the program. She also hosted the red carpet event at 'MTV Australia Awards 2009.'
In 2010, she was the host of the Australian version of 'Ultimate School Musical,' which follows a group of school-going teenagers for six weeks as they attempt to produce high quality music. That year, she became an official correspondent of ‘Foxtel’ for the ‘Vancouver Winter Olympics’ after hosting the ‘Foxtel Mardi Gras’ for three years straight.
Continue Reading Below
She reportedly stayed unemployed for two years before landing her breakthrough acting opportunity in the ‘Netflix’ drama series 'Orange Is the New Black' in 2015. Casting agent Jennifer Euston selected her for the recurring role of ‘Stella Carlin,’ whom she portrayed throughout season three and season four of the show.
In 2015, she also appeared in the guest role of ‘service robot Wendy’ in the science fiction series 'Dark Matter' and co-hosted the 'MTV Europe Music Awards.'
In January 2017, she made a guest appearance on 'The Ellen DeGeneres Show.' Later in the year, she appeared as a contestant on the musical reality competition 'Lip Sync Battle.'
In 2018, she was cast to play Batwoman in the superhero TV series ‘The Flash.’ She went on to reprise the role in series, such as ‘Arrow’ and ‘Supergirl.’ In 2019, she was cast to play the title role in ‘The CW’ network's television series ‘Batwoman.’
Film Career
Ruby Rose made her film acting debut in the Australian comedy film 'Suite for Fleur,' which released in 2008. Her next opportunity to act in a film came in the year 2013 when she was cast in the film 'Around the Block.'
In 2014, when she could not audition for roles as she was unable to hire a manager or an agent, she decided to produce the short film 'Break Free.' The video went viral, receiving millions of views, and opened up numerous acting opportunities for her. Subsequently, she appeared in the TV series 'Orange Is the New Black.'
She then worked in the 2016 animated movie 'Sheep and Wolves,' where she voiced a character named ‘Bianca.’ The same year, she appeared as ‘Abigail’ in 'Resident Evil: The Final Chapter,' the final installment in the ‘Resident Evil’ film series.
She played ‘Jaxx Herd’ in the 2018 science fiction action film ‘The Meg.’ The same year, she was cast to play ‘Grace’ in an action thriller film titled ‘SAS: Red Notice.’ 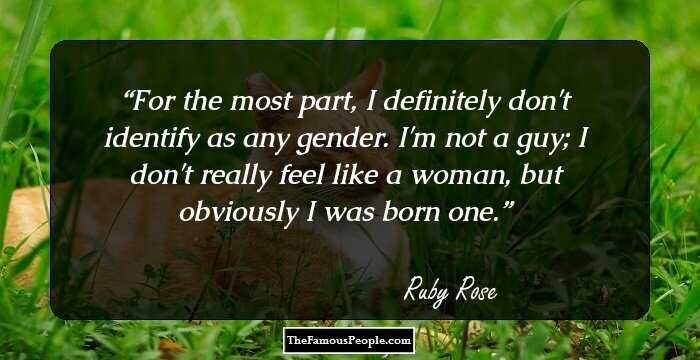 Major Works
Ruby Rose earned critical acclaim for her portrayal of ‘Stella Carlin’ in 'Orange Is the New Black.' The breakout star of the third season of the show, Rose became a sensation among the show’s audience, especially women.
Awards & Achievements
Ruby Rose won the 'ASTRA Award' for 'Favorite Female Personality' in 2009. She was named the 'Woman of the Year' by 'GQ Australia' in 2015. That year, she also won the 'Screen Actors Guild Award' for ‘Best Ensemble in a Comedy Series’ for 'Orange Is the New Black.'
Personal Life & Legacy
Ruby Rose, who is openly gay, considers herself gender-fluid, but does not mind feminine pronouns. She stated that while growing up, she used to save money for gender transition surgery, but later became comfortable with her body.
Over the years, she has dated a number of women, including Lyndsey Anne McMillan, Catherine McNeil, and Lola Van Vorst. She was engaged to fashion-designer Phoebe Dahl between 2014 and 2015. From 2016 to 2018, she dated singer Jess Origliasso of ‘The Veronicas.’ She had previously dated Origliasso in 2008.
Trivia
During her teenage days, when she was suffering from depression, her mother bought a beachside shack in Kilcunda which served as a getaway house. It was also the training ground for her godfather Lionel Rose.

See the events in life of Ruby Rose in Chronological Order