Robert William Service was a British-Canadian poet and writer of his time. This biography provides detailed information about his childhood, life, profile and timeline. DID WE MISS SOMEONE?
CLICK HERE AND TELL US
WE'LL MAKE SURE
THEY'RE HERE A.S.A.P
Popularity Index
Writers #925
Robert W. Service
Quick Facts

William Gibson
Robert William Service, one of the most proficient poets and writers, is till date remembered for contributing some of the most celebrated works in literature. It was his deep embedded passion for reading and writing since an early age that paved his way for future. While he was inspired by reading the works of Robert Browning, Lord Alfred Tennyson and John Keats in his initial years, later the works of Rudyard Kipling and Robert Louis Stevenson framed much of his writing style. Interestingly, despite taking up various works and living as a cowboy, the humble living condition did not dampen his interest in writing. The passion instead kindled and only blossomed finally resulting in the publication of his first work, ‘Songs of a Sourdough’. The book met with overwhelming response and catapulted Service’s reputation as a poet by miles. What followed was a string of highly successful works which Service wrote drawing inspiration from the lore and tales of men and their experiences. He even made a huge impact in the field of thriller novels by coming up with highly successful novels. Novelists
British Men
Canadian Men
French Men
Childhood & Early Life
Robert William Service was the eldest of the ten children born to Robert Service in Preston, Lancashire, England. His father, originally from Kilwinning, Scotland, was a banker by profession.
When young Service turned five, he moved to Kilwinning, Scotland, to live with his paternal grandfather and maiden aunts. On his sixth birthday, he penned his first ever verse, which was basically a grace.
His parents shifted base to Glasglow, Scotland, when he was nine years old. Academically proficient, he attended some of the finest schools in Glasglow. He graduated from Glasgow's Hillhead High School.
It was during his years at school that he developed a lifelong interest in books and poetry. Reading exposed him to adventure and fun and inspired him to go out and explore the world to extinguish his desires and curiosities.
He took up various odd jobs, starting with working at a shipping office that soon closed down and later on following his dad for a position at a suburban branch of the Commercial Bank of Scotland.
While at the bank, since he did not have too much work pressure, he often indulged in reading the works of Robert Browning, Lord Alfred Tennyson, and John Keats. He also started writing professionally and was reportedly selling his verses by then.
His interest and passion for poetry soon found him a seat at the University of Glasglow for a course in English Literature. As much as he was applauded for being the brightest student of the class, his audacity and boldness irked his professors. As a result of this, he left the university after a year. 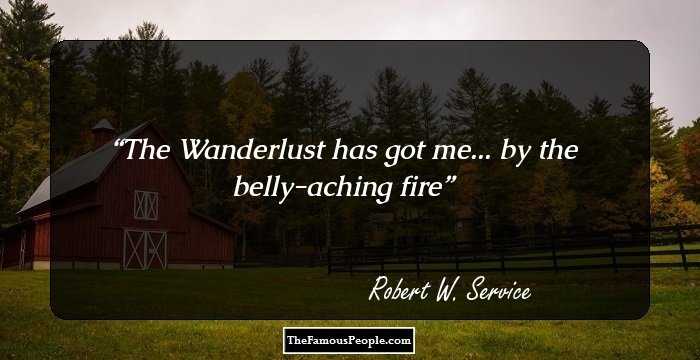 Male Poets
French Poets
Male Writers
British Poets
Career
To fulfil his long-drawn wish to dig into his self and bring out his true identity, he set sail to Western Canada in 1895 to become a cowboy. A suitcase with clothes, a letter of reference from a bank and some savings was all that he had taken with him on his voyage to Montreal.
Upon reaching Montreal, he took a train to Vancouver Island. It was there that he realised his dream of becoming a cowboy. The experience called for working in the ranch and meeting colourful personalities all along.
He moved towards North America, wandering from California to British Columbia. All through the journey, he took up various jobs.
In 1899, during his stay in Cowichan Bay, British Columbia, he worked as a store clerk. Coincidently, his passion for writing poetry got six of his works published in the Victoria Daily Colonist by July 1900
The positive response for his printed verses encouraged him to write further. In the following two years, more of his works were printed in the Colonist, including ‘Music in the Bush’ and ‘The Little Old Log Cabin’.
In 1903, his letter of reference from the Commercial Bank of Scotland finally turned helpful as he found himself a position at the Canadian Bank of Commerce. He started working at the bank’s branch in Victoria, British Columbia
While working at the bank, he was shifted to the branch in Kamloops in the middle of British Columbia. In 1904, he was further transferred to the Whitehorse branch in the Yukon, a relatively new town.
Working for the bank did not dampen his passion for poetry as he continued writing his verses. It was during this time that he wrote the poems, ‘The Shooting of Dan McGrew’ and ‘The Cremation of Sam McGee’
By then, he had written enough poems to be published together in a book. Collecting all his works, he transferred the same to his father to Toronto.
Continue Reading Below
‘Songs of a Sourdough’ was the title of his assorted works, which became a massive hit. The book sold 1700 copies in advance from galley proofs and further had an overwhelming demand. Even before its official release date, the book had been through seven printing.
The substantial success of ‘Songs of a Sourdough’ led to a release of an edition in New York, Philadelphia, and London. The book earned him $100,000.
By 1908, he had completed his three years of service in the bank which entitled him a mandatory paid leave for three months, which was a standard practice for bank employees serving in the Yukon
Upon resuming work, he was transferred to Dawson where he met veterans of the Gold Rush. He spent a considerable amount of time listening to the lore of the men. It was these reminisces that he employed to write his second book, ‘Ballads of a Cheechako’ in 1908. Much like its predecessor, it met with huge success.
In 1909, he officially resigned from his duties at the bank. Henceforth, he started writing his first novel, ‘The Trail of ‘98’. The novel was published by a publisher in New York and immediately became a bestseller.
Gaining immense financial freedom from the success of his printed works, he travelled to Paris, the French Riviera and Hollywood. He returned to Dawson City in 1912 to pen his third book of poetry titled ‘Rhymes of a Rolling Stone’.
Leaving Dawson City in 1912, he served as a correspondent for the Toronto Star. The following year, he moved to Paris. Though he was rejected for service on account of varicose vein, he took up various works as a war correspondent, stretcher bearer and ambulance driver.
In 1916, he penned ‘Rhymes of a Red Cross Man’ which was dedicated to men who lost their lives in World War I. Five years later he came up with his next work, ‘Ballads of a Bohemian’.
In the following years, he penned thriller novels including, ‘The Poisoned Paradise’, ‘A Romance of Monte Carlo’ and ‘The Roughneck ‘A Tale of Tahiti’. In the 1930s, ‘Ballad of Lenin's Tomb’ was published.
Continue Reading Below
During World War II, he shifted to California along with his family. In 1942, he played as himself in the movie ‘The Spoilers’ alongside Marlene Dietrich, John Wayne and Randolph Scott. From 1949 to 1955, he published six books of verse. Additionally, he wrote two volumes of autobiography, ‘Ploughman of the Moon’ and ‘Harper of Heaven’. 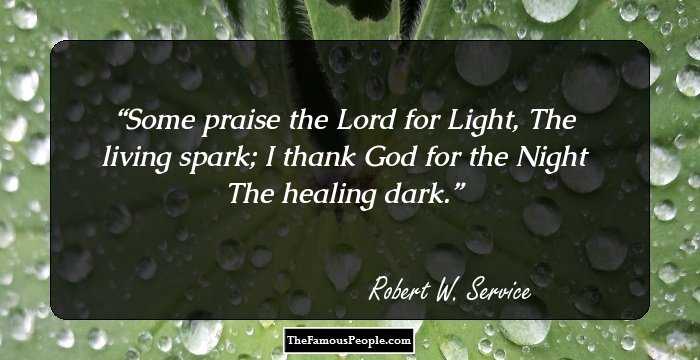 British Writers
Canadian Writers
French Novelists
Capricorn Writers
Personal Life & Legacy
He fell in love with Constance MacLean at a dance in Duncan B.C. while living in Yukon. However, since MacLean was looking for an educated and financially well-off partner, she did not pay heed to his emotions.
Upon achieving academic success, he vowed his love to Constance MacLean again. Though it is reported that she agreed to get engaged to him, not much is known as to what happened between them which led to her marrying Leroy Grant.
Subsequently, he married a French woman, Germaine Bougeoin in 1913. The couple lived in Lancieux, C�tes-d'Armor, in the Brittany region of France.
He breathed his last on September 11, 1958. He was 84 years of age then.
Various schools, colleges, public houses and roads have been named after him. Additionally, the Canadian postage services commemorated his work with a stamp dedicated to him in 1976. 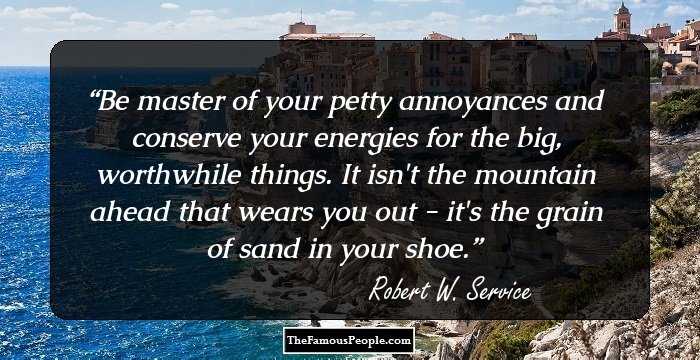 British Novelists
Canadian Novelists
Capricorn Men
Trivia
This poet and writer of the famous book, ‘Songs of Sourdough’ is famously referred to as the ‘Bard of Yukon’.
You May Like

See the events in life of Robert W. Service in Chronological Order