Margaret Atwood is a Canadian writer, best known for her novels, short stories and poems. She decided to pursue writing as a career in the early years of her life. She is a feminist by nature and her fiction revolves around a woman character in most of her novels. Her writing has an impact on the reader’s mind and one is forced to think about the connection between reality and fiction after reading her stories and poems. Her fictional work consists of historical as well as scientific backdrops with a strong and independent woman as its central character. Her stories have realistic yet imaginative textures which converge thoughtfully with open endings that tend to make a greater impact on the society. Many of her stories have been adapted into stage plays and movies in addition to the translation of her works to almost 30 languages. She is considered as a literary genius with the ability to connect her fictional character with the deepest emotions of the reader and society. She is an international award winning prolific author and also a well known humanist. She is also the inventor of LongPen technology, which enables remote writing. Her wide range of work reflects her unique personality, which also makes her a leading public figure and cultural commentator. Her literary work is a precious gift to the society which undoubtedly makes her immortal. Steven Crowder
DID WE MISS SOMEONE?
CLICK HERE AND TELL US
WE'LL MAKE SURE
THEY'RE HERE A.S.A.P
Quick Facts

Canadian People
Novelists
Essayists
Activists
Literary Critics
Childhood & Early Life
She was born on 18 November, 1939 in Ottawa, Canada to Margaret Dorothy, a former dietician and nutritionist and Carl Edmund Atwood, an entomologist.
As an entomologist, her father used to work mostly in the forest and therefore she spent most of her childhood in the backwoods of Quebec. Writing was one of her many interests, away from school.
She went to a regular full-time school only after eighth grade and at the age of 16, she decided to pursue the career of a professional writer.
She completed her schooling in 1957 from Leaside High School, Toronto. In 1961, she graduated with ‘Bachelor of Arts in English’ degree from Victoria College in the University of Toronto. During her graduation, she published her poems and articles in Acta Victoriana, the college literary journal.
In 1961, she privately printed a book of poems, ‘Double Persephone’, and became the winner of E.J.Pratt medal.
She obtained her master’s degree from Harvard’s Radcliffe College in 1962 and pursued further studies at Harvard University, but was unable to finish her dissertation. 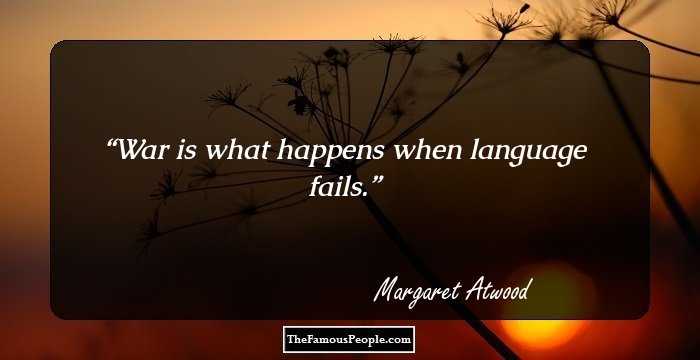 Quotes: War
Continue Reading Below
Career
Her first major work was a book of poetry, ’The Circle Game’ published in 1964 which was highly praised worldwide and honored in Canada. After that, she never looked back and went on to write numerous novels, short stories, poems, children books, screenplays and e-books.
Her 1969 feminist novel, ‘The Edible Women’ was another masterpiece about a woman who cannot eat and feels that she is being eaten.
Her 1972 novel, ‘Surfacing’, is about a daughter’s search for her missing father and is considered one of the best novels of her career.
She wrote ‘Life Before Man’ in 1979, a novel with three principal characters with each of them having their own perspective on events occurring in each chapter. The book was positively reviewed by the New York Times.
She also edited many books, including ‘The New Oxford Book of Canadian Verse in English’ in 1983 and ‘The Oxford Book of Canadian Short Stories in English’ in 1986, with Robert Weaver.
Her vision of a scientific dystopia in the form of a novel, ‘Oryx and Crake’, was short-listed for the 2003 Man Booker Prize for Fiction and for the 2004 Orange Prize for Fiction.
She is currently involved in ‘Future Library Project’. The project aims at collecting one original story by a popular writer every year until 2114, and the story will be shared with the world only then. Atwood will be the first contributor to this project. 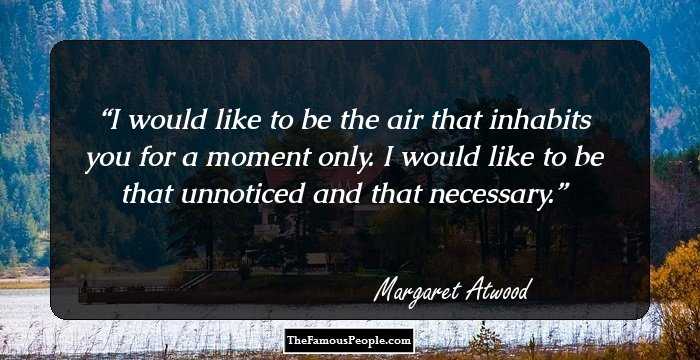 Quotes: You, Like, I
Major Works
She invented ‘LongPen’, concept of remote robotic writing technology and is currently the Chairman and CEO of Syngrafii Corporation, holder of various patents to LongPen technology.
Continue Reading Below
Her 1986 novel, ‘The Handmaid’s Tale’ was an extraordinary piece of literary work on science fiction which received many accolades. She regarded it as speculative fiction instead of science fiction, the difference being that speculative fiction could happen.
Her principal work of literary criticism, ‘Survival: A Thematic Guide to Canadian Literature’, is still considered the standard introduction for Canadian studies programs internationally.
Her 2000 novel, ‘The Blind Assassin’, a work of historical fiction with the major events of Canadian history forming an important backdrop won her the ‘Booker Prize’.
Awards & Achievements
She received two Governor General’s Awards; one for her book of poetry ‘The Circle Game’ in 1966 and another one in 1985, for her novel, ‘The Handmaid’s Tale’.
She received St. Lawrence Award for Fiction for her short fiction collection, ‘Dancing Girls’, in the year 1977.
She was honored as the ‘Humanist of the Year’ by American Humanist Association in 1987.
Her 1996 novel, ‘Alias Grace’, a murder fiction inspired by actual events won her the Canadian Giller Prize and she was shortlisted for the 1996 Booker Prize, 1996 Governor General’s Award and 1997 Orange Prize for Fiction.
In 2000, she was awarded the prestigious Booker Prize for her extraordinary novel, ‘The Blind Assassin’.
She is currently holder of 20 honorary degrees from prestigious universities around the world including Harvard University. 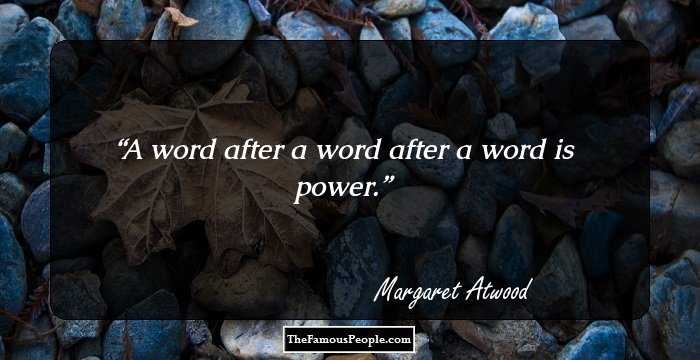 Quotes: Power
Personal Life & Legacy
In 1968, she married Jim Polk but the marriage lasted for only five years. They got divorced in 1973.
Afterwards, she got involved in a relationship with a fellow novelist, Graeme Gibson and their daughter, Eleanor Jess Atwood Gibson, was born in 1976. She currently lives with Graeme Gibson and their daughter in Canada.
At present, there is a Margaret Atwood Society, a Margaret Atwood Newsletter, and an ever-increasing number of scholars studying and teaching her work around the globe.
Trivia
She strongly raises her voice about environmental issues and is the joint honorary presidents of the Rare Bird Club within BirdLife International.
Recommended Lists:
Essayists #3
Writers #50
Activists #34
Critics & Connoisseurs #2

Quotes By Margaret Atwood | Quote Of The Day | Top 100 Quotes

See the events in life of Margaret Atwood in Chronological Order 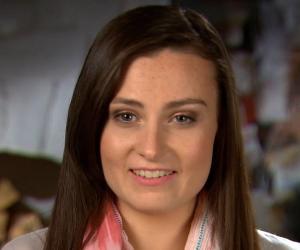