(One of the Most Popular Canadian Authors of All Time)

Advanced Search
Robertson Davies was an influential Canadian playwright, author, journalist and professor. He was one of the instituting owners of Massey College, an institution affiliated with the University of Toronto. As an author, he wrote a number of books, some of which were highly romanticized or set in ancient Europe. The books written by this Booker Prize-nominee include ‘What’s Bred in the Bone’, ‘Leaven of Malice’, ‘World of Wonders’, ‘Murther and Walking Spirits’ and ‘The Cunning Man’. Besides being known for his novels, he also wrote a number of plays throughout his lifetime including, ‘Eros at Breakfast’, ‘The Voice of the People’, ‘General Confession’ and ‘Brothers in Black Art’. With his large repertoire of work, he was considered a literary giant during his time and continues to inspire a number of budding novelists and playwrights today. One of his other qualities that assisted him in his ascent was the fact that he was a brilliant orator. He was adroit, humorous and undaunted to be out-of-date in the eyes of people. He was a man of many words and in his lifetime, he managed to enchant countless readers and audiences through this choice of words. Hence, he was popularly known as the ‘man of letters’. Louise Penny
DID WE MISS SOMEONE?
CLICK HERE AND TELL US
WE'LL MAKE SURE
THEY'RE HERE A.S.A.P
Quick Facts

Canadian Celebrities
Essayists
Playwrights
Canadian Men
Male Writers
Childhood & Early Life
William Robertson Davies was born on August 28, 1913, to William Rupert Davies and Florence Sheppard McKay, in Thamesville, Ontario.
He studied at Upper Canada College from 1926 to 1932 and during this time, he attended the facilities at the Church of St. Mary Magdalene.
After he graduated from college, he studied at Queen’s University, where he contributed to the university paper, ‘The Queen’s Journal’. He soon left Canada and went to study at Balliol College, Oxford from where he received his B. Litt degree in 1938.
In 1939, he published his thesis, ‘Shakespeare’s Boy Actors’, and embarked on an acting career outside London. The following year, he acted in small roles and worked at the Old Vic Repertory Company. 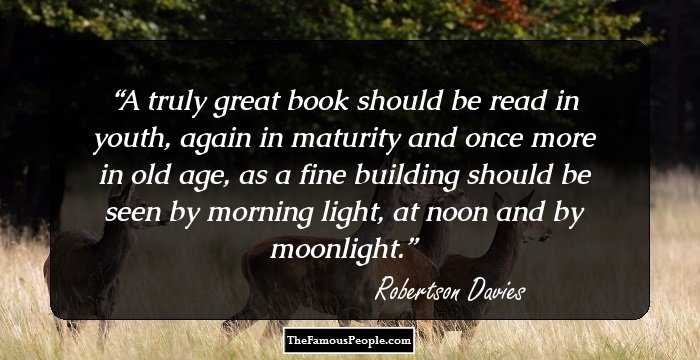 Continue Reading Below
Career
He returned to Canada in 1940 where he got the job of literary editor for ‘Saturday Night’. In two years, he became the editor of the ‘Peterborough Examiner’.
In 1942, he published the thesis, ‘Shakespeare for Young Players: A Junior Course’, followed by his first fictional essay five years later titled, ‘The Diary of Samuel Marchbanks’.
From 1948 to 1950, he diverged from just writing theses and wrote a number of plays including, ‘Overlaid’, ‘Eros at Breakfast’, ‘Hope Deferred’, ‘King Phoenix’, ‘Fortune my Foe’, ‘The Voice of the People’ and ‘At My Heart’s Core’. During this time, he also wrote the fictional essay, ‘The Table Talk of Samuel Marchbanks’.
He published his first novel in 1951, which was the first installment of ‘The Salterton Trilogy’ titled, ‘Tempest-Tost’. During this time, he still served as an editor with the ‘Examiner’. Four years later, he published the second installment of the series titled, ‘Leaven of Malice’.
In the 1950s, he played a major role in initiating the Stratford Shakespearean Festival of Canada, where he served on the board of governors.
From 1952 to 1956, he wrote a series of plays including ‘A Masque of Aesop’, ‘Hunting Stuart’, ‘A Jig for the Gypsy’ and ‘General Confession’.
In 1958, he wrote, ‘A Mixture of Frailties’, which explored the difficulty of sustaining a cultural life in Canada.
In 1960, ‘A Voice from the Attic’ was published, which was a collection of Robertson Davies’ essays. The book became so popular that it was reprinted for several years following its initial publication.
He joined Trinity College at the University of Toronto, where he was appointed as a professor of literature. In 1963, he became the Master of Massey College, where he initiated the tradition of writing and telling ghost stories at yearly Christmas celebrations.
Continue Reading Below
In 1967, he published the third of the ‘Samuel Marchbanks’ books titled ‘Samuel Marchbanks’ Almanack’. The book was published in the form of an almanac. Three years later, he published the theses, ‘A Feast of Stephen’, ‘Stephen Leacock’ and the non-fiction work, ‘Fifth Business’.
After the success of ‘Fifth Business’, he published two more novels, ‘The Manticore’ in 1972 and ‘World of Wonders’, three years later. The three books collectively came to be known as ‘The Deptford Trilogy’.
From 1975 to 1980, he wrote the play, ‘Question Time’ and he also wrote the thesis, ‘One Half of Robertson Davies’ and a collection of essays titled, ‘The Enthusiasms of Robertson Davies’.
After he retired from his position at university, he published a satire publication titled, ‘The Rebel Angels’ in 1981. The same year, he wrote the play, ‘Brothers in the Black Art’.
In 1982, he wrote the libretti ‘Doctor Canon’s Cure’. Two years later, he authored ‘What’s Bred in the Bone’, which earned him a nomination for the ‘Booker Prize’.
In 1988, he published the third installment of the books titled, ‘The Lyre of Orpheus’. The three books combined went on to be known as ‘The Cornish Trilogy’.
His reputation as one of the most illustrious writers at the time was further cemented when he authored ‘Murther and Walking Spirits’, in 1991. Three years later, he wrote a sequel to the same titled, ‘The Cunning Man’. He was working on the third novel, but could not complete it as he passed away. 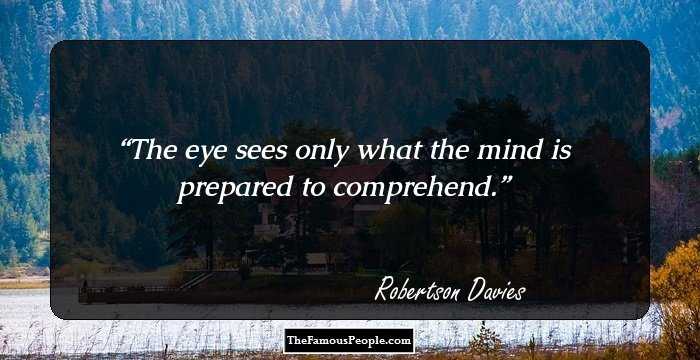 Major Works
From 1970 to 1975, he published ‘The Deptford Trilogy’, which includes the books, ‘Fifth Business’, ‘The Manticore’ and ‘World of Wonders’. This is largely regarded as one of his major works due to its narrative complexity and plot build-up. ‘Fifth Business’, the first in the series, is considered the best from the three novels in the series, which is currently rated 40th on the Modern Library’s list of ‘100 best novels of the 20th century’.
Awards & Achievements
In 1948, he won the Dominion Drama Festival Award for ‘Best Canadian Play’ for ‘Eros at Breakfast’.
He won the Lorne Pierce Medal for his literary contributions in 1961.
In 1972, he was awarded the Governor-General’s Literary Award for ‘English language fiction’ for ‘The Manticore’. 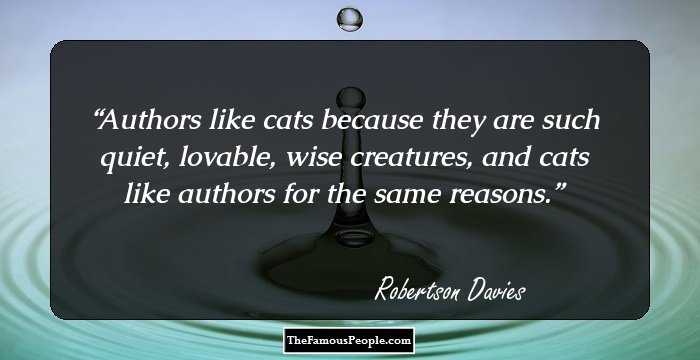 Quotes: Like
Personal Life & Legacy
Robertson Davies married Brenda Mathews, who was a stage manager. His wife was of Australian descent.
He was close friends with John Kenneth Galbraith and was also a close friend of the novelist, John Irving.
He passed away on December 2, 1995, in Orangeville, Ontario. His funeral was covered live and was attended by dignitaries such as Margaret Atwood and Timothy Findlay.
Trivia
This famous Canadian novelist, playwright and professor supported Salman Rushdie when the latter was threatened by a ‘fatwa’ from Ayatollah Ruhollah Khomeini of Iran, in opposition to the author’s, ‘The Satanic Verses’.
Recommended Lists:
Writers #2727

Quotes By Robertson Davies | Quote Of The Day | Top 100 Quotes

See the events in life of Robertson Davies in Chronological Order