Advanced Search
Robert Studley Forrest Hughes was an Australia-born art critic, author and producer of television documentaries. He was an outspokenly expressive and controversial art critic who lived his literary life with an inspirational flair that he owed to artist Francisco Goya, a self confessed artistic motivation. He was as famous on the television as he was in the print media and spent over three decades of his life working as the chief art critic of TIME magazine in New York. With his insightful books and documentaries, Hughes delved into the history of various artistic revolutions in the west and the development of society along with it. Over the years his favorite topic remained Australia, where he was born and brought up, and wrote several books on the artistic side of the country as well as its history of British penal colonies and early European settlement. Other recurring subjects of his prolific writings were Goya, Lucian Freud, fishing, the history of American art, the city of Barcelona and himself. For his exceptional contribution to art, literature and television, Hughes was awarded with honors like, Officer of the Order of Australia, International Emmy Award, etc. Teresa Palmer
28th July In History
DID WE MISS SOMEONE?
CLICK HERE AND TELL US
WE'LL MAKE SURE
THEY'RE HERE A.S.A.P
Quick Facts

Australian Celebrities
Art Critics
TV Presenters
Australian Men
Leo Writers
Childhood & Early Life
Robert Hughes was born on 28 July 1938, in Sydney to Geoffrey Forrest Hughes and Margaret Eyre Sealy. His father was a pilot in the WWI and a lawyer. He died of lung cancer when Hughes was only 12 years old.
While he was growing up, Hughes was expected to become a lawyer as his father and grandfather both were prominent lawyers. He attended St. Ignatius College in Riverview, Australia, and later attended the University of Sydney.
At the University of Sydney Hughes pursued art and architecture, but dropped out of college soon after to take up a job as a cartoonist for the periodical, ‘The Observer’. He was made the art critic at the magazine. 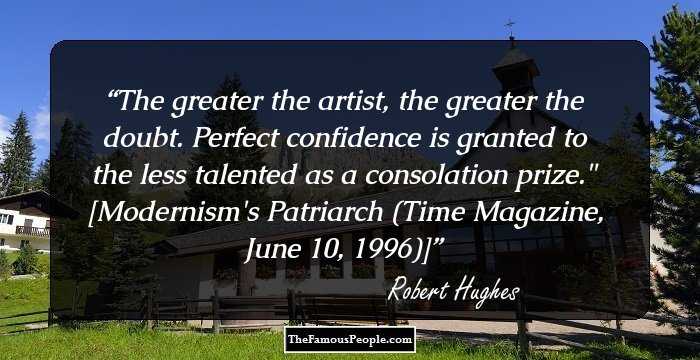 Continue Reading Below
Career
While still working as a art critic with ‘The Observer’, Hughes wrote a piece on the history of Australian painting—‘The Art of Australia’ in 1966. He also contributed to the ‘Oz’ magazine, ‘The Nation’, and ‘the Sunday Mirror’.
Around the same time, he travelled to Europe and settled permanently in London in 1965. It was in London that he wrote for ‘The Spectator’, ‘The Daily Telegraph’, ‘The Times’’, the London-version of ‘Oz’ and ‘The Observer’.
In 1970, Hughes moved to New York, when he was recruited as an art critic by the ‘TIME’ magazine—which he described as a ‘shot in the dark’ both by him and the magazine.
Things went well at the ‘TIME’ and Hughes was hired as a commentator on ABC’s news magazine program ‘20/20’ in 1978. But after the recording of first tape, he was fired and replaced by veteran TV host Hugh Downs.
In 1980, he co-produced, with German producer Reiner Moritz and Lorna Pegram, BBC eight-part series ‘The Shock of the New’. It was based on his book with the same title; the series looked into the development of Modern art.
Hughes published his next book ‘The Fatal Shore’ in 1987 - a book that reviewed the history of British penal colonies and early European settlement of Australia. The book soon became an international bestseller.
In 1997, another of Hughes’ television series ‘American Visions’ released, which evaluated the history of American art since Revolution.
This was followed by documentaries in the 2000s––‘Australian: Beyond the Fatal Shore (2000)’, which was a series of ruminations on modern Australia, and ‘Goya: Crazy Like a Genius (2002), a documentary on Francisco Goya—his favorite artist.
Towards the end of his life, he created a one-hour long update to ‘The Shock of the New’ called ‘The New Shock of the New (2004)’ and published the first part of his memoir, ‘Things I didn’t Know (2006)’.
Continue Reading Below 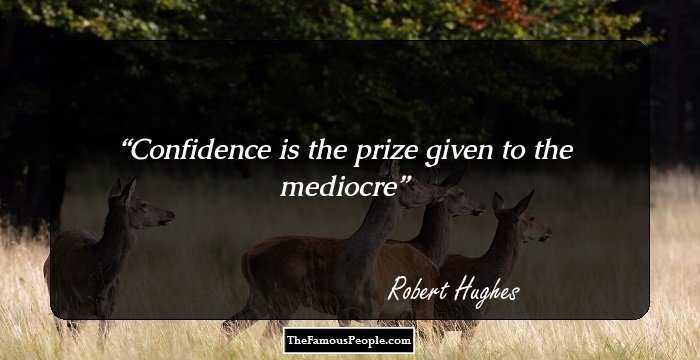 Major Works
‘The Shock of the New’, created by Hughes in 1980 and produced by BBC, is Hughes’ most prominent work. It was based on the development of modern art since the Impressionists and was accompanied by a book with the same title.
Awards & Achievements
Hughes was honored with accolades like: Frank Jewett Mather Award (1982), Golden Plate Award (1988), Officer of the Order of Australia (1991), Membership of the American Academy of Arts and Sciences (1996), Grierson Award (2009), International Emmy Award (2009), etc. 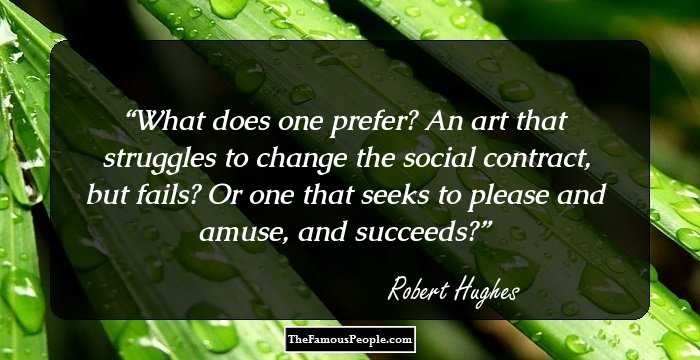 Quotes: Change, Art
Personal Life & Legacy
Hughes was married to Danne Emerson from 1967-1981. The couple met in London and explored the counterculture, of the 1960s, of exploring drug use and sexual freedom together. They had a son Danton Hughes.
He got married for the second time to Victoria Whistler in California. They remained married from 1981-1996.
Hughes third marriage took place in 2001, to Doris Downes, an American artist and art director. The couple remained married until his death. He became stepfather to Downes’ sons - Freeborn Garrettson Jewett IV and Fielder Douglas Jewett.
He died at Calvary Hospital in The Bronx, New York, in 2012 after suffering from a long illness.
Trivia
Hughes faced a near-fatal car accident in south of Broome, Western Australia in 1999. He was driving on the wrong side of the road, while returning from a fishing trip, and collided with another car. He was in coma for 5 weeks. He, ultimately, pled guilty to dangerous driving in 2003 and was fined 2,500 Australian dollars.
Hughes' son, Danton Hughes, a sculptor, committed suicide in 2002.
Recommended Lists:
Media Personalities #2603
Critics & Connoisseurs #139

Quotes By Robert Hughes | Quote Of The Day | Top 100 Quotes

See the events in life of Robert Hughes in Chronological Order