One of the most noteworthy and significant voices of feminism in the 20th century, Germaine Greer is an Australian writer, journalist and academician. She is one of the leading writers in the genre of women’s liberation, women’s movement and gender issues. Her groundbreaking book, ‘The Female Eunuch’ went on to become an international bestseller and also stirred up much controversy. Some of her other notable publications include, ‘Sex and Destiny: The Politics of Human Fertility’, ‘The Change: Women, Ageing and the Menopause’, ‘Shakespeare's Wife’ and ‘The Whole Woman’. She has also been a columnist for ‘The Sunday Times’ and ‘The Guardian’. She has appeared on the television shows such as ‘Nice Time’, ‘Celebrity Big Brother’ and the British BBC mockumentary, ‘Come Fly with Me’. A strong-willed woman, Greer has always been outspoken about her views despite opposition and controversy. Her writings have made an impact on the lives of many woman and even men. Samuel Beckett
DID WE MISS SOMEONE?
CLICK HERE AND TELL US
WE'LL MAKE SURE
THEY'RE HERE A.S.A.P
Quick Facts 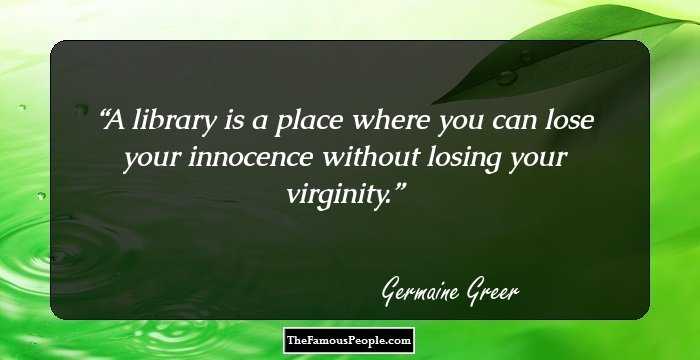 Quotes: You
Continue Reading Below
Career
In October 1970, her book ‘The Female Eunuch’ was published in London. It is one of her bestselling works and has sold many copies across the world.
In 1972, she co-anchored the comedy TV show, ‘Nice Time’ and that year she also authored a column for ‘The Sunday Times’ and travelled to Bangladesh to observe the situation of women who were raped during the conflict with Pakistan.
In the mid-1970s she was seen on the American public affairs show ‘Firing Line’, which was hosted by conservative William F. Buckley, Jr., who appreciated her for the way she carried herself on the show.
In 1979, she was selected for the post of Director of the Center of the Study of Women's Literature, at the University of Tulsa, Oklahoma.
In 1979, her second book, ‘The Obstacle Race: The Fortunes of Women Painters and Their Work’ was published. The book covers the details of woman painters and their work until the 19th century.
From 1981 to 1982, she served as the founding editor of the journal, ‘Tulsa Studies in Women's Literature’, a University of Tulsa publication that was dedicated to the study of feminist literature and theory.
In 1984, her book titled ‘Sex and Destiny: The Politics of Human Fertility’ was published. The book was a critique of the Western attitudes and their imposition of birth control on the Third World countries.
In 1986, she came out with the book ‘Shakespeare’, which was a work of literary criticism and the same year, her other book ‘The Madwoman's Underclothes: Essays and Occasional Writings’, was published.
Published in 1989, ‘Daddy, We Hardly Knew You’, written in a diary and travelogue format, was a work depicting her father and the relationship she shared with him, which she described as distant and cold.
Continue Reading Below
In 1991, her book, ‘The Change: Women, Ageing, and the Menopause’ was published. In the book, she addressed the various myths regarding menopause and the publication received positive reviews from The New York Times.
Published in 1995, ‘Slip-Shod Sibyls: Recognition, Rejection and the Woman Poet’ was a book on women poets in the 1900s and also enquired the fact why there were so few woman poets in that era.
In 1999, she came out with ‘The Whole Woman’, which was a sequel to her previously published book ‘The Female Eunuch’. In the book she explains the various forms of discrimination and exploitation which women undergo.
In 2003, her book ‘The Beautiful Boy’ also known as ‘The Boy’ was published. The same year, she came out with ‘Whitefella Jump Up: The Shortest Way to Nationhood’.
In 2007, she contributed an essay for the book ‘Stella Vine: Paintings’ and in May of the same year, she participated in the public talk, titled ‘Gender & Culture’, which was a part of the Women's International Arts Festival.
In 2007, she published the book titled ‘Shakespeare's Wife’, a biographical account on the life of Ann Hathaway, the wife of William Shakespeare. In the book, she also delves on the concept of female independence.
In 2008, she authored an essay titled ‘On Rage’, which was published by the Melbourne University Publishing, in the series titled ‘Little Books on Big Themes’.
In 2011, she played herself in the British mockumentary comedy series, ‘Come Fly with Me,’ directed by Paul King. The show was created by Matt Lucas and David Walliams. 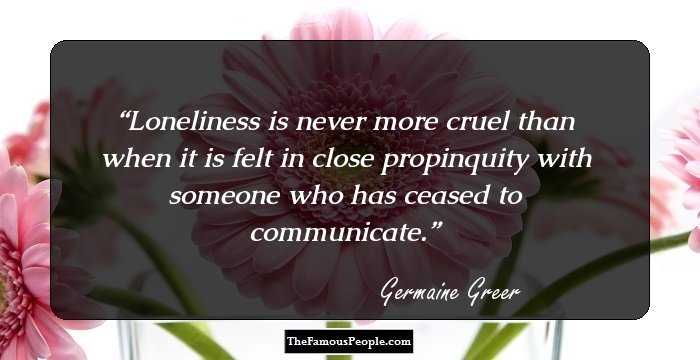 Quotes: Never
Major Works
One of her seminal works, ‘The Female Eunuch’ was an international bestseller which has been translated in eleven in languages. It is considered an important book on feminism and woman’s sexuality.
Personal Life & Legacy
In 1968, she married Paul du Feu, a British remodeler and carpenter. They separated after three weeks, as he cheated on her and they finally divorced in 1973. 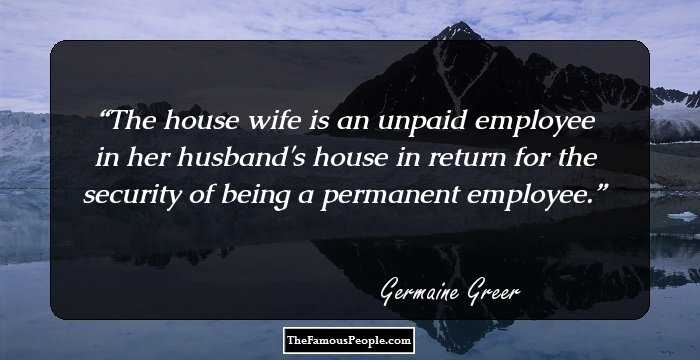 Trivia
This acclaimed Australian feminist author was arrested in New Zealand in 1972 for use of bad language while giving a speech.

Quotes By Germaine Greer | Quote Of The Day | Top 100 Quotes

See the events in life of Germaine Greer in Chronological Order 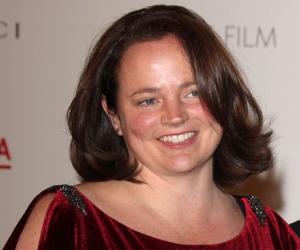