(Consultant in Poetry to the Library of Congress from 1976 to 1978, a role today known as US Poet Laureate.)

Robert Hayden was an American poet and essayist, who wrote mostly about the African-American community and the experiences they had to go through. Although he himself was an African-American, he never wanted to be categorized as a “black poet”. Instead, he wanted his works be judged by all the critical and historical standards, by which any other English-language poetry is judged, a stance that made him unpopular among Black poets. Born and raised in poverty in a ghetto, suffering from extreme myopia since his childhood, he had a traumatic childhood. Yet, he managed to rise above all to start writing poetry in his elementary school, eventually publishing his first collection at the age of twenty-seven and becoming the first Black member of the English Department of the University of Michigan at the age of thirty-one. However, it was not until he published his Selected Works (originally Ballad of Remembrance) that he became truly famous. Art Garfunkel
4th August In History
DID WE MISS SOMEONE?
CLICK HERE AND TELL US
WE'LL MAKE SURE
THEY'RE HERE A.S.A.P
Quick Facts

Robert Hayden was born on August 4, 1913, as Asa Bundy Sheffey in the Paradise Valley neighborhood of Detroit, USA. Predominantly resided by African-American, Chinese and Italian communities, the area was plagued with urban poverty.

While his father, Asa Shelby, was a former coal miner of African-American descent, his mother, Ruth Shelby, was of mixed origins. Separated from his wife before the birth of their son, Asa Shelby did not play any role in his upbringing.

When he was eighteen months old, his mother too left him with their equally poor neighbors, Sue Ellen Westerfield and William Hayden, to go to Buffalo in search of better prospect. Although they never officially adopted him, his foster family raised him to the best of their ability.

Life in Paradise Valley with his poor and bickering foster parents was not easy. Added to his woes was his extreme myopia, which did not allow him to play outdoor games. That his biological mother often returned to lay claim on him made his life even more disconcerting.

Although his foster parents often quarreled among themselves, they took keen interest in his well-being. While William Hayden was a violent discipliner, Sue Ellen told him African American folktales and stories about Reconstruction-era racial violence, recounting her own experiences as a maid on Ohio River steamships.

She also made sure that he attended classes for partially sighted, where he learned to read by holding his books six inches away from his eyes. Sometime now, he also learned to play violin; but had to give that up and drop out of the Sunday school orchestra because of his reading difficulties.

Feeling isolated, he now turned to reading and writing, starting to scribble poems and stories in his elementary school. However, his foster father, who was also a former miner, did not appreciate his son’s aptitude and took his aversion to outdoor games as a lack of manliness.

The books not only helped him to escape his environment, but they also provided him with a glimpse into an unknown world. By the time he was in high school, he made up his mind to become a poet.

In 1932, Robert Hayden graduated from high school and entered Detroit City College on a scholarship, with Spanish as his major. However, the ongoing Great Depression made it impossible for him to continue his studies, forcing him to leave the college in 1936, one credit short of finishing his degree.

In 1941, he resumed his education, enrolling at the University of Michigan with English as his major and studying under W.H. Auden, he earned his MA degree in 1944. During this period, he began reading works by Hart Crane, Marianne Moore, and Gerard Manley Hopkins. 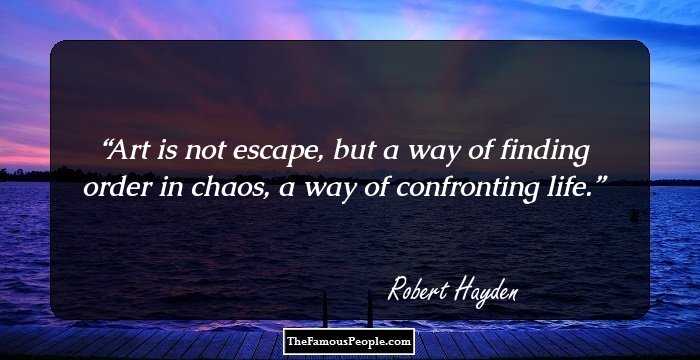 In 1836, on abandoning his education, Robert Hayden began his career as a researcher at the Federal Writers’ Project, working on the history of the Underground Railroad in Michigan and Black folklore, receiving a meager salary for his toil. Therefore, to supplement his income, he also joined Michigan Chronicle as a critic.

All along, he continued to write poems, publishing his first collection, Heart Shape in the Dust, in 1940. Although it failed to attract much attention, he did not give up.

In 1941, while on a visit to New York, he had the opportunity to meet one of his favorite poets, Countee Cullen, and was thrilled to discover that Cullen had not only read Heart Shape in Dust, but also liked it. Inspired, he now decided to pursue his literary ambition more seriously.

In 1941, Hayden entered University of Michigan with playwrighting, poetry, and literature. One of his professors there was British poet, W.H. Auden, who would leave a strong impact on him. All along, he continued writing poems, twice winning the prestigious Jules and Avery Hopwood Award for his works.

In 1944, on earning his MA degree, Hayden joined the University of Michigan as a teaching fellow. With that, he became the first Black member of the English Department.

Continuing to write, he co-published another book of poem, The Lion and the Archer, with ‎Myron O'Higgins in 1946. Also in the same year (1946)3, he published two of his well-known poems, Middle Passage In Cross Section, an annual poetry anthology and Frederick Douglass in Atlantic Monthly magazine.

In 1946, he left University of Michigan to join the Fisk University, a historically Black university located in Nashville, Tennessee, as an assistant professor, remaining with it for next twenty-three years. Initially he found it hard to adjust to the segregation policy of the south; but did not give up.

Life at Nashville was very hectic for Hayden, often being asked to take as many as five college courses per semester. As a result, he had little time to pursue his passion. He published a thin collection of poems, Figure of Time, in 1955.

Although Robert Hayden continued to write, his works did not initially attract much public attention. This changed when in 1962 he published A Ballad of Remembrance. Re-published in 1966 as Selected Poems, the work not only earned him his first major award, but also a place on international literary map.

By 1965, the Black Art Movement set off. However, Hayden refused to join it, declaring himself as an American poet, rather than a Black poet. Although the stance made him unpopular among many, he did not budge.

In 1970, he had Words in the Mourning Time published from London. It was followed in 1975 by Angle of Ascent: New and Selected Poems by Robert Hayden. Meanwhile he served as the visiting poet at various universities; namely, University of Connecticut (1971), Dennison University (1972), andConnecticut College (1974).

In 1980, he published his last work, American Journal: Poems by Robert Hayden. Two other works, The Collected Prose (1984) and Collected Poems (1985, reprinted, with a new introduction, 1996) were published posthumously.

Robert Hayden is possibly best remembered for his 1962 collection, A Ballad of Remembrance, which was republished in 1966 as Selected Poems. The poems in this collection showcase not only his narrative ease, but also his capability for developing compelling characters.

Among the poems included in this collection, Those Winter Sundays, written in 1962 and Middle Passage, written in 1945 and revised in 1962, are most significant. While the former depicts the tender relationship between father and son, the latter centers on the Atlantic slave trade that ruined the lives of millions.

Robert Hayden had received numerous awards, the first among them being Jules and Avery Hopwood Poetry Award (1942 and 1944) from University of Michigan.

In 1966, he received the World Festival of Negro Arts grand prize for A Ballad of Remembrance. It was followed in 1970 by Russell Loines Award, and in 1977 by Michigan Arts Foundation Award.

In 1975, he received the Academy of American Poets Fellowship.

In 1976, he became the first African-American to be appointed as consultant in poetry to the Library of Congress, a post later renamed as the Poet Laureate.

In 1940, Robert Hayden married Erma Inez Morris, a pianist and composer. She later served as supervisor of music for Nashville public schools. They had at least one daughter named Maia.

Raised as a Baptist, he followed his wife into the Baháʼí Faith while studying at the University of Michigan. Eventually he became one of the best-known Baháʼí poets.

As the 1970s progressed, his health began to fail. He died of heart failure in the University of Michigan’s hospital on February 25, 1980.

See the events in life of Robert Hayden in Chronological Order