Ralph Steadman is an English cartoonist, illustrator and author. His love for drawing and cartoons ignited in him when he first joined an advertising agency early on in his life. He made it a point to learn the art from many different British institutes like Percy V. Bradshaw’s correspondence course, East Ham Technical College and School of Printing and Graphic Arts. Steadman contributed his political, dark-humored and satirical cartoons to publications in England and America for many years, like, Kemsley Newspaper Group, Daily Mail, New York Times, etc. His work with the American journalist Hunter S. Thompson is considered to be the most popular work of his career which includes, ‘Fear and Loathing in Las Vegas’, Fear and Loathing on the Campaign Trail '72’, ‘Kentucky Derby’ for Scanlan, etc. His cartoons were considered to be subversive and dark because of his straightforward take on the politics and political figures but by the early 1980s he started to lose interest in political cartooning as he felt that there was not much substance left in the world politics. He turned to creating his own illustrations books and released many masterpieces like, ‘Alice in Wonderland’, ‘I Leonard’, ‘Doodaa’, etc. He has been honored with prestigious awards like, American Society of Illustrators' Certificate of Merit, the W H Smith Illustration Award, BBC Design Award, etc. Jeff Kinney
Cartoonists #60
Media Personalities #1693
DID WE MISS SOMEONE?
CLICK HERE AND TELL US
WE'LL MAKE SURE
THEY'RE HERE A.S.A.P
Quick Facts

American People
Male Cartoonists
American Cartoonists
Male Media Personalities
American Media Personalities
Childhood & Early Life
Ralph Steadman was born in Wallasey, Cheshire, in a lower-middle class background to Lionel Raphael Steadman, who was a commercial traveler selling women’s clothing. His mother was a shop assistant.
Steadman attended the Abergele Grammar School but by the time he turned 16, he left the school as he could not take the excessive authority enforced on him by his headmaster. He joined De Havilland, an aircraft company.
In a matter of few months, Steadman started getting tired of the factory life so he joined Woolworth’s as a trainee manager. In 1954, McConnell’s Advertising Agency in Colwyn Bay hired him. 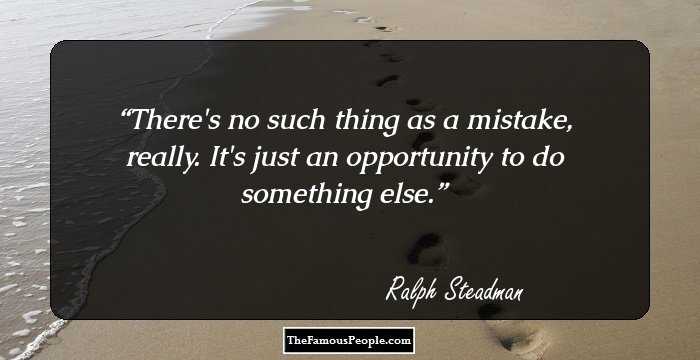 The Sexiest Men Of 2020, Ranked
Career
From 1954-56, Steadman spent time in National Service in RAF in Britain and alongside continued to take Percy V. Bradshaw’s correspondence course in cartooning as by now his interest in illustration had grown. His parents paid for the course.
He started drawing from 1955 and sent his work to ‘Punch’ every week but his first cartoon was published in the Manchester Evening Chronicle in the following year. The cartoon was related to ‘Nasser and the Suez crisis’.
In 1959, Steadman joined the Kemsley Newspaper Group and worked there as a cartoonist. He contributed editorial cartoons there and a weekly panel about a fictitious teenage girl character named ‘Teeny’. 8During the same time he also studied art part-time from Leslie Richardson at East Ham Technical College. He used to start work at Kemsley at 10 o’clock and finish by 3 in the afternoon and then attended his college.
After getting sacked from Kemsley, Steadman started freelancing, contributed his cartoons to Punch, the Daily Sketch and the Daily Telegraph.
Steadman submitted a drawing to Private Eye entitled ‘Plastic People’, for which the head of the publication, sent him �5 and a note saying "More power to your elbow." It was published with a double page spread in the issue.
From 1961 to 1965, on Leslie Richardson's persuasion, he studied at London School of Printing and Graphic Arts. It was partly because he was not doing very well commercially and was overshadowed by his ex-friend and competitor Gerry Scarfe.
After finishing studies, Steadman was hired by Daily Mail and was offered rather a large sum of money and an E-type Jaguar in 1966. In the following year, he became the Artist-in-residence at the Sussex University.
In 1970, he worked for Rolling Stone for a while and then was hired by an American radical magazine Scanlan's Monthly. In the following year, Steadman did illustration for Hunter S. Thompson’s book, ‘Fear and Loathing in Las Vegas’.
Steadman came back to London by the end of 1970, to cover the General Election for The Times he was only the second political cartoonist the paper had ever employed.
Continue Reading Below
From 1976-80 Steadman drew political cartoons for the New Statesman. His style now changed and his drawings became more primeval. During this time, he worked for the National Theatre, and also contributed to publications like Rolling Stone, New York Times, etc.
Together Ralph and Bernard Stone created children’s books and crafted the classic Emergency Mouse (1978) and then Inspector Mouse (1980). Finally the triptic was completed with Quasimodo Mouse (1985).
In the 1980s Ralph was approached by the wine merchants, Oddbins, to produce their wine catalogues. He wrote and illustrated many books of his own like, ‘Sigmund Freud’, ‘The Big I Am about God’, ‘Doodaa’, etc.
Steadman wrote an oratoria for an Eco –opera with the composer, Richard Harvey in 1989—‘The Plague and the Moonflower’. It explores the pollution of the planet through the symbolic love story of the plague demon and the moonflower.
Ralph was approached by The Royal Opera House to design their new ballet based on Arthur Miller's ‘The Crucible’ in 1990. The costumes had oily inks pored, thrown and splattered over them by Steadman himself.
‘For No Good Reason’, a documentary on Steadman's career, was directed by Charlie Paul and was showcased for the first time at the 2013 Toronto International Film Festival. It took 15 years to make the movie. 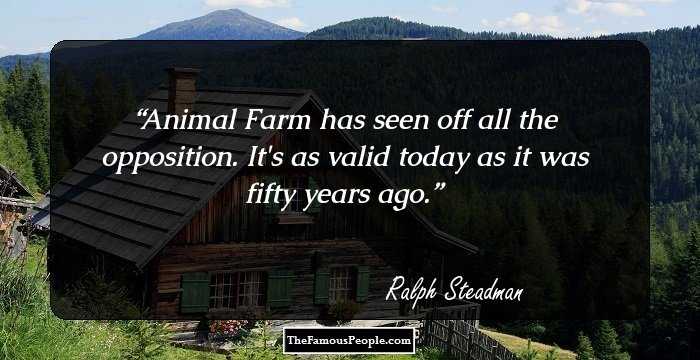 Major Works
Steadman’s work with the American journalist Hunter S. Thompson is considered to be his most popular work: ‘Fear and Loathing in Las Vegas’, Fear and Loathing on the Campaign Trail '72’, ‘Kentucky Derby’ for Scanlan and ‘Honolulu Marathon’ for Running.
Awards & Achievements
Steadman has been honored with awards like: Francis Williams Book Illustration Award, American Society of Illustrators' Certificate of Merit, the W H Smith Illustration Award, Dutch Silver Paintbrush Award, BBC Design Award, Black Humour Award in France, etc.
Personal Life & Legacy
Steadman lives with his wife in Kent, England, where he has his own vineyard in his garden.
Trivia
He contributed to the BirdLife International's Preventing Extinctions programme with an image of critically endangered Northern Bald Ibis.
You May Like

See the events in life of Ralph Steadman in Chronological Order