Pieter Cornelis Mondriaan, famously known as Piet Mondrian, was a Dutch painter who produced revolutionary artistic works in The Netherlands, France, England and United States, in the course of his lifetime. He is known to be a pioneer in the development of the modern abstract art - the form of art that was only just beginning to take its form while Mondrian was experimenting with different expressions. He was a chief proponent of the newly formed Dutch abstract art movement known as the De Stijl (The Style) art movement; the movement was founded by another great Dutch artist named Theo van Doesburg—Mondrian was highly influenced by him, while he was still searching the right spiritual expression for his artistic endeavors. In his paintings, he played with the simplest amalgamation of straight lines, right angles, primary colors, and black, white, and gray. The work produced as an effect of this possessed an intense ceremonial wholesomeness that exemplified his spiritual belief in a harmonious cosmos. A lot of work that Mondrian had left undone in Paris and London because he had to move to United States due to the threat of growing fascism in Europe, he finished it in Manhattan. 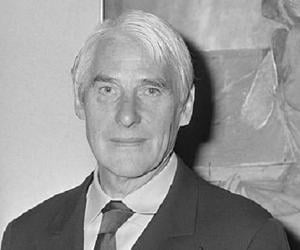 Roy Lichtenstein
DID WE MISS SOMEONE?
CLICK HERE AND TELL US
WE'LL MAKE SURE
THEY'RE HERE A.S.A.P
Quick Facts

Dutch Celebrities
Dutch Artists & Painters
Male Artists & Painters
Pisces Artists & Painters
Pisces Men
Childhood & Early Life
Mondrian was born in Amersfoort, Netherlands, to Pieter Cornelius Mondriaan. His father was a Head Teacher at a local school; he was also a qualified drawing teacher and was responsible in initiating his son into the world of art.
Mondrian attended the Academy for Fine Art, Amsterdam, in 1892 and later became a Primary Education teacher while practicing painting side by side. There are number of his paintings that are displayed in the Gemeente museum, Hauge, belonging to this period. 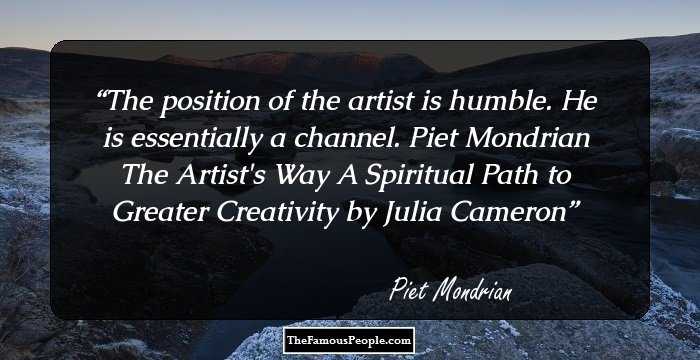 The Best Black Actresses Of All Time
Career
Mondrian got himself deeply involved in the theosophical movement in 1908, launched by Helena Petrovna Blavatsky and, in the following year, he joined the Dutch branch of the Theosophical Society. All of this influenced his paintings very much.
The Moderne Kunstkring exhibition of Cubism, Amsterdam in 1911 also made a deep impact on his paintings. His quest to find artistic simplification is clear with the two versions of his famous painting ‘Still Life with Ginger Pot’.
In 1911, he went to settle in Paris and also changed his name from ‘Mondriaan’ to ‘Mondrian’. During this time, his work also showed some influence of painters like, Picasso and Georges Braque.
Mondrian treated his art and paintings as his ultimate spiritual detections and in 1913, he increasingly started to merge his artistic pursuits and his theosophical studies into a theory, which symbolized his ultimate split from the representational painting.
In 1914, he visited The Netherlands but around this time the tension because of the impending World War I was brewing up, which forced him to stay. During this time he started a journal ‘De Stijl’ with Van Doesburg.
After publishing his essays in ‘De Stijl’, Mondrian published ‘De Nieuwe Beelding in de schilderkunst’ during 1917 and 1918. Through this book he tried to communicate his artistic theory, influences and justifications in writing rather than in painting.
After the war ended, he went back to France and it was here that he realized his love towards abstraction in art. From 1919, he started making grid-based paintings—a style that he still remains very renowned for.
In between 1920-1921, his painting style transformed and started taking a mature form. His paintings now had thick black lines delineating and separating the forms, which were larger and fewer in number.
During the 1920s, Mondrian started to produce the ‘lozenge’ works and his tendency to include abstract art in his painting technique is visible in these works. Lozenge paintings are square canvases tilted 45 degrees--hanging in a diamond shape.
Continue Reading Below
‘Schilderij No. 1: Lozenge With Two Lines and Blue (1926)’ (also known as Composition With Blue and Composition in White and Blue), is currently on display at the Philadelphia Museum of Art—is the most minimalistic of his watercolors.
Because of growing fascism in Paris, Mondrian left for London in 1938 and after The Netherlands’ invasion, he moved to Manhattan, United States. A lot of work that he began in Paris and London, he finally finished in Manhattan.
He produced works in Manhattan, like: ‘Lozenge Composition With Four Yellow Lines (1933)’, a simple painting that portrayed something that Mondrian did not ever experiment with before - thick, colored lines instead of black ones.
His art took a new direction in Manhattan - his ‘Composition (1938)’ and ‘Place de la Concorde (1943)’ portrays how he took fragmentary black-line paintings from Paris and finished them in Manhattan by introducing lines of different colors.
Major Works
Mondrian evolved in his artistry over the years; he started with representational paintings but influenced with the De Stijl movement, he evolved into a non-representational painter—a form of art that he named neoplasticism and majorly contributed to it.
Personal Life & Legacy
Mondrian died in New York in 1944 because of pneumonia. He was buried in Cypress Hills Cemetery in Brooklyn.
Trivia
His memorial service was attended by artists like: Alexander Archipenko, Marc Chagall, Marcel Duchamp, Fernand L�ger, etc.
At the age of 71, Mondrian moved into his second and final Manhattan studio at 15 East 59th Street—according to him it was the best space he had ever acquired for a studio.
His friends, artist Harry Holtzman, and another painter friend, Fritz Glarner, documented the studio on video and photographs before the studio was made available for a six-week exhibition.
In 2008, the Dutch television program ‘Andere Tijden’ telecast the only known movie footage with Mondrian.
You May Like

See the events in life of Piet Mondrian in Chronological Order