Paul Klee was a Swiss-German painter who though originally associated with the German Expressionist group ‘Der Blaue Reite’, refused to adhere to any single artistic movement over the span of his career. He was also a gifted draughtsman and an educator whose lectures on color theory hold an important place in modern art. He taught at the German Bauhaus school of art, design and architecture, and his unique style was influenced by several art movements including expressionism, cubism, and surrealism. A highly creative and independent minded person, he challenged the traditional norms of expression in art and writing and explored abstract and poetic ideas in his paintings and writings. He was a transcendentalist who believed that the material world was only one among many realities open to human awareness. He was also a musician who used to practice on his violin before he started painting; as an artist, he could feel the analogies between music and the visual arts. He experimented freely with artistic techniques and applied paint in ways unusual for his era, and he greatly admired the unrestrained, free-flowing art of children. He suffered from a wasting disease towards the end of his life, the pain of which was reflected in his later paintings. A highly prolific artist, he left behind a legacy comprising about 9,000 works of art at the time of his death. Albert Anker
DID WE MISS SOMEONE?
CLICK HERE AND TELL US
WE'LL MAKE SURE
THEY'RE HERE A.S.A.P
Quick Facts

Cause of Death: Systemic Scleroderma

German Celebrities
Swiss Celebrities
Surrealist Artists
German Men
Swiss Men
Swiss Artists & Painters
Childhood & Early Life
He was born on 18 December 1879 as the second child of German music teacher Hans Wilhelm Klee and his Swiss wife, Ida Marie Klee. He had one elder sister.
From a young age he was encouraged by his parents to learn music. He was sent to attend violin classes at the Municipal Music School when he was seven. He was musically talented and was invited to play as an extraordinary member of the Bern Music Association when he was just 11.
But eventually his interests turned towards art and he began studying art at the Academy of Fine Arts in Munich with Heinrich Knirr and Franz von Stuck in 1898. He drew well but seemed to lack a natural color sense.
He traveled to Italy with a friend after receiving his Fine Arts degree and spent a few months in 1901–02 studying the master painters of past centuries. He returned home and took occasional art classes. 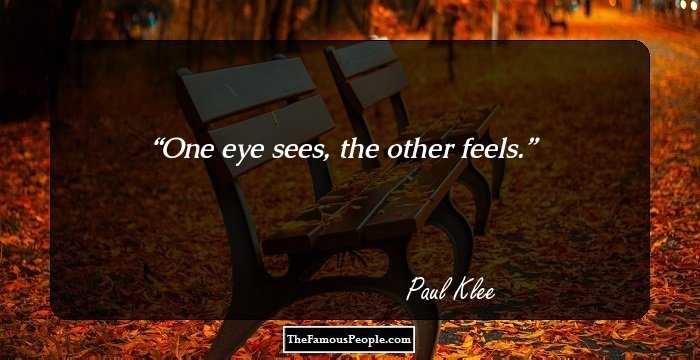 Quotes: Art
Continue Reading Below
Career
He started developing some experimental techniques during the 1900s, including etching and drawing with a needle on a blackened pane of glass. From 1903 to 1905 he worked on a series of etchings called ‘Inventions’ in which he illustrated several grotesque characters. During this time he was also playing violin in an orchestra and writing concert reviews.
He met Alfred Kubin in 1911 and Kubin encouraged him to illustrate Voltaire’s ‘Candide’. Kubin was very supportive of the young artist and appreciated his inclination towards the absurd and the sarcastic.
Through Kubin, Klee met many other artists and art critics, and by the winter of 1911 he joined the editorial team of the journal ‘Der Blaue Reiter’ which was co-founded by Franz Marc and Wassily Kandinsky. This period saw Klee experimenting with colors in landscapes.
His work reached a new level of maturity during the World War I. Several of his friends including Auguste Macke and Franz Marc were killed and this deeply affected Klee. He made many pen-and-ink lithographs, including ‘Death for the Idea’, in response to these losses.
He joined the German army in 1916, restoring aircraft camouflage and working as a clerk. He also continued to paint during the entire war and also managed to exhibit in several shows. He became very popular by 1917 and was hailed as the best of the new German artists.
In 1919 he secured a three-year contract with dealer Hans Goltz, whose influential gallery gave Klee major exposure as well as commercial success. He also held a retrospective of over 300 works in 1920.
In 1920, Walter Gropius invited Klee to join the faculty of the Bauhaus, a school of architecture and industrial design. He accepted this post and started teaching in January 1921. His friend Kandinsky joined the staff the next year, and the two men formed the Blue Four with two other artists, Alexej von Jawlensky and Lyonel Feininger, and toured the United States to lecture and exhibit work.
Klee began teaching at Dusseldorf Academy in 1931. However, he was fired under Nazi rule in 1933 and moved with his family to Switzerland. He was at the peak of his career at this time. He soon started suffered from ill health and his output dropped considerably even though he continued painting until his last years. 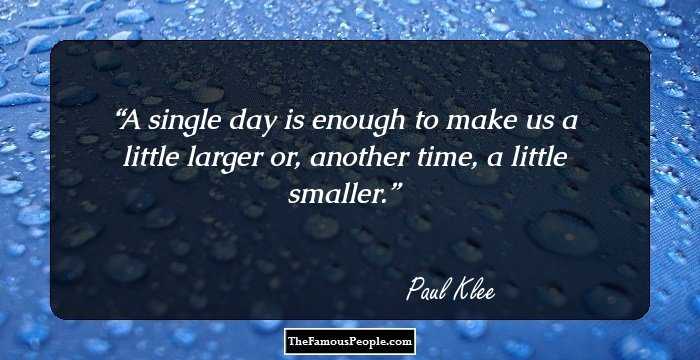 Quotes: Time
Personal Life & Legacy
During his youth he developed the habit of frequenting pubs. As a young man he also became involved in numerous affairs with lower class women and artists’ models. One of his several liaisons resulted in the birth of a son in 1900 though the baby died after a few weeks.
In 1906, he married Bavarian pianist Lily Stumpf and they had one son, Felix Paul. His wife gave piano lessons while he kept house and focused on his art.
He suffered from a wasting disease, scleroderma, during his later years and was constantly in pain. His unbearable pain is reflected in one of his last paintings, ‘Death and Fire’ which depicts a skull with the German word for death, “Tod”.
He died on 29 June 1940 in Muralto, Locarno, Switzerland.

See the events in life of Paul Klee in Chronological Order 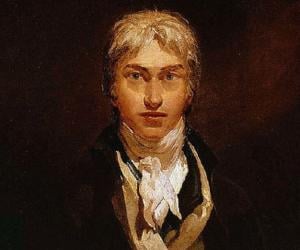