Darren Le Gallo is an American artist and actor, who is more famous for being married to actress Amy Adams. Although most of the media interest in Darren is generated from his relationship with Amy Adams, he is a very talented artist in his own right. He has worked behind the scenes on major blockbusters like ‘The Matrix Reloaded’ and ‘Imposter’. In addition to that, Le Gallo has also acted both on TV and movies like ‘Six Feet Under’, ‘Pennies’, ‘Date Night’, and ‘Then We Got Help’. Although he has received praise for his performances, creatively he has gained more fame through his artwork. Darren Le Gallo’s art is described as a bridge between surrealism and expressionism. The talented artist also enjoys a massive following on social media where he often updates people on his latest artwork or projects. Simultaneously, the creativity inside him has also ventured into music, which he often shares on SoundCloud. 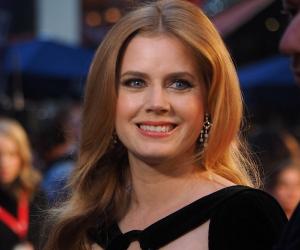 Arón Piper
Actors #11489
Artists #2177
Artists & Painters #3192
Continue Reading Below
21st July In History
DID WE MISS SOMEONE?
CLICK HERE AND TELL US
WE'LL MAKE SURE
THEY'RE HERE A.S.A.P
Quick Facts

German People
German Men
Tall Celebrities
Tall Male Celebrities
Cancer Actors
Career & Fame
Like any other struggling actor, Darren Le Gallo started his acting career by taking acting classes and auditioning for roles. Even though he had a degree in Art, he always had a passion for acting and music and this led him to the entertainment industry. While taking acting classes in 2001, he met Amy Adams, who was also an upcoming actress then. In 2001, Le Gallo got his first on-screen break in the TV series ‘Six Feet Under’ where he portrayed a teenage boy in the episodes ‘Knock Knock’ and ‘The Feet’. His second outing was a small role in the episode ‘Showdown’ in the series ‘First Monday’.
2005 turned out to be a milestone year for Darren personally after he starred opposite Amy Adams in the short ‘Pennies’. There was instant chemistry between the two. He asked her out on a date as both of them were single at that time and this was the beginning of their beautiful relationship.
In 2007, Darren was seen in the short ‘The Big Bang Theory’, based on the aftermath of the horrific ‘September 11’ attacks on the USA. He received critical acclaim for his performance. The same year was the breakthrough year for Amy Adams with the critical and commercial blockbuster, ‘Enchanted’, earning her a ‘Golden Globe Award’. Instantaneous fame followed the success and much attention was also drawn towards Darren as her partner.
In 2008, Darren got engaged to Amy and on December 2009, the couple announced they were pregnant. Their daughter was born in 2010, and he became a dedicated father to the child. Although never enjoying the same commercial success as Amy, Darren was enjoying both domestic bliss and career high. He starred in the movie ‘Date Night’ alongside Tina Fey and Steve Carrel in April 2010. The year turned out to be even more successful for his acting career, with roles in the TV series ‘Living in Your Car’, the video ‘Love & Distrust’, and the short ‘It Goes’.
In 2011, he got his first major role on the show ‘Then We Got Help’. The next year, Darren appeared in a handful of roles in ‘Broken Kingdom’, ‘The Master’, and ‘Lullaby’. In 2014, he was seen in the movie ‘#Stuck’ and followed that up with ‘Cindy’s New Boyfriend’ (2015). In spite of all this what really brought him more fame in 2015, was his marriage to Amy Adams.
Darren later started focusing on his art, which brought him more fame and success. With themes centering on the exploration of the human psyche, the subconscious mind, and the blend of surrealism and expressionism, Darren Le Gallo’s art has been defined as “the most intriguing contemporary art”. They have been featured in renowned galleries like New York's ‘Bold Hype Gallery’, California’s ‘Trig Ison Fine Art’, and Seattle’s ‘Washington's Ltd. Art Gallery’.
You May Like

German Actors
German Artists
Actors Who Are In Their 40s
German Artists & Painters
Continue Reading Below
Personal Life
Darren Le Gallo was born on July 21, 1974, in Landstuhl, Germany. He later moved to the USA and completed a BA in Painting from Abilene Christian University, Texas, in 1996. In 2001, he took acting classes where he met actress Amy Adams. They were in different relationships, but none of those worked out. After starring opposite each other in ‘Pennies’, Darren asked Amy out in 2006, who found him genuine and assertive. The connection was spontaneous and they got engaged in 2008. On December 5, 2009, the couple released a statement saying that they were expecting their first child. On May 15, 2010, Amy Adams gave birth to their daughter Aviana Olea Le Gallo. After a seven-year engagement, Darren Le Gallo and Amy Adams got married on May 2, 2015, and have been living happily together.
Recommended Lists: