Advanced Search
Paul Adrien Maurice Dirac was an English theoretical physicist and one of the pioneers in quantum mechanics and quantum electrodynamics. He had an unhappy childhood, and in spite of possessing the ability to speak French, German and Russian, he was known for his long silences. He was particularly interested in mathematics and after hearing of Einstein, he got into advanced physics and visited Niels Bohr for research work. Soon he earned the admiration, respect and friendship of geniuses including Bohr, Heisenberg, and Gamow. Evidence of his proficiency comes from the fact that he proposed anti-matter only on the basis of his mathematical logic telling him that it must exist. He worked through the rise of the Nazi party in Europe, the repressions of Stalinist Russia, the World War II, the McCarthy era and the Cold War. A brilliant physicist who made invaluable contributions to science, he was an unusual man on the personal front. He was known for his taciturn nature and was outspoken in his criticism of others. The winner of several prestigious awards including the 1933 Nobel Prize for physics which he shared with Erwin Schrödinger, he had turned down a knighthood as he did not want to be addressed by his first name. C. F. Powell
DID WE MISS SOMEONE?
CLICK HERE AND TELL US
WE'LL MAKE SURE
THEY'RE HERE A.S.A.P
Quick Facts

British Celebrities
British Men
University Of Bristol
University Of Cambridge
Leo Scientists
Childhood & Early Life
Paul Dirac was born on August 8, 1902 in Bristol, England. His father, Charles Dirac, was a French teacher and his mother, Florence Hannah Dirac, worked in a library.
He had an elder brother, Reginald Felix, and a younger sister, Beatrice Marguerite. Their father was a strict disciplinarian and imposed the use of French language in the house.
After completing his school education in 1918 he studied electrical engineering at the University of Bristol on a scholarship and completed his degree in 1921. Even his first-class honours degree could not get him a job in those post World War I recession times.
He cleared the entrance examination for St John's College, Cambridge University and received a £70 scholarship. But as the overall costs of living and studying in Cambridge exceeded his budget, he gave up this opportunity.
The University of Bristol offered him a B.A. in Mathematics with no tuition fees, which he accepted. After graduating in 1923 with first class honours, he received a £140 scholarship from the Department of Scientific and Industrial Research.
Now equipped with enough finance, he went to Cambridge. For the next three years he worked under the supervision of Ralph Fowler and received a PhD in 1926. He continued his research in Copenhagen with Niels Bohr and became a fellow of St. John's College in 1927.
While going through Heisenberg's paper, Dirac noticed an analogy between the Poisson brackets of classical mechanics and Heisenberg's matrix formulation of quantum mechanics. He laid down these ideas in his doctoral thesis. 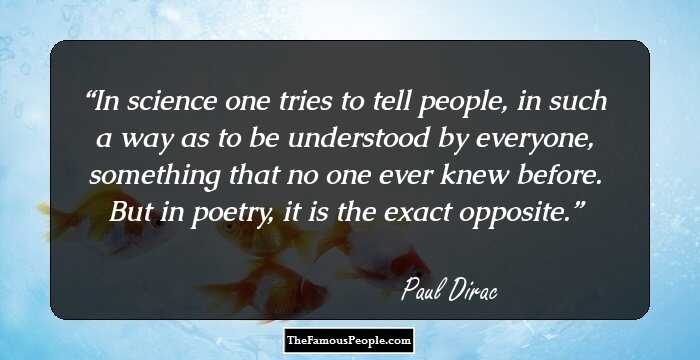 Continue Reading Below
Career
In 1928, he postulated a relativistic equation of motion for the wave function of the electron which established a connection between relativity and quantum mechanics. This became his famous ‘Dirac Equation'.
The formulation of the equation led to another scientific revelation—the prediction of existence of positron (anti-particle to electron), in a theoretical model of the vacuum known as the 'Dirac Sea'.
His book 'Principles of Quantum Mechanics' published in 1930 consolidated the works on matrix mechanics and wave mechanics into a single mathematical formalism.
The book introduced the delta function and in the third edition (1939), he included the bra-ket notation which enabled it to be used universally.
Dirac was the Lucasian Professor of Mathematics at Cambridge from 1932 to 1969. During the World War II he directed the theoretical and experimental research on
In the 1950s, he found a way of putting the Tomonaga-Schwinger equation into the Schrodinger representation, while also giving explicit expressions for the scalar meson field, the vector meson field and the electromagnetic field.
He derived the anomalous magnetic moment "Schwinger term" and the Lamb shift using the Heisenberg picture, in 1963.
His 1964 publication 'Lectures on Quantum Mechanics' dealt with the constrained dynamics of nonlinear dynamical systems and he published a paper titled 'Quantization of the Gravitational Field' to the 1967 ICTP/IAEA Trieste Symposium.
In 1975, he gave a series of five lectures at the University of New South Wales, which were later published as a book titled 'Directions in Physics' in 1978. The royalties from the book were donated to the university, for the establishment of the Dirac Lecture Series.
Continue Reading Below 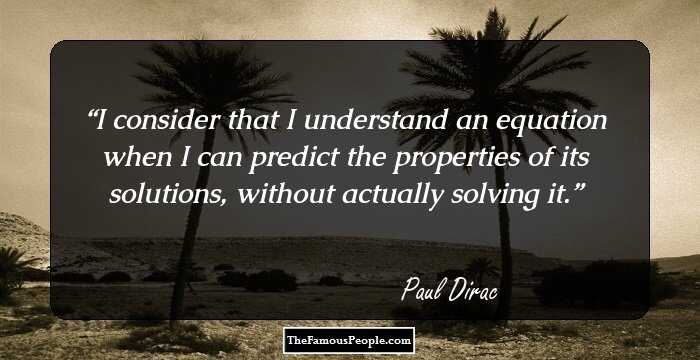 Major Works
While working for his doctorate in the 1920s, he became one of early pioneers in quantum mechanics by submitting the first ever thesis on quantum mechanics to be submitted anywhere, and later he founded quantum electrodynamics.
In 1928 he derived the 'Spin-1/2 Dirac Equation' equation which predicted the existence of ‘antiparticles’, particles with the same mass as particles of ordinary matter but the opposite electric charge. He became the 'discoverer' of antimatter.
Awards & Achievements
Dirac and Erwin Schrodinger shared the 1933 Nobel Prize for Physics, a recognition "for the discovery of new productive forms of atomic theory'.
He received the Royal Medal in 1939. More praise and recognition came with the Copley Medal and the Max Planck Medal in 1952, and the inaugural J Robert Oppenheimer Memorial Prize in 1969.
He received honorary fellowships from the American Physical Society (1948) and the Institute of Physics, London (1971). 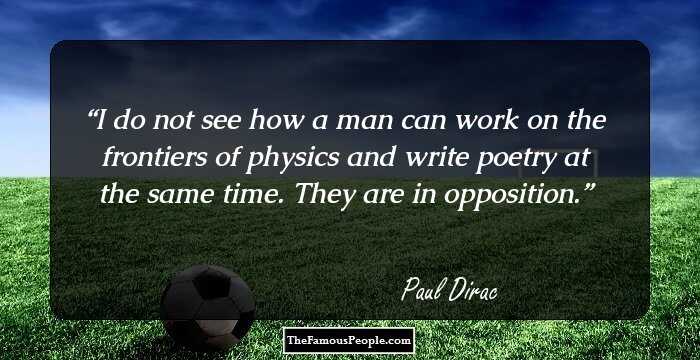 Personal Life & Legacy
Dirac married Margit Wigner in 1937. He adopted Margit's two children, Judith and Gabriel, from an earlier marriage. Together, they had two more daughters, Mary and Florence. Margit proved to be an excellent housewife and let Dirac attend to his research work as per his needs.
Paul Dirac died October 20, 1984 and was laid to rest at the Tallahassee's Roselawn Cemetery.
The University of New South Wales awards the 'Silver Dirac Medal', the Florida State University awards the 'Dirac-Hellman Award' and the Institute of Physics awards the 'Paul Dirac Medal' in Dirac's honour.

See the events in life of Paul Dirac in Chronological Order