(Former Associate Justice of the US Supreme Court)
Advanced Search

Oliver Wendell Holmes Jr. was a prominent American jurist who is among the most cited US Supreme court justices. He was a legal historian and philosopher who encouraged judicial restraint. He advocated the concept of “clear and present danger” as the basis for limiting free speech. Also known as ‘The Great Dissenter,’ he served as an ‘Associate Justice of the U.S. Supreme Court’ from 1902 to 1932, and ‘Acting Chief Justice of the United States’ from January to February 1930. He had also served as an ‘Associate Justice’ and as ‘Chief Justice of the Massachusetts Supreme Judicial Court’ and worked as ‘Weld Professor of Law’ at ‘Harvard Law School,’ his alma mater. He is known for his long service, sharp opinions and high regard for the decisions of elected legislatures. He is considered one of the most influential American common law jurists and was honoured both in the Great Britain and the United States during his lifetime. When he retired at the age of ninety after serving in the court for thirty years, he became the oldest judge in the Supreme Court’s history. Using his experience of fighting in the ‘American Civil War,’ Holmes steered the American legal thinking toward legal realism, which he summarized as ‘The life of the law has not been logic; it has been experience.’
Continue Reading Below American Celebrities
Lawyers
Chief Justices
American Men
Male Lawyers
Childhood & Early Life
Oliver Wendell Holmes Jr. was born on March 8, 1841, and was the first child of the celebrated writer and physician Oliver Wendell Holmes Sr. and abolitionist Amelia Lee Jackson. While Dr. Holmes was a prominent personality in Boston literary and intellectual circles, his wife was well-connected to some of the leading families. Eminent personalities such as Henry James Sr., Ralph Waldo Emerson and other transcendentalists were their close friends.
As a young kid, he was known as ‘Wendell’ and became good friends with Henry James Jr., a friendship that lasted a lifetime. He went to a private school and then attended Harvard College in 1857.
Since he was born and raised in an intellectual environment, he developed an ambition to become a man of letters like Ralph Waldo Emerson. When he was at Harvard, he wrote essays on philosophy and often asked Emerson to read out his attack on Plato’s idealist philosophy loud.
Like his mother, he also supported the ‘Abolitionist movement’ that had gained momentum in Boston during the 1850s. He became a member of the ‘Hasty Pudding’ and the ‘Porcelain Club’ at Harvard. His father had also been a member of both the clubs and just like his father, he too served as secretary and poet in the ‘Hasty Pudding club.’
At the beginning of the ‘American Civil War,’ he was in his senior year and in the spring of 1861 enlisted in the Massachusetts militia, but soon returned to college to participate in commencement activities. In the summer, he earned a first lieutenant's commission in the ‘Twentieth Massachusetts Volunteer Infantry’ with his father’s help. 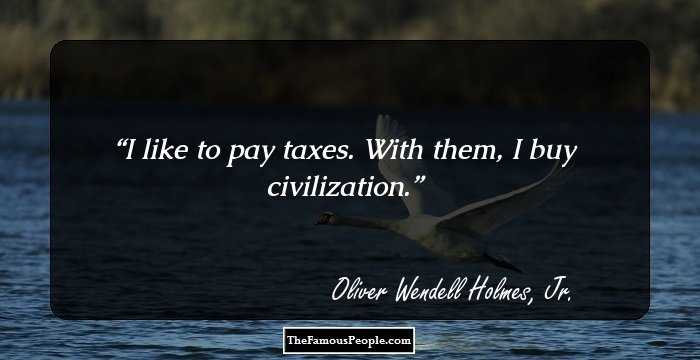 Who Is The Greatest Female Warrior In History?
Career
During his stint as first lieutenant, he took part in the ‘Peninsula Campaign,’ ‘the Battle of Fredricksburg’ and the ‘Wilderness.’ He also suffered injury at the ‘Battle of Ball’s Bluff,’ the ‘Battle of Antietam,’ and the ‘Battle of Chancellorsville.’
He rose to the rank of lieutenant colonel but avoided this promotion and served on the staff of the ‘VI Corps’ during the ‘Wilderness campaign.’
During the war, he received an honorary promotion as colonel. After his three-year enlistment ended in 1864, he retired and his regiment was disbanded. In the same year, he started writing poetry and debated on philosophical topics with his friend William James. By the fall, he enrolled at ‘Harvard Law School’ and attended lectures for a year. For the second year, he worked as a clerk in his cousin Robert Morse’s office.
In 1866, he completed his law degree from Harvard law school and was admitted to the bar. He went to London to finish his studies and started his law practice in Boston, joining a small law firm.
He practiced admiralty and commercial law for fifteen years. It was during this time in Boston that he worked on his most important scholarly work. He served as an editor of the new ‘American Law Review’ and reported on State Supreme Courts’ decisions. He also prepared a new edition of Kent’s ‘Commentaries,’ which was a compendium of case law to suit the needs of law practitioners. He diligently worked on summarizing his understanding of the law in a series of lectures which were collected and published as ‘The Common Law’ in 1881.
He became a professor at ‘Harvard Law School’ in 1882 and became ‘Chief Justice of the Massachusetts Supreme Judicial Court’ in 1899.
On August 11, 1902, Holmes was nominated by President Theodore Roosevelt to a seat on the United States Supreme Court. But after some delay, Roosevelt resubmitted the nomination on December 2, 1902, and Holmes was unanimously confirmed by the United States Senate on December 4, when he received his commission the same day. He also briefly served as the Chief Justice and presided over court sessions. 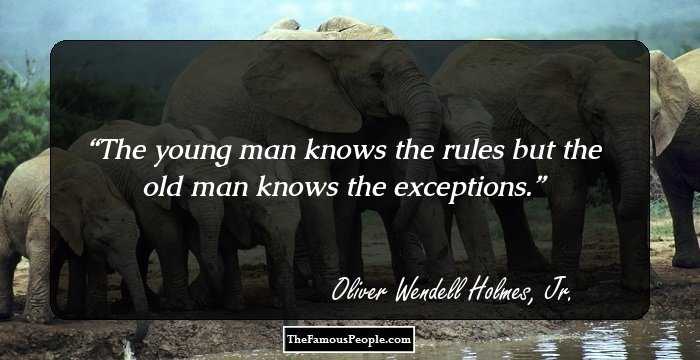 Quotes: Young
Major Works
During his law career, Holmes became famous for some of his most noteworthy rulings. Some of these included ‘Otis v. Parker,’ ‘Schenck v. United States,’ ‘Abrams v. United States,’ ‘Silverthorne Lumber Co. v. United States,’ and ‘Buck v. Bell.’
He also published an address, ‘The Path of the Law,’ in which he discussed his view of the law from the perspective of a practitioner concerned for his client’s interests, whose behaviour was far removed from moral principles.
Awards & Achievements
He was so admired during his last years that on his ninetieth birthday, he was felicitated on one of the first coast-to-coast radio shows, during which the Chief Justice, the Dean of Yale Law School, and the president of the American Bar Association read encomia. The Bar Association also awarded him with a gold medal.
The United States Postal Service honoured his legacy with a Prominent Americans series (1965–1978) 15¢ postage stamp. 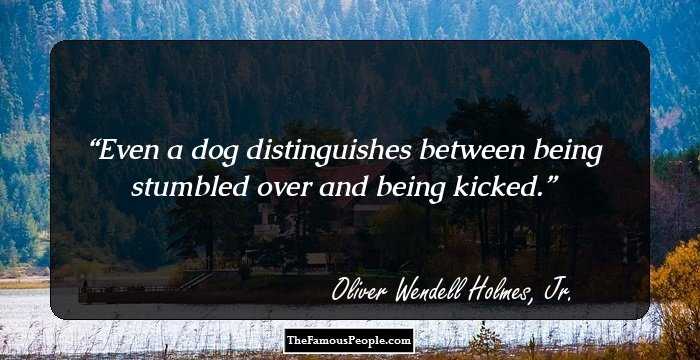 Personal Life & Legacy
During the time he worked in Boston, he frequently visited London and developed romantic relationships with several English women of the nobility. The most important of these relationships was with the Anglo-Irish Clare Castletown, the Lady Castletown.
In 1872, he married a childhood friend Fanny Bowditch Dixwell. The following year, he bought a farm in Mattapoisett, Massachusetts, and the couple lived there. Their marriage lasted until Fanny died in April 30, 1929. The couple never had children of their own, but adopted and raised an orphaned cousin, Dorothy Upham.
He died of pneumonia on March 6, 1935, in Washington D.C., just two days before his 94th birthday. In his will, he left his residuary estate to the U.S. government. He is buried in Arlington National Cemetery.
Trivia
During his three-decade long career, he wrote 72 separate opinions and penned 852 majority opinions. Because his dissents often acquired so much authority, he came to be known as ‘The Great Dissenter’. Two of his most famous dissents were in ‘Abrams v. United States’ and ‘Lochner v. New York.’
Recommended Lists:
Lawyers & Judges #158
You May Like

See the events in life of Oliver Wendell Holmes Jr. in Chronological Order