Nora Ephron was an American journalist, playwright, screenwriter, novelist, columnist, director and producer. She is mostly known for the romantic comedies that she wrote and directed, like, ‘Sleepless in Seattle’, ‘When Harry Met Sally’, ‘You’ve Got Mail’, etc. She started out her creative journey as a journalist for the New York Post and worked there for the initial six years of her career, which helped her in finding her voice to finally be able to pen down her bold, eccentric and satirical ideas into famous essays and novels. But it was Ephron’s leap into Hollywood with her distinctive talent for screenwriting that established her talent for the world to notice. Her first script ‘Silkwood’ paved the way for her future success in the field of screenwriting. But she did not just restrict herself to that; with ‘This is My Life’ she entered into the creative and elaborate world of film making. She also co-authored the Drama Desk Award–winning theatrical production ‘Love, Loss, and What I Wore’ with her sister Delia and in 2013, Ephron received a posthumous Tony Award nomination for Best Play for her play ‘Lucky Guy’. American Celebrities
Screenwriters
Playwrights
Screenplay Writers
T V & Movie Producers
Childhood & Early Life
Nora Ephron was born in New York to Henry and Phoebe Ephron. Both her parents were screenwriters and she was brought up in a creative environment in Beverly Hills along with her three sisters.
She graduated from Beverly Hills High School and later on received her degree from Wellesley College in Massachusetts in 1962. After that she took up a job as an intern in the White House. 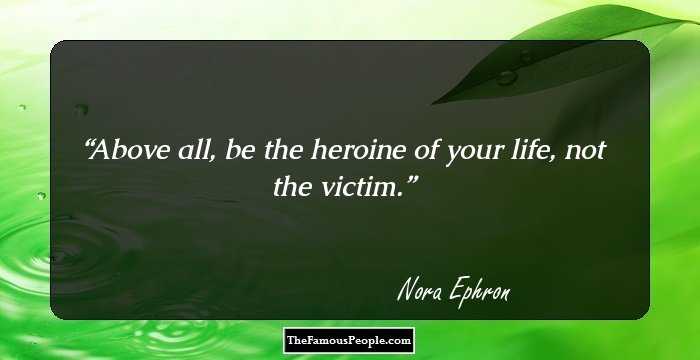 Quotes: Life
Continue Reading Below
Career
After her brief stint at the White House, Ephron started working for the New York Post as a reporter. She landed the job after the editor liked a parody that she wrote on the ‘New York Post’.
She became a famous writer with the New York Post, especially after she came out with the sensational news in 1966 that singer Bob Dylan had married Sara Lownds in a private ceremony three-and-a-half months before.
Soon after her success with the Post, she started writing a column on women’s issues for Esquire and wrote about various topics and personalities that interested the female gender, like—on Dorothy Schiff, Betty Friedan, her alma mater Wellesley.
In the 1970s, her articles, focused on sex, food, and New York City, were collected and published in 1970's ‘Wallflower at the Orgy’ and 1975's ‘Crazy Salad’. ‘A Few Words About Breasts’, made her name as an essayist.
In 1983, she made an entry into the world of movies by writing the screenplay for the drama ‘Silkwood’. The story became so popular that she received an Academy Award nomination in the category of Best Screenplay.
Her success from ‘Silkwood’ was followed with her screenplay for ‘Harry Met Sally (1986)’—starring Billy Crystal and Meg Ryan. The engaging and humorous story about a relationship between a man and woman earned her another Oscar nomination.
In 1992, Ephron made an attempt at film making and directed her first film, ‘This is My Life’, a family drama focusing on the life of a single mother aspiring to become a stand-up comedian. The movie received good reviews.
In the following year, she wrote and directed, ‘Sleepless in Seattle’. The movie starred Meg Ryan and Tom Hanks; along with her third Oscar nomination, Ephron earned a box office success worth more than $120 million.
Meg Ryan and Tom Hanks came together again for Ephron’s American romantic comedy ‘You’ve Got Mail’ in 1998. The screenplay was written by Ephron and her sister Delia, based on the play ‘Parfumerie’ by Miklos Laszlo.
Continue Reading Below
Ephron’s next film ‘Bewitched’ released in 2005 but it failed to generate any positive response. In the following year, she resumed her role as an essayist and released ‘I Feel Bad about My Neck: And Other Thoughts on Being a Woman’.
Her last epic work was a comedy about the life of Julia Child and a young, aspiring cook, titled ‘Julie & Julia’ in 2009. She received critical acclaim for the film, which starred Meryl Streep and Amy Adams. 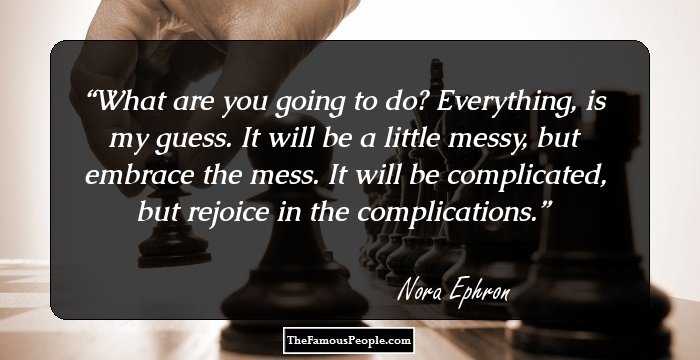 Quotes: You, Will
Major Works
Ephron started her creative career with journalism and writing essays but it was leap into screenwriting and film making that made her extremely famous. She is known for writing and directing epic films like, ‘Sleepless in Seattle’, ‘Julie & Julia’, etc.
Awards & Achievements
Ephron was the winner of Women in Film Crystal Award and apart from that has won a BAFTA Award for ‘When Harry Met Sally’, Writers Guild of America Awards’ Ian McLellan Hunter Award and Casting Society of America’s Golden Apple Award. 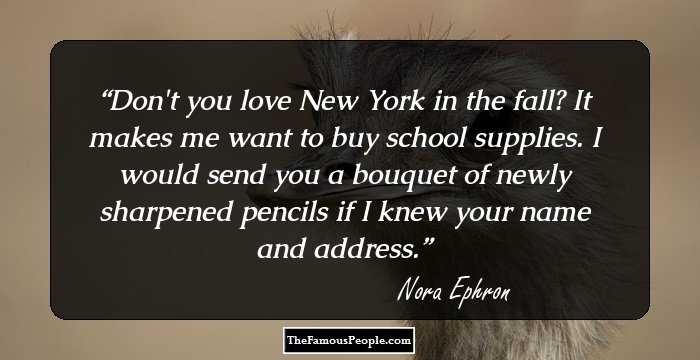 Quotes: You, Me, Love, I
Personal Life & Legacy
Ephron married thrice: her first marriage was with writer Dan Greenburg (from 1967-76). Her second marriage was with journalist Carl Bernstein of Watergate fame (from 1976-80)—the couple had two children together: Jacob and Max.
She got married for the third time to Screenwriter Nicholas Pileggi in 1987 and remained married to him until her death.
Ephron died of pneumonia, a complication resulting from acute myeloid leukemia in 2012. Her condition with acute myeloid leukemia was diagnosed 6 years before her death.
Trivia
The Nora Ephron Prize is a $25,000 award by the Tribeca film festival for a female writer or filmmaker "with a distinctive voice."
She was a regular blogger and part-time editor of Huffington Post.
She knew the true identity of ‘Deep Throat’.
She co-authored the play ‘Love, Loss, and What I Wore’ (based on the book by Ilene Beckerman) with her sister Delia.
Her son Jacob Bernstein is supposed to direct an HBO movie on her life called ‘Everything Is Copy’.
The failure of her second marriage inspired her to write the novel ‘Heartburn’.
Her sisters Delia and Amy are screenwriters and her third sister, Hallie, is a journalist, book reviewer and novelist.

Quotes By Nora Ephron | Quote Of The Day | Top 100 Quotes

See the events in life of Nora Ephron in Chronological Order