(One of the Best and Most Eccentric Actors of His Generation)

Artistically endowed with exceptional acting talent and impressive personality, Robert De Niro is a stellar actor who needs no introduction of sorts. Fans adore him for his impeccable style, while critics admire and adulate him for his extraordinary passion towards acting. The actor who rose to fame with ‘Bang the Drum’ and ‘Mean Streets’ has had an upward and escalating career ever since, delivering one hit performance after the other. A seasoned character actor, he is applauded and commended by one and all for his meticulous approach that he takes towards acting and his aim for achieving precision and excellence in every role he dons. What is interesting to note is that unlike his colleagues and counterparts, he has shown no signs of taking it slow till date, with the recent release of ‘Silver Lining Playback’ being a testimony to the same. He is one of the best known method actors of Hollywood today who employs even the extremes of tactic to give richness, reliability and tangibility to his characters to elicit the best performance out of himself. In his career that has spanned over five decades and still going strong, he has done various genres of movies, right from, action, romantic, thriller and comedy. This Academy Award winning actor has also donned the hat of a director twice, for the movies, ‘A Bronx Tale’ and ‘The Good Shepherd’. To know more about his life and profile, read on. American People
Directors
American Men
New Yorkers Actors
Leo Actors
Childhood & Early Life
Robert De Niro was born to Robert De Niro, Sr. and Virginia Holton Admiral in Greenwich Village, New York City. His father was an abstract expressionist painter and sculptor, AND his mother was a poet and painter by profession.
His parents separated when he was three years old, and he was thereafter taken care of by his mother. However, his father remained in contact with young Niro and played an influential role in his upbringing.
He attained his preliminary education from PS 41, Elisabeth Irwin High School and Little Red School House. His first stint at acting was for a school play, ‘The Wizard of Oz’, wherein he played the character of Cowardly Lion. This debut on stage paved way for his future course of life.
He enrolled at McBurney School for completing high school studies but later switched to Rhodes Preparatory School. However, he dropped out from both of them and started to pursue a career in acting. He took up acting course at Stella Adler Conservatory and later at Lee Strasberg's Actors Studio. 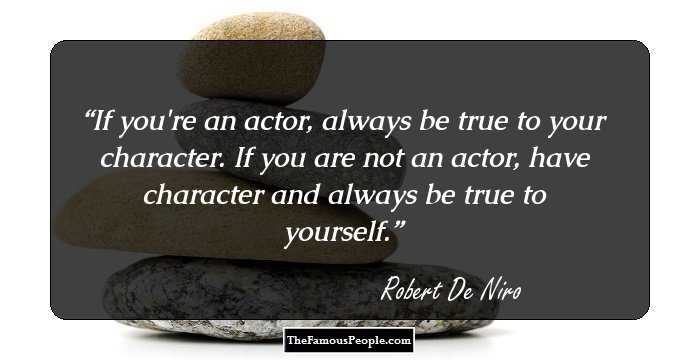 Quotes: You, Yourself, Character
Continue Reading Below
Career
His career as an actor kick-started in 1963, when he bagged a small role opposite Jill Clayburgh for the movie, ‘The Wedding Party’. The film however hit the theatres only in 1969.
He did a couple of cameo appearances for the movies, including the French film, ‘Three Rooms in Manhattan’, which technically became his debut movie and ‘Les Jeunes Loups’. His first film as a lead actor was ‘Greetings’, released in 1968.
Year 1973 can be marked as a breakthrough year for this budding star. Two of his movies—‘Bang The Drum Slowly’ and ‘Mean Streets’—were released this year and his performance in both the movies was highly appreciated and applauded. While ‘Bang The Drum Slowly’ had him playing the role of a terminally ill baseball player with perfection, ‘Mean Streets’ exposed his excellence over playing the character of Johnny Boy, a small-time crook.
Year 1974 only catapulted his position as the finest actor of the industry with the release of Francis Ford Coppola's ‘The Godfather Part II’. His role-playing of the character of Vito Corleone won him the prestigious Academy Award.
Following the success of ‘Mean Streets’, he developed a strong bond with director Martin Scorsese who cast De Niro in many of his successful subsequent ventures. ‘Taxi Driver’ was one such film from the Niro-Scorsese camp, released in 1976. His impressive performance and remarkable dialogue delivery skills earned him Academy Award nomination for Best Actor.
Other releases of 1976 include Bernardo Bertolucci's ‘1900’, which was an epic biographical exploration of life in Italy before World War II,’ and Elia Kazan’s ‘The Last Tycoon’. Though the movies did only fair well at the box office, his acting was praised by the audience and the critics alike.
The start of the decade of 1980s brought good news for him. He played the character of Jake La Mottafor the Scorsese film, ‘Raging Bull’. The film was poorly received at the box office but was applauded by the critics. His effective role-play won him an Academy Award for Best Actor.
With an aim to try new genres and not be typecast as a mob hero, he expanded his artistic horizons and was seen tickling the rib of the audience with his accurate comic timing in the movies, ‘The King of Comedy’, ‘Brazil’ and ‘Midnight Run’
The decade of 1990s began on a good note for this talented actor as his film, ‘Goodfellas’ (1990), did exceptionally well at the box office. Three years later, he donned the hat of a director with his debut directorial venture titled, ‘A Bronx Tale’. He ended the decade with ‘Analyze This’ (1999), a film which made hilarious spoof on mob movies.
Continue Reading Below
Keeping the laughter therapy on, in 2000, he came up with his next movie, “Meet the Parents’ cast opposite Ben Stiller. The film met with an overwhelming response which spawned its sequels, ‘Meet the Fockers’ and ‘Little Fockers’. Interestingly, the sequels also did a good business commercially and were a hit.
In 2002, he reprised his role of Paul Vitti in 1999 comedy, ‘Analyze This’ with its sequel, ‘Analyze That’. Same year, he also hosted a show on CBS titled, ‘9/11’ which was a documentary about the September 11, 2001 attacks.
In 2004, he gave a voice over for the character of Don Limo in the animated film, ‘Shark tale’. This was his first experience with voice acting.
Two years later, in 2006, he donned the director’s cap for a second time in the spy thriller ‘The Good Shepherd’. He was part of the star cast that included Matt Damon and Angelina Jolie.
In 2010, Robert Rodriguez and Ethan Maniquis’s directorial venture, ‘Machete’ saw him play the character of Senator John McLaughlin in this action-packed film. Same year, he was seen in thriller movie, ‘Stone’ alongside Edward Norton and Milla Jovovich.
In 2011, De Niro displayed his versatility by acting is films of different genres. While his first release was an action film ‘Killer Elite’, the second was a film adaptation of the novel ‘The Dark Fields’, titled, ‘Limitless’. He ended the year with a Garry Marshall’s romantic-comedy ‘New Year’s Eve’.
Showing no signs of taking it slow, in 2012, he delivered a power packed performance for the movie ‘Silver Linings Playbook’, for which he won an Academy Award nomination. He also appeared in movies such as ‘Freelancers’, ‘Red Lights’ and ‘Being Flynn’.
In 2013, he starred in the movies, ‘The Big Wedding’, ‘Killing Season’ and ‘The Family. Some of his movies scheduled to release in 2013 and the following year include, ‘Last Vegas’, ‘American Hustle’, ‘Grudge Match’, ‘Motel’, ‘Hands of Stone’ and ‘The Irishman’. 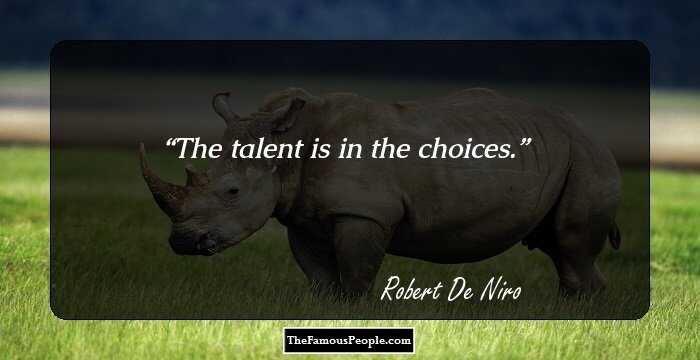 Continue Reading Below
Major Works
His breakthrough performance came with ‘Bang the Drum’ and ‘Mean Streets’, both of which, released in a gap of two months, brought widespread acclaim to him as an actor. Additionally, they did a good business at the box office, ‘Mean Streets’ making a whopping $3, 000, 000 profit.
The epic drama, The Godfather Part II’, a Francis Ford Coppola productions, further cemented his position as an actor. The film gained a widespread appeal and recognition, its eleven nominations and eventual six victories at the Oscars standing a testimony to the same. The movie did a business of $193 million at the box office.
Awards & Achievements
He has been nominated seven times for the prestigious Academy Awards, twice in the category of Best Supporting Actor and five times for Best Actor. He twice won the award, Best Supporting Actor for ‘The Godfather Part II’ and Best Actor for ‘Raging Bull’.
He has been nominated eight times for the Golden Globe Awards in various categories such as Best Actor – Motion Picture Drama and Best Actor – Motion Picture Musical or Comedy. He won the award for his spellbinding performance in ‘Ranging Bull’ in the category of Best Actor – Motion Picture Drama.
In 2011, he was conferred with the prestigious Cecil B. DeMille Award, Golden Globe Lifetime Achievement Award for his exemplary artistic skills and exceptional talent. 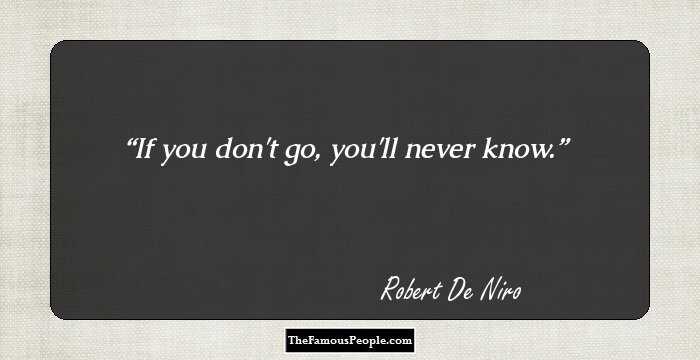 Personal Life & Legacy
He walked the aisle with Diahnne Abbot in 1976. The couple was blessed with a son, Raphael. He adopted Abbott’s daughter from previous marriage, Drena. The two parted ways in 1988.
In 1995, he fathered twin sons conceived by in-vitro fertilization and delivered by a surrogate mother in 1995, out of his relationship with Toukie Smith.
In 1997, he tied the nuptial knot for a second time with Grace Hightower. The duo was blessed with a son, Elliot the following year. They parted ways in 1998 (not legally though) only to renew their vows in 2004. Following this, they were blessed with a daughter Helen Grace in 2011.
He faced health concerns in 2003 when he was diagnosed with prostate cancer. However, a surgical intervention has helped his medical state.
Trivia
This super-successful and multi-talented actor-director from Hollywood was nicknamed ‘Bobby Milk’ as a child, due to his thin and lean frame. 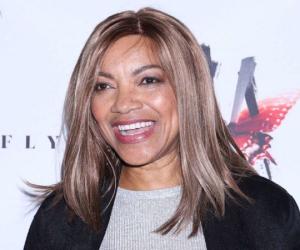