(Former Premier of the Soviet Union)

Nikita Sergeyevich Khrushchev was a Soviet politician. He was instrumental in provoking the ‘Cuban Missile Crisis’ that brought the Soviet Union and the United States to the brink of a nuclear war. He was born into a poor family of Ukrainian peasants and faced many hardships in his early life. After taking up several odd jobs in the industrialized area of Russia, he began his political career as secretary of the Communist party. It did not take him long to establish himself as a prominent member of the party; his involvement in the party and the ‘Red Army’ led him to become one of the most prominent members of the party. He was a close ally of Joseph Stalin, but after Stalin’s death, he became involved in the reformation, also known as ‘De-Stalinisation.’ After the death of Stalin, he rose to power, overthrowing all the other leaders of the party. However, it led to an intense power struggle within the Communist party. Khrushchev era saw the progress of the early Soviet space program, and several liberal reforms in areas of domestic policy. His political moves resulted in the ‘Cuban Missile Crisis’ and brought the United States and Soviet to the brink of a nuclear war. In 1964, he was forced to relinquish power by his party members. Roman Abramovich
15th April In History
DID WE MISS SOMEONE?
CLICK HERE AND TELL US
WE'LL MAKE SURE
THEY'RE HERE A.S.A.P
Quick Facts

Khrushchev was born on April 15, 1894, in Kalinovka, Ukraine, to Sergei and Xeniya Khrushcheva, who were peasants. He had a sister named Irina.

Working as a herder from a very young age, he received school education for just four years at the village parochial school and then at the Kalinovka’s state school.

In 1908, he moved to Yuzovka. The city was one of the most industrially developed regions of the Russian empire and Khrushchev found job as a metal fitter’s apprentice.

Soon, his apprenticeship ended and he started working as a machine repairman in the coal mines of Yuzovka. He worked there for almost a decade. 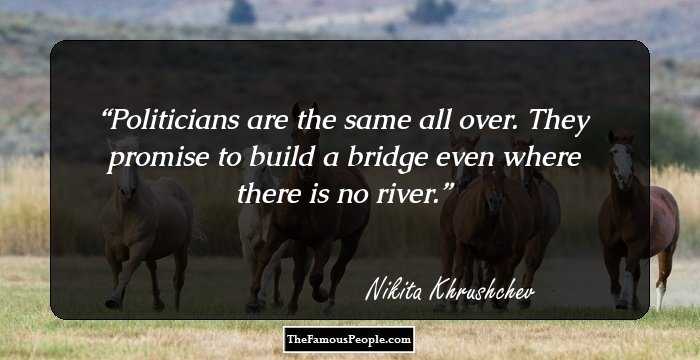 He joined the Communist party in 1918, when he was 24 years old. Being a communist, he fought in the civil war by enrolling in the ‘Red Army.’

The Russian revolution was storming the country and ‘Red Army’ or ‘The Bolsheviks’ overthrew the Czarist rule of Russia under the leadership of Vladimir Lenin. The civil war broke out, and Khrushchev was in service for three years during the war.

He then returned to Yuzovka and took up job as an assistant manager of a mine. Soon, he joined the ‘Donets Industrial Institute’ run by the Soviet (Communist ruling party) and received further training in communist ruling.

At the institute, he was appointed as secretary of the ‘Communist Party Committee.’ In 1925, he started serving as the secretary of Petrovo-Marinsky district of Yuzovka. It was here that he grew close to Lazar M. Kaganovich, a trusted associate of Joseph Stalin.

Starting from 1929, he attended the ‘Industrial Academy’ in Moscow for two years. He was trained in industrial administration. Soon, he became a district party secretary in Moscow.

Over the next four years, he became an important member in the party, joining hands with the highest ranked party officials. He was now the head of the party organization of Moscow.

In 1938, he became the first secretary of the ‘Ukrainian Communist Party’ when most of the party members were eliminated by Stalin. He then became the chief executive of Ukraine and was in authority until 1949.

Around the same time, ‘World War II’ progressed and Khrushchev served in the ‘Red Army,’ advancing to the rank of lieutenant general.

In 1949, he was ordered to stay in Moscow to serve in the Communist party’s Secretariat, which was directed by Stalin.

After the death of Stalin in 1953, Khrushchev was among other important party members who assumed almost all of the power. Soon, he was appointed as the first secretary of the ‘Central Committee’ of the ‘Soviet Communist Party.’

It took almost two years for him to find his supporters in the party and make important political alliances. He then became the top most political figure in the Soviet Union in the year 1955.

In 1958, he proved his importance in the political set up of Soviet Union by becoming the chairman of the ‘Council of Ministers’ while serving as the first secretary of the Soviet Communist Party's ‘Central Committee.’

Following the unrest due to his policies and other national setbacks, he was forced to resign in October 1964. He spent a quiet life in Moscow after his retirement. 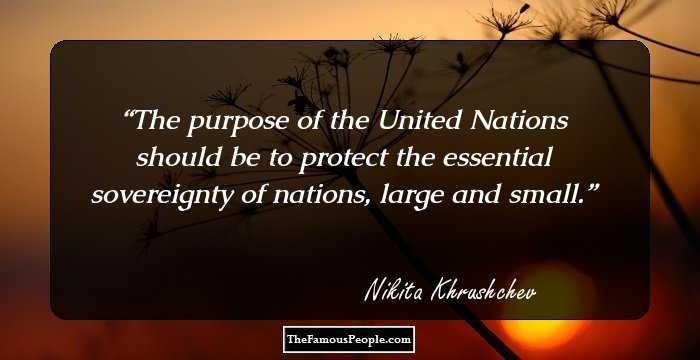 During his term in the ‘Red Army’ of the Soviet Union, Khrushchev won several honors like ‘Hero of Socialist Labour,’ ‘Order of Lenin’ (twice), and ‘Order of the Patriotic War.’

Khrushchev’s first marriage was with Yefrosinia Pisareva in 1914. The couple had a daughter, Yulia, and a son, Leonid. Pisareva passed away during a famine.

In 1922, he married Marusia, but the marriage did not last long. After separating from Marusia, he met Nina Petrovna Kukharchuk whom he married in 1923. They had three children: two daughters, Rada and Elena, and a son, Sergei.

Khrushchev died from heart attack on September 11, 1971, in Moscow, at the age of 77. His body was buried in the ‘Novodevichy Cemetery,’ after the Russian government refused to offer him a state funeral. 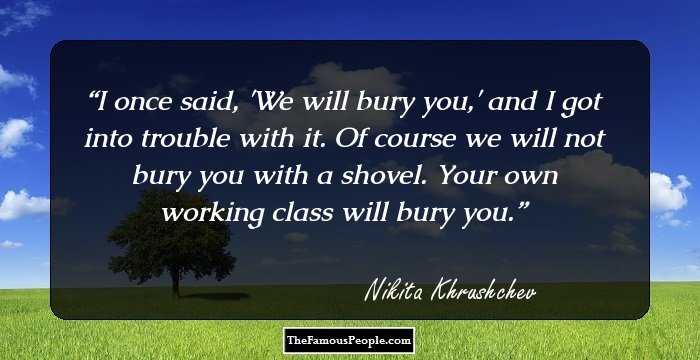 Quotes: You, Will, I

Quotes By Nikita Khrushchev | Quote Of The Day | Top 100 Quotes

See the events in life of Nikita Khrushchev in Chronological Order