Who is Nicolas Cage?

Nicolas Cage is one of the most famous actors in Hollywood. Be it for his versatility or the discovery of the new acting process called ‘method acting’, Cage is currently one of Hollywood’s most talented actors. He hails from anupright background, where both, his mother and father, though separated, were well-respected achievers in their own fields. He is also related to Francis Ford Coppola, but changed his name so that he could create an identity of his own in Hollywood, devoid of any sort of family connections. He dropped out of high school, so that he could pursue a career in acting. His life as an actor began with teenage comedies like ‘Fast Times at Ridgemont High’ and ‘Valley Girl’. Instead on piggy-backing off his uncle’s accomplishments, he struggled for a few years on his own until he was cast in films like ‘The Cotton Club’, ‘Birdy’, ‘Moonstruck’, ‘Vampire’s Kiss’, ‘Wild At Heart’ and ‘Leaving Las Vegas’. He also caught the attention of the audience with his hair-raising performances in mainstream box-office hits such as, ‘Con Air’, ‘City of Angels, ‘National Treasure’, ‘The Weather Man’, ‘Ghost Rider’, ‘The Sorcerer’s Apprentice’, ‘Knowing’ and ‘The Croods’. Acting aside, Cage is an avid collector of comics, owns a variety of exotic pets and is also an automobile buff. Philanthropists
Actors
T V & Movie Producers
American Men
Childhood & Early Life
Nicolas Kim Coppola was born on January 7, 1964 to August Floyd Coppola, a literature professor and Joy Vogelsang, a dancer and choreographer, in Long Beach, California. He is of Italian-German-Polish descent and was raised as a staunch Catholic.
The famous film director, Francis Ford Coppola is his uncle and he is the cousin of Sofia Coppola, Roman Coppola and Gian-Carlo Coppola. He also has two brothers, Christopher Coppola and Marc Coppola.
He studied at Beverly Hills High School but he was never really interested in academics because he wanted to act from a very young age. Thus, he dropped out of school and joined UCLA School of Theater, Film and Television.
Not wanting to lurk in the shadows of his successful uncle’s name ‘Coppola’, he changed his name from Nicolas Coppola to Nicolas Cage, named after the Marvel Comics superhero, Luke Cage. He made his television debut in 1981. 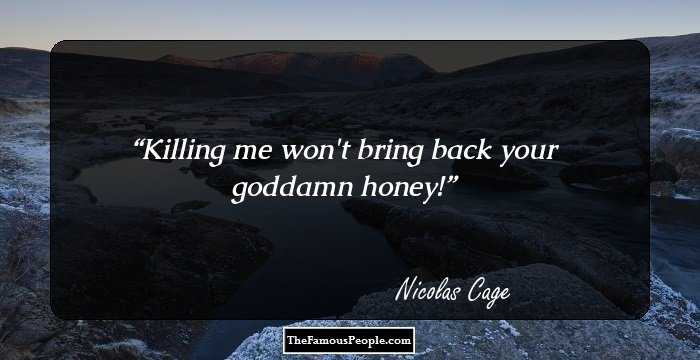 Nicolas Cage made his debut in the big screen with the coming-of-age movie, ‘Fast Times at Ridgemont High’, in 1982. He appeared in his next film, ‘Valley Girl’, which released the following year.

In 1983, he appeared in his uncle, Francis Ford Coppola’s ‘Rumble Fish’.

He appeared in the 1984 film, ‘Birdy’, for which he reportedly extracted two teeth in order to do justice to his role. From very early on, Cage became known for his passionate acting and his personality. The same year, he appeared in ‘Racing with the Moon’ and starred in the film, ‘The Cotton Club’, directed by Francis Ford Coppola.

In 1986, he starred in comedy-drama film opposite Kathleen Turner titled, ‘Peggy Sue Got Married’. This was once again directed by Francis Ford Coppola and the film became a huge-hit at the box office.

He was cast in his first critically-acclaimed movie, ‘Moonstruck’ alongside Cher, in 1987. The same year, he also appeared in the movie, ‘Raising Arizona’.

In 1989, he played the role of ‘Peter Leow’ in the movie, ‘Vampire’s Kiss’ for which he agreed to eat a live cockroach for his role. This role catapulted him to fame and cemented his place in Hollywood forever.

1990 proved to be an extremely busy year for Cage with him starring in four films; ‘Tempo di uccidere’, ‘Fire Birds’, ‘Wild At Heart’ and ‘Zandalee’.

Through the 1990s, he appeared in a series of box-office hits including, ‘Honeymoon in Vegas’, ‘Guarding Tess’, ‘Kiss of Death’, ‘Leaving Las Vegas’, ‘The Rock, ‘Con Air’, ‘Face/Off’, ‘City of Angels’ and the paramedic production, ‘Bringing Out the Dead’.

He made his directorial debut with the film ‘Sonny’ in 2002 and was also cast in ‘Adaptation’ and Ridley Scott’s drama, ‘Matchstick Men’, the latter released the following year.

He starred in his biggest box-office hit ‘National Treasure’, which also starred Jon Voight and Harvey Keitel in 2004. The following year, he starred in moderately successful films, ‘Lord of War’ and ‘The Weather Man’.

In 2006, he was seen in the horror film, ‘The Wicker Man’, which was a remake of the British classic of the same name. The film fared moderately at the box-office, earning tepid reviews. The same year, he starred in ‘Too Tough to Die’ and ‘World Trade Center’.

2007 proved to be an extremely fruitful year for the actor with a series of successful releases including, ‘Ghost Rider’, ‘The Dresden Files’ and the sequel, ‘National Treasure: Book of Secrets’. The same year, he created a comic book titled, ‘Voodoo Child’.

In 2008, he starred as a contract killer for the film, ‘Bangkok Dangerous’, followed by ‘Knowing’ the next year, which was panned by the critics. He also starred in ‘The Bad Lieutenant: Port of Call’, released in 2009.

The year 2010 was a magical year for Nicolas Cage as he starred in a historical film, ‘Season of Witch’ and also appeared as the sorcerer, ‘Balthazar’ in the box-office hit, ‘The Sorcerer’s Apprentice’.

From 2011 to 2013 he starred in a number of films including, ‘Trespass’, ‘Seeking Justice’, the sequel, ‘Ghost Rider: Spirit of Vengeance’ and the animated film, ‘The Croods’.

In 2020, Nicolas Cage was seen in the sequel to the 2013 film 'The Croods'. The sequel was named as 'The Croods: A New Age' and Nicolas reprised his role as Grug. 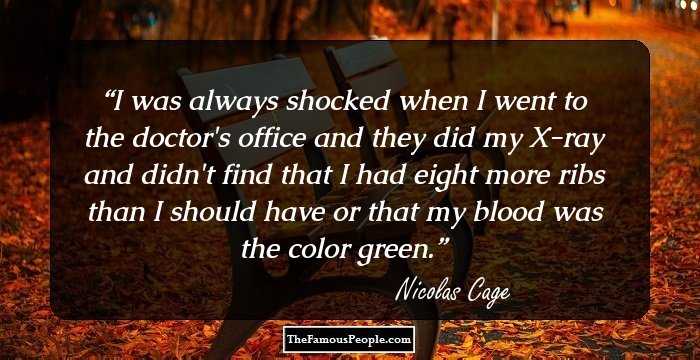 Capricorn Actors
American Actors
Actors Who Are In Their 50s
American TV & Movie Producers
Major Works
‘Moonstruck’ released in 1987, was one of his first commercial, hit films. The film won 7 important awards including the Oscars and the Golden Globe Awards. He was also nominated for a Golden Globe Award in the ‘Best Actor’ category for his performance in the film. The movie became a huge hit and collected a total of $80,640,528 at the box-office.
In ‘Leaving Las Vegas’, he played the role of a miserable alcoholic. He received immense praise and was lauded for his acting skills. He received an Oscar for his performance in the film. The movie collected a total of $32,029,928 at the box-office.
He starred in the hit American-adventure film by Walt Disney, ‘National Treasure’, which released in 2004. The film became a huge box-office success earning over $347.5 million around the world and spawning a sequel, ‘National Treasure: Book of Secrets’, in which he played the protagonist’s role.
Recommended Lists: 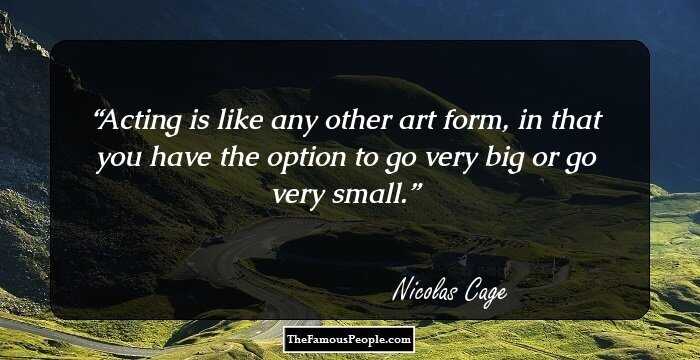 Nicolas Cage dated Christina Fulton in 1988 with whom he had a child, Weston Coppola Cage.

He married his first wife, Patricia Arquette on April 8, 1995 and divorced her in 2001. It is said that he proposed his wife for marriage on the first day he met her, but she agreed for marriage years later.

He married the daughter of Elvis Presley, Lisa Marie Presley on August 10, 2002 and the couple filed for divorce the same year, which was finalized two years later.

In March 2019, he married a make-up artist Erika Koike in Las Vegas, but filed for annulment four days later.

He supports a number of charities and has been extremely generous when it comes to donations. He has donated around $2 million to ‘Amnesty International’ and is considered one of the most ‘generous stars of Hollywood’.

At one point it is said that Cage owned over 15 real-estate properties and also owned a medieval castle in Germany, which he sold for a reported $2.5 million. He later purchased Midford Castle in England and is also the owner of a number of homes in Bahamas, Bel Air, Nevada and Paradise Island.

He is the proud owner of 22 automobiles, including 9 Rolls Royce’s.

He was the owner of a number of comics which he sold at an auction for a record breaking $2.16 million.

Trivia
This famous actor, director and producer from the ‘National Treasure’ fame, once owned a number of exotic pets including a crocodile, two King Cobras, a salt-water shark and a lizard.

Quotes By Nicolas Cage | Quote Of The Day | Top 100 Quotes

See the events in life of Nicolas Cage in Chronological Order