Nicholas Sparks is an American romance novelist and screenwriter best known for the novel ‘The Notebook.’ Till date, he has published two non-fiction books and nineteen novels. Several of his novels have attained international success and many of his romantic-drama novels have been adapted to movies, all with multimillion-dollar box office grosses. Born in Omaha, Nebraska, Sparks began writing in 1985 while he was studying business finance at the University of Notre Dame. His work got published for the first time in 1990. His breakthrough novel titled ‘The Notebook’ was published in 1996 after being discovered by the literary agent Theresa Park. Since then, Sparks has continued to achieve success in writing. An extremely benevolent person, he contributes frequently to numerous charities including the Creative Writing Program (MFA) at the University of Notre Dame where he funds internships, scholarships, and annual fellowships. On a personal note, Sparks is a doting father of five kids, all of whom he had with his ex-wife Cathy Cote. American People
Screenwriters
Philanthropists
American Men
University Of Notre Dame
Career
Nicholas Sparks started writing when he was 19 years old. In 1985, while at Notre Dame, he penned his first novel ‘The Passing’ that never got published. He then wrote another unpublished novel titled ‘The Royal Murders’ in 1989. After college, he sought to get his novels published but was rejected. Sparks then spent the next three years trying his hands in other fields, including real estate, and purchase and sale of dental products, among others. In 1990, he co-wrote the book ‘Wokini: A Lakota Journey to Happiness and Self-Understanding’ with Billy Mills. The book went on to be published by Random House, Feather Publishing, and Hay House. It sold about 50,000 copies in the first year of its release.
Sparks started selling pharmaceuticals in 1992. During this time, he wrote his novel ‘The Notebook’ which was later discovered by the literary agent Theresa Park. The novel was published in 1996 and became a New York Times best-seller in the first week of its release. Soon after this, the American novelist came up with his second romantic work ‘Message in a Bottle’.
In October 1999, he published ‘A Walk to Remember’, a story of two teenagers who get romantically linked to each other despite the differences in their personalities. This novel was later adapted into a movie of the same name. Sparks then came up with his novel ‘The Rescue’ that peaked at #2 on the New York Times Best Sellers list on 8 October, 2000 and went on to peak at #1 the following week. During 2001 and 2002, his novels 'A Bend in the Road' and 'Nights in Rodanthe' were published. Then in 2003, Sparks released his seventh novel titled 'The Guardian’. The same year, his romantic novel 'The Wedding' also got published. He then released his book ‘Three Weeks with My Brother’.

Sparks next came up with two romantic novels ‘True Believer’ and ‘At First Sight,’ both in 2005. The following year, he released his novel ‘Dear John’ that was placed in the New York Times bestseller list of 2007. Shorty afterwards, Grand Central Publishing published his novel ‘The Choice’. Sparks then released his romance novel ‘The Lucky One’ which was later adapted in to a film starring Taylor Schilling and Zac Efron. In 2009 and 2010, the American novelist released two novels, namely 'The Last Song' and 'Safe Haven'. He published ‘The Best of Me’ in 2011. In September 2013, he released his 17th romance novel titled ‘The Longest Ride’. Its film adaptation was released on April 10, 2015. His more recent novels are ‘See Me’ (2015), ‘Two by Two’ (2016), ‘Every Breath’ (2018) and 'The Return' (2020). 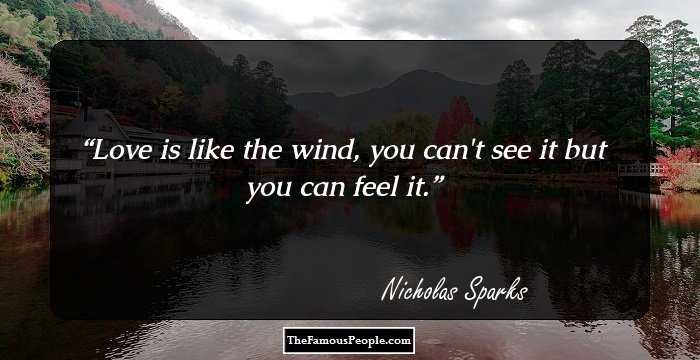 Quotes: You, Love, Like
Continue Reading Below
Personal Life
Nicholas Charles Sparks was born on December 31, 1965 in Omaha, the USA. His father Patrick Michael Sparks was a professor of business while his mother Jill Emma Marie Sparks was an optometrist's assistant. Sparks grew up with his two siblings, elder brother Michael Earl Sparks and younger sister, Danielle, who died of a brain tumour at the age of 33. His mother lost her life in a horse riding accident when Sparks was in his twenties. He lost his father in a car accident when the former was in his thirties.
In 1984, Sparks graduated from Bella Vista High School. He then went on to attend the University of Notre Dame on a full sports scholarship. He majored in business finance. In 1988, he met his future wife Cathy Cole. The two married the following year and had twin daughters and three sons. The couple amicably separated in 2014 and divorced the following year.
Recommended Lists: 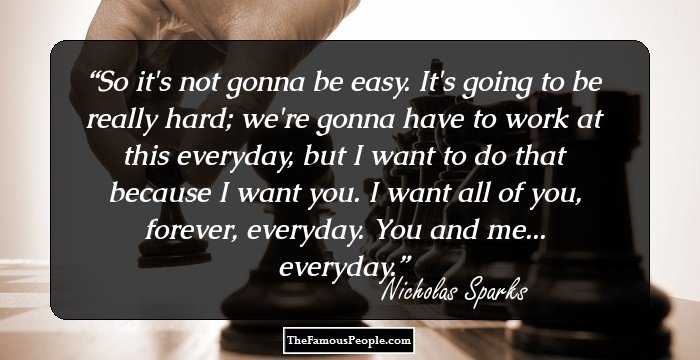 Quotes: You, I
Philanthropic Works
Sparks once donated a hefty amount to New Bern High School to help built an all-weather track surfacing. In 2008, he and his then-wife donated about $10 million to start a Christian college-prep private school under the name The Epiphany School of Global Studies. Sparks was later sued by the headmaster of the school who accused the former of homophobia, anti-Semitism, and racism. 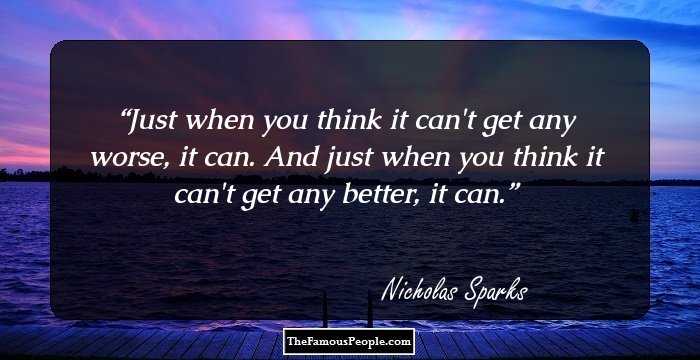 Quotes: You, Think
Trivia
His deceased sister Danielle was the inspiration for the key character in his novel ‘A Walk to Remember.’
Nicholas Sparks is a black belt holder in Tae Kwon Do.
After receiving his first payment for ‘The Notebook’, Sparks bought his then-wife Cathy a new wedding ring with it.
Each of his kids’ names has been taken from characters in his novels/books.
Sparks was once chosen as the 'Sexiest Author' by the renowned ‘People Magazine.’

Quotes By Nicholas Sparks | Quote Of The Day | Top 100 Quotes