Paul Hogan is an Australian comedian, actor, screenwriter, and TV presenter. He is best known for writing the screenplay and playing the lead role in the action comedy film ‘Crocodile Dundee’. He earned an Oscar nomination in the ‘Best Original Screenplay’ category for this movie and won the Golden Globe Award for his performance as an actor. Hogan was born in New South Wales, Australia, and worked as a rigger before entering the field of entertainment. He started his comedic career with his own sketch comedy program ‘The Paul Hogan Show’ and went on to gain international attention for his lead role in the action comedy film ‘Crocodile Dundee’ which was a critical and commercial success. He reprised his role in the sequels ‘Crocodile Dundee II’ and ‘Crocodile Dundee in Los Angeles’. The sequels, however, couldn’t match the critical success of the first movie of the series. His acting in the film ‘Strange Bedfellows’, where he played the lead role, was also much appreciated. Besides acting, he was also an executive producer of the films ‘Almost an Angel’ and ‘Lightning Jack’. He was named the Australian of the Year in 1985, and the following year, he was appointed a ‘Member of the Order of Australia’ for his service to tourism and entertainment. Recently, he was given the ‘Longford Lyell Award,’ which is the highest honor of the Australian Academy of Cinema and Television Arts. Australian People
Screenwriters
T V & Movie Producers
Australian Men
Libra Actors
Childhood & Early Life
Paul Hogan was born on 8 October 1939 in Lightning Ridge, New South Wales, Australia. Not much is known about his parents and childhood.
As a young man, he used to work as a rigger on the Sydney Harbour Bridge. 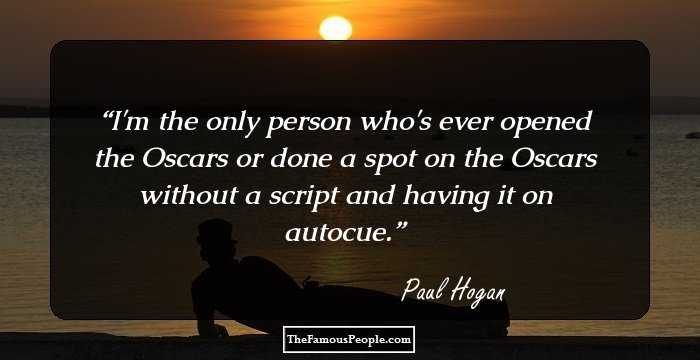 Continue Reading Below
Career
Paul Hogan began his career as a comedian in the Australian TV program ‘New Faces’ in 1971. His style of comedy was much appreciated and it became so popular that he began his own program ‘The Paul Hogan Show’ which he wrote and produced as well.
‘The Paul Hogan Show’ earned much praise and was loved by the audiences. Other than Australia, it also became popular in South Africa. Hogan won the TV Week Logie Award in 1973 in the ‘Best New Talent’ category.
He made his film debut in the 1980 Australian film ‘Fatty Finn’ by playing a cameo role. He was next seen as Lance Corporal Pat Clary, in the TV series ‘Anzacs’ which aired in 1985.
Hogan’s popularity increased further after he wrote the screenplay for and played the lead role in the 1986 film ‘Crocodile Dundee’. Directed by Peter Fairman, the film was about the adventures of a crocodile hunter named Michael J Dundee.
The film ‘Crocodile Dundee’ was made on a budget of less than $10 million and unexpectedly it turned out to be a humongous success financially. The film was a critical success as well.
Hogan won the Golden Globe Award for his performance in the ‘Best Actor in a Comedy or Musical Motion Picture’ category and was also nominated for the BAFTA Award. As a screenwriter, he was nominated for the Academy Award and received another BAFTA nomination.
He reprised his role in ‘Crocodile Dundee II’ in 1988. Although the film did quite well commercially, it wasn’t received well by critics. He next appeared in the 1990 comedy drama film ‘Almost an Agent’. It was a commercial and critical failure. He starred in the 1994 film ‘Lightning Jack’. The film was met with very poor reviews.
In 1996, he was seen in the film ‘Flipper’ in the lead role. The film was directed by Alan Shapiro and it was a commercial failure, earning only $20 million on a budget of $25 budget. The story was criticized but Hogan’s acting was praised. Despite being a flop, the movie was nominated for multiple awards. In 1998, he was seen in the film ‘Floating Away’.
In 2001, he reprised his role of Michael Dundee in the film ‘Crocodile Dundee in Los Angeles’. The film didn’t do well commercially compared to the prequels. It became the last film of the series.
His most recent works include ‘Strange Bedfellows’ (2004) and ‘Charlie & Boots’ (2009). Though he has not acted since then, in 2013, he appeared as a guest in the show ‘Adam Hills Tonight’. 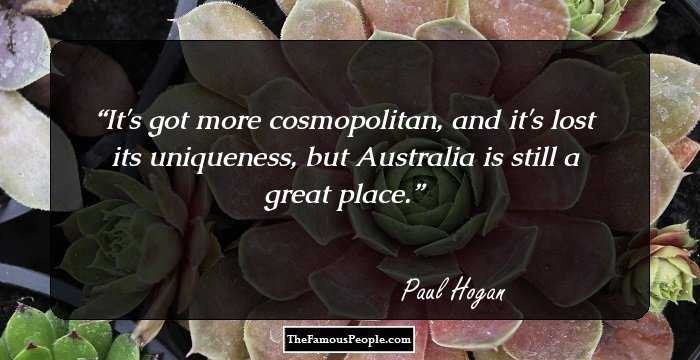 Major Works
Paul Hogan started earning popularity for his comedy show ‘The Paul Hogan Show’, which he wrote, hosted, and produced. It was a big hit and earned much appreciation.
The show was compared to famous shows such as ‘Saturday Night Live’ and ‘The Benny Hill Show’. It aired from 1973 to 1984. Hogan won the TV Week Logie Award in 1973, in the category of ‘Best New Talent’.
Paul Hogan rose to international fame for his role in the action comedy film ‘Crocodile Dundee’. Directed by Peter Fairman, the film earned more than $328 million on a budget of less than $10 million. It earned Hogan an Oscar nomination for ‘Best Original Screenplay’ as well as a BAFTA nomination in the same category. Hogan won the Golden Globe Award for his performance as an actor.
Personal Life
Paul Hogan married Noelene Edwards in 1958. The couple had five children. Though they first divorced in 1981, they remarried the next year. However, they eventually divorced again in 1989.
He was married to Linda Kozlowski from 1990 to their divorce in 2014. They have one child. 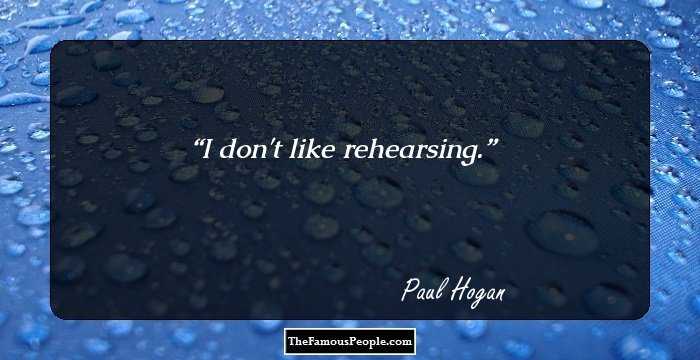 See the events in life of Paul Hogan in Chronological Order