Advanced Search
Nick Cave is known for introducing comicality and raw passion into the ‘Rock’ genre. His band, ‘Boys Next Door’ was fixated with the leitmotifs of Goth, religion, death, violence and love, which later became the central themes of another one of his bands called, ‘Nick Cave and the Bad Seeds’. Raised as a staunch Anglican, most of his works depict the ostensible influence of religion that has hovered over him like a shadow for most part of his life. From ‘Boys Next Door’ to ‘The Birthday Party’ and ‘Bad Seeds’, Nick’s progression as a musician and songwriter was one of phenomenal perseverance and unshakable faith in his own talent. Considered one of the ‘bad boys’ of music in the 20th century, his music continues to enthrall audiences and resonates in the halls of ‘rock’ even today. Recently, in the new millennium, he formed the garage rock band, ‘Grinderman’ that came to be known for its characteristic representation of raw, emotive intensity and thought-provoking lyrics. In the annals of music history, he is identified as one of the primary songwriters of the post-punk era, whose amalgam of blues, rock and gospel supplemented his murky style. Music apart, he released his book, ‘King Ink’ and later ‘King Ink II’ and also briefly acted in films like ‘Wings of Desire’ and ‘Johnny Suede’. Roseanne Park
DID WE MISS SOMEONE?
CLICK HERE AND TELL US
WE'LL MAKE SURE
THEY'RE HERE A.S.A.P
Quick Facts

Australian People
Drummers
Pianists
Guitarists
Rock Musicians
Childhood & Early Life
Nicholas Edward ‘Nick’ Cave was born on September 22, 1957 to Colin Frank Cave and Dawn Treadwell in Warracknabeal, Australia. He has two brothers and a sister. During their early years, the family lived in Wangaratta.
From very early on, he was taught the importance of literature and was raised as an Anglican by his family. He was a troublesome boy and was sent to study in Caulfield Grammar School, a boarding institution.
He then became a day-scholar when his family moved to Murrumbeena. The tragic death of his father in a car-accident changed his perceptions about life, leaving a ‘vacuum’ in his life.
He studied painting after high school at the Caulfield Institute of Technology but dropped out in 1977 to pursue music professionally. Around this time, he also began taking drugs. 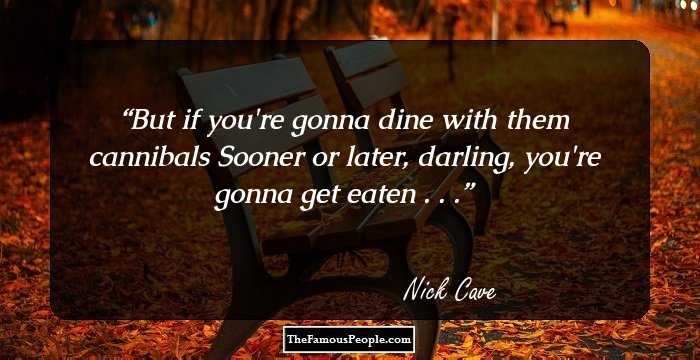 Continue Reading Below
Career
During his high school years, he befriended Mick Harvey, Brett Purcell, Phill Calvert, Chris Coyne and John Cochivera, with whom he formed the band, ‘The Boys Next Door’, in 1977, which later came to be known as ‘The Birthday Party’.
Rowland S. Howard joined the band in 1978, as a guitarist and songwriter. Their music was laced with gothic influences and was usually based on the themes of curses, turpitudes and damnation.
Once Cave got bored with this theme, he released the single, ‘Release the Bats’, in 1981, which served as a comical parody of the ‘dark’ theme that they banked on for so many years. Two years later, he formed the alternative rock band, with him on the lead vocals called, ‘Nick Cave and the Bad Seeds’.
‘The Birthday Party’ disbanded in 1984. It was during this time that two of his songs were featured in the film, ‘Wings of Desire’, which released three years later. The band ‘Nick Cave and the Bad Seeds’ also appeared playing a small cameo in the film.
In 1988, he authored his first book, ‘King Ink’ which in fact is an assortment of plays, lyrics and his collaborations with Lydia Lunch. The following year, he released another novel, ‘And the Ass Saw the Angel’.
In addition to his work with the band, he also gave solo performances through the 1990s as a vocalist and pianist. In 1991, he was seen acting opposite Brad Pitt in ‘Johnny Suede’.
His songs also appeared on a number of blockbusters films including ‘Batman Forever’, ‘The X-Files’, ‘Dumb and Dumber’, ‘Scream’ and its sequels, and ‘Hellboy’.
In 1996 he released the album ‘Murder Ballads’, which featured the hit single, ‘Where the Wild Roses Grow’.
He recorded a cover of ‘The Beatles’, ‘Let it be’ for the film, ‘I Am Sam’, in 2001 and also recorded the song, ‘To Be By Your Side’ for the documentary, ‘Le Peuple Migrateur’.
Continue Reading Below
In 2004, he wrote the screenplay for the film, ‘The Proposition’, which premiered the following year. Two years later, he starred in the film adaptation of ‘The Assassination of Jesse James by the Coward Robert Ford’.
In 2007, he formed the band ‘Grinderman’ and released their debut self-titled album, ‘Grinderman’, which was a side project. The following year, he released ‘Dig, Lazarus, Dig!!!’ with his band, ‘Nick Cave and the Bad Seeds’.
His next novel, ‘The Death of Bunny Munro’ was published on September 8, 2009 and is based on the life of a sex-addict salesman.
In 2011, Cave and Ellis composed music for ‘Dias de Gracias’, a Mexican film. The same year, they provided the score for ‘Lawless’, which was released the subsequent year around the world.
‘Push the Sky Away’, a studio album by ‘Nick Cave and the Bad Seeds’ was released on February 18, 2013 around the world. It features the singles, ‘We No Who U R’, ‘Mermaids’ and ‘Jubilee Street’. 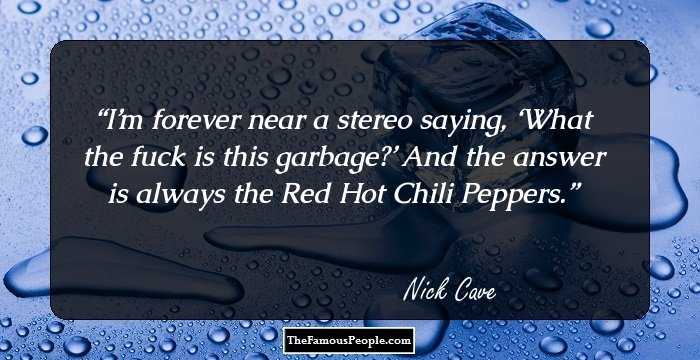 Major Works
‘Murder Ballads’, released in 1996 by ‘Nick Cave and the Bad Seeds’, is considered one of the best albums of the band till date. The album comprises of ballads in the alternative rock genre and has received two prestigious ARIA Awards the year it was released. This album was their biggest commercial success till date and Cave was also nominated for ‘best male artist’ for that year.
Awards & Achievements
In 1990, Time Out Magazine presented Cave with the ‘Book of the Year’ award for ‘And the Ass Saw the Angel’.
In 1997, he won the APRA Music Award for ‘Best Songwriter of the Year’.
Continue Reading Below
He won the Gucci Award for the script for the film, ‘The Proposition’, during the Venice Film Festival, in 2006.
He was inducted into the ARIA Hall of Fame, in 2007.
In 2008, he won the ARIA Award for ‘Best Male Artist of the Year’ for ‘Dig, Lazarus, Dig!!!’.
In 2012, he was honored with the Doctor of Letters from the University of Brighton.
In 2013, he was ranked one of the ’50 best-dressed over 50s’ celebrities by the ‘Guardian’. 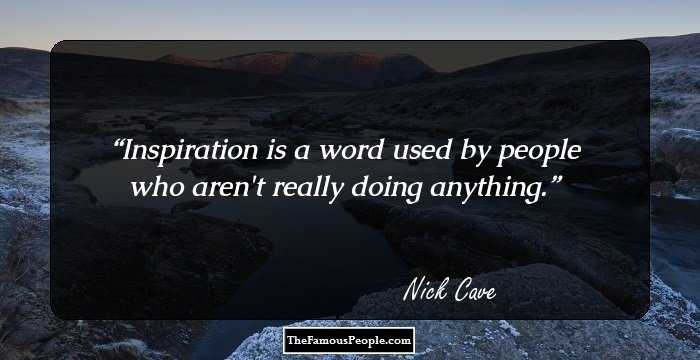 Personal Life & Legacy
He was involved in a romantic relationship with Anita Lane from in the 1970s to the 1980s.
He had a son with Viviane Carneiro in 1991. He remained married for six years and filed for divorce in 1996. Meanwhile, he fathered an illegitimate son Jethro born in 1991 to Beau Lazenby.
He then dated P J Harvey before he met Susie Bick in 1997. He married Bick in 1999. The couple has been blessed with twin sons, Arthur and Earl.
He currently lives in Brighton, England.
Trivia
One of the most famous images of this famous Australian musician is by Howard Arkley. Today the portrait hangs in the National Portrait Gallery.
Recommended Lists:
Rock Musicians #18
Musicians #554
Singers #823
Lyricists & Songwriters #268

See the events in life of Nick Cave in Chronological Order