Advanced Search
Murad IV was one of the mighty Sultans in the history of the Ottoman Empire who was best known for his imperious and authoritative rule including use of brutal methods to restore law and order of the state. The son of Sultan Ahmed I and Kösem Sultan, he succeeded his uncle, Mustafa I, to the throne at just 11 years of age through palace conspiracy. Although the early reign of Murad IV was administered through the regency of Kösem Sultan and a number of grand viziers, the actual power was exercised by unruly quasi-feudal cavalries known as spahis as also the Janissaries. Such period witnessed corruption of government officials, execution of several high officials, draining of treasury and overall lawlessness and rebelliousness. Effective rule of Murad IV saw him applying ferocity and ruthlessness to suppress the mutineers and gain complete control of his empire. He implemented strict rules including banning wine, coffee and tobacco among others and would execute violators or even suspects. He was the first Ottoman Sultan who executed a highest Muslim dignitary, shaykh al-islām, in the empire. The most notable accomplishment of his reign was recapturing of Baghdad and the Ottoman victory during Ottoman-Safavid War (1623–39). Mehmed V
26th July In History
DID WE MISS SOMEONE?
CLICK HERE AND TELL US
WE'LL MAKE SURE
THEY'RE HERE A.S.A.P
Quick Facts

Turkish People
Turkish Men
Turkish Emperors & Kings
Turkish Historical Personalities
Turkish Spiritual & Religious Leaders
Childhood & Early Life
Murad IV was born Murad bin Ahmed on July 26, 1612, in Constantinople, Ottoman Empire, to Sultan Ahmed I and his favourite consort, Kösem Sultan, who later became his legal wife.
Sultan Ahmed I ruled Ottoman Empire from 1603 until his death in 1617. His rule was notable for the construction of one of the most popular mosques of Turkey, the ‘Blue Mosque’; and for termination of the royal fratricide tradition of Ottoman Empire where rulers executed their brothers after ascending the throne.
Untimely death of Sultan Ahmed I and multiple princes eligible for the throne created confusion in selecting the successor. For the first time in the Ottoman history, a brother of a demised Ottoman Sultan succeeded the throne instead of a son.
Sultan Ahmed I’s younger and mentally disturbed brother, Mustafa I, was enthroned in 1617 as Murad IV’s brother Osman II was considered too young to be enthroned. However, support of a palace faction helped Osman II to ascend the throne in 1618. His rule ended on May 20, 1622, when he faced regicide leading eccentric Mustafa I to ascend the throne once again in 1622.
Continue Reading Below
Accession & Rule
While there was no improvement in mental state of Mustafa I, palace conspiracy amidst political instability and conflicts between several factions resulted into Murad IV’s accession. He succeeded Mustafa I to become the new Ottoman Sultan on September 10, 1623 at just 11 years of age.
The early years of his reign were marked by the regency of his mother. During this period he was controlled by his relatives while a general lawlessness and disorder prevailed much to the rising discontent of the people against the central government.
Much power was exercised by the turbulent spahis and the Janissaries, who plotted execution of high officials while the government was debilitating due to corrupt officials.
Iraq was invaded by the Safavid Empire in 1623 immediately after Murad IV took the throne. They were successful in recapturing Baghdad from the Ottomans. It was earlier conquered by Ottoman Sultan Suleiman the Magnificent in 1534.
Meanwhile in 1626, an alliance was considered by Mughal Emperor Jahangir between the Mughals, Ottomans and Uzbeks to combat the Safavids, but this plan couldn’t take shape as he died in 1627. Later his son Mughal Emperor Shah Jahan was successful in materialising alliance with the Ottoman Empire.
Murad IV reportedly met Shah Jahan when the latter encamped in Baghdad while gifts and weapons were exchanged between both the emperors.
Revolts spurted in Northern Anatolia. The Janissaries (the elite infantry units of the empire) rioted and broke into the palace in November 1631 and killed many including the Grand Vezir, the Grand Mufti and thirteen high officials. Murad IV was compelled to induct a Grand Vezir according to the choice of the Janissaries.
Afraid to meet the same fate as his brother Osman II, Murad IV took the authority in his own control asserting power to re-establish sovereignty of the Sultan. He acted quickly with fierceness and overpowered the tyrants executing the Grand Vezir he was forced to appoint.
He ordered strangulation of over 500 leaders who were behind the revolts. His spies went on a rummage to locate the traitors and their leaders all through Istanbul and executed them then and there. Around twenty thousand men were executed in Anatolia on the orders of Murad IV.
Continue Reading Below
He tried to check the rising corruption that had crept since the rule of his predecessors. During his absolute rule that began in 1632, he implemented several strict imperial policies and regulations with stringent punishments including execution for the lawbreakers and even suspects.
He banned coffee, alcohol and tobacco in Istanbul. He would keep vigil himself at the night wearing civilian clothes and behead the offenders himself on the spot to enforce implementation of his rules. According to different sources including historians like Halil İnalcık, Murad IV was a habitual drinker but he fiercely backed its prohibition.
His cruelty gradually became legendary as he executed people, particularly ladies on an impulse. Lust and hatred are the two feelings he developed for women, courtesy his mother who tried to engrain a feeling of detest in him for women.
The most notable achievement during his reign was the decisive victory of the Ottomans against Persia in the famous Ottoman-Safavid War (1623–39). It resulted in Ottomans re-capturing Baghdad apart from conquering Azerbaijan, and occupying Hamadan and Tabriz.
The last years of the war saw him as an excellent field commander commanding the Ottoman army on the war field. He remained the commander of the Ottoman army during the invasion of Mesopotamia that was irrevocably lost by the Persians to the Ottomans, who on the other hand, lost it as a result of the First World War.
The Ottoman-Safavid War ended with the ‘Treaty of Zuhab’ on May 17, 1639, which roughly outlined the borders of the two empires in accordance with the ‘Peace of Amasya’ (1555). Western Georgia and Western Armenia including entire Mesopotamia stayed with the Ottomans while Eastern Georgia, Eastern Armenia, Dagestan, and Azerbaijan stayed with the Persians.
The borders more or less laid the foundation of the present day borders between Iran and Turkey and Iraq.
His reign saw construction of several monuments including the Baghdad Kiosk, the Kavak Sarayı pavilion, the Revan Kiosk in Yerevan, the Şerafettin Mosque in Konya, the Bayram Pasha Dervish Lodge and the Meydanı Mosque among others.
Two Turkish architects, Ismail Effendi, and Isa Muhammad Effendi, who were part of the team that designed and constructed the Taj Mahal for Shah Jahan, were received by him as part of his exchange of ambassadors.
Personal Life & Legacy
Not much is known about his concubines except his consort, Ayşe Sultan, and a concubine named Sanavber Hatun. The name of Hatun was revealed from a 1628 vakf inscription.
He had many sons and daughters, but all his sons died as infants. Following his death in Istanbul due to cirrhosis on February 8, 1640, his insane brother Ibrahim took to the throne.

See the events in life of Murad IV in Chronological Order 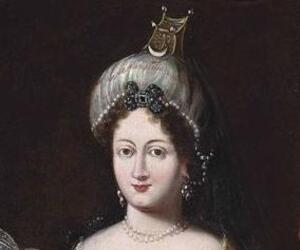