Milton Friedman was a well-known American economist and professor of statistics at the University of Chicago. He received the Nobel Memorial Prize in Economic Sciences. He has made his mark among other economists and scholars and is best known for his theoretical and empirical research work in consumption analysis, monetary history and theory for demonstrating the complexity of stabilization policy. He acted as an economic advisor to the U.S. President Ronald Reagan. His political philosophy that propagated the virtues of a free market economic system with little intervention by government is practiced by many governments. His works greatly influenced the research agenda. He also served as the leader of the Chicago school of economics under the University of Chicago. Milton Friedman's works include monographs, books, scholarly articles, papers, magazine columns, television programs, videos, and lectures. He wrote on a variety of topics on microeconomics, macroeconomics, economic history, and public policy issues. Originally a Keynesian supporter of the New Deal, he insisted on the government intervention in the economy. He then founded The Friedman Foundation for Educational Choice. The Economist called him "the most influential economist of the second half of the 20th century…possibly of all of it". He was a prolific writer, who apart from writing books, also contributed regularly to various magazines. His last column was published in ‘The Wall Street Journal’ a day after his death at the age of ninety-four. Founder/Co-Founder: The Foundation for Educational Choice

American Celebrities
American Men
Rutgers University
Columbia University
University Of Chicago
Childhood & Early Years
Milton Friedman was born on July 31, 1912 in Brooklyn, New York. His parents Jenő Saul Friedman and Sára Ethel (née Landau) were Jewish emigrants from Beregszász in Carpathian Ruthenia, Kingdom of Hungary (now Berehove in Ukraine). Friedman was the youngest of his parents’ four children.
When he was a year old, the family relocated to Rahway, New Jersey. There his mother opened a dry good shop and his father was variously employed. Although the family was financially weak they had enough to eat and the environment at home was always warm and supportive.
In 1928, Friedman graduated from Rahway High School. Unfortunately, his father had passed away by this time, resulting in worsening financial condition at home. It became clear that if he wanted to study further he would have to finance it himself.
Fortunately, he was awarded a competitive scholarship to Rutgers University. Financing rest of the expenses by doing odd jobs, he earned his B.A. degree in 1932, majoring in mathematics and economics.
Subsequently, he joined the University of Chicago with a scholarship in economics and earned his M.A. degree in 1933. He then received a fellowship at Columbia University and spent the 1933-1934 studying statistics with Harold Hotelling.
On returning to Chicago, he spent the 1934-1935 academic year working as a research assistant for Henry Schultz. However, his economic condition demanded that he should immediately get a job. 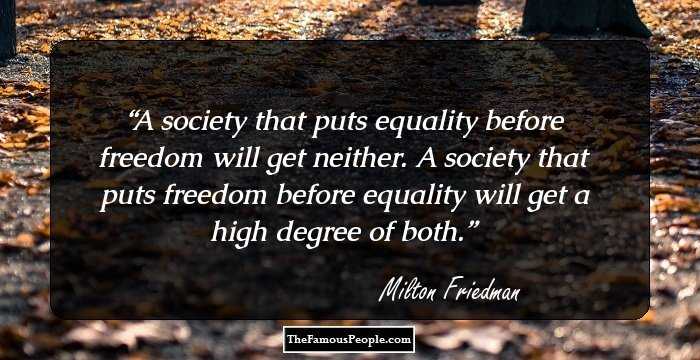 Quotes: Will
Continue Reading Below
In Public Service
In 1935, unable to get a job in the academic field, Friedman moved to Washington and started working for the National Resources Committee. Here he worked on a large consumer budget survey, a work that culminated in his 1957 book, ‘Theory of the Consumption Function’.
Next in autumn of 1937, he moved to National Bureau of Economic Research. Here he was appointed as an assistant to Simon Kuznets and started working with him on professional income.
In 1940, he received appointment as an assistant professor at the University of Wisconsin–Madison. Unfortunately, anti Semitic environment at the university as well as political difference with the faculty forced him to leave.
Subsequently in 1941, he joined the US Treasury Department as an advisor. Here he mostly worked on wartime tax policies and advocated Keynesian policy of taxation. 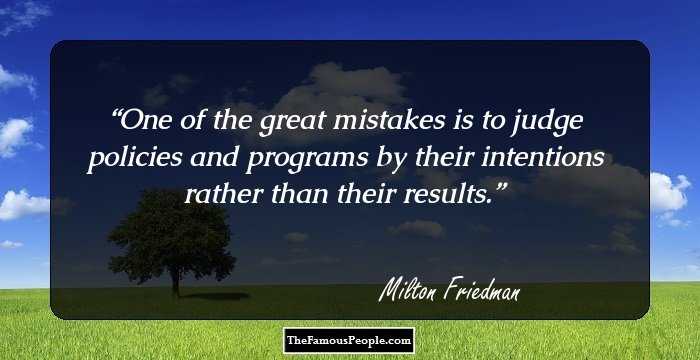 Academic Career
In 1943, Friedman joined the Division of War Research at Columbia University as a mathematical statistician. He remained here until the end of the Second World War. His work during this period focused mainly on problems concerning weapons design and military tactics.
Subsequently he spent the year 1945-1946 as an associate professor at the University of Minnesota. Concurrently in 1945, he submitted ‘Incomes from Independent Professional Practice’ which he had jointly authored with Simon Kuznets, to the University of Columbia as his doctoral dissertation. He was awarded the degree in 1946.
In the same year, he joined the University of Chicago as an Associate Professor of Economic Theory. He remained with the university for thirty years and considered it to be his intellectual home.
In 1947, he attended the opening meeting of the Mont Pèlerin Society, an organization dedicated to the study and preservation of free societies. Inspired by the talks, he now became actively involved in the political process of the country.
Continue Reading Below
In 1948, he was promoted to the position of a full professor. In the same year, he was persuaded by the Director of Research at the National Bureau of Economic Research to rejoin the organization. Here he worked on the role of money in the business cycle.
Concurrently he maintained his academic position at the University of Chicago and taught courses in price theory and monetary economics. In 1950, he was appointed a consultant to the U.S. governmental agency administering the Marshall Plan. Here he worked on the Schuman Plan, which was the precursor of the common market.
In 1953, he established a Workshop on Money and Banking at the University of Chicago. It soon turned into an important forum for both faculty members and graduate students.
In 1954, he was invited to Gonville and Caius College, Cambridge as a Fulbright Visiting Fellow, where he spent the 1954-1955 academic year. This was in spite of the fact that his liberal views were deemed ‘extreme’ by Cambridge standard.
In 1957, he published his first major work, ‘Theory of the Consumption Function’. The work was started long ago in 1935, when he was working on large consumer budget at the National Resources Committee.
In 1962, Friedman was named the Paul Snowden Russell Distinguished Service Professor of Economics. In the same year, he published his seminal work, ‘Capitalism and Freedom’. The book, written in collaboration with his wife, Rose D. Friedman, established him as a great economist and successful policy maker.
Then in 1963, he published ‘Monetary History of the United States’, written in collaboration with Anna J. Schwartz. Till now he was known only within the academic fraternity; but these books made him a well-known figure outside the closed group.
Friedman as Public Figure
Although he continued to teach at the University of Chicago, from now on he was also drawn increasingly into the public arena. In 1964, he served as economic advisor to Senator Barry Goldwater, the Republican candidate for the presidential election.
Although Goldwater was defeated, the campaign helped Friedman’s ideas to reach a wider audience. Then from 1966, Friedman started writing a weekly column on current affairs for ‘Newsweek’ magazine and continued doing so till 1984.
Continue Reading Below
Later in 1968, he acted as the economic advisor to Richard Nixon during his campaign for presidential election. Once he was elected, Friedman was inducted into a committee set up to study the feasibility of returning to all-volunteer armed force. In 1973, it resulted in the abolition of the military draft.
Although he was greatly interested in public policy, Friedman consistently refused full-time government positions. Instead, he began to concentrate on promoting his public policy beliefs outside the government.
In 1975, during the military dictatorship of General Augusto Pinochet, Freidman made a six-day trip to Chile and gave a series of lectures on economics. In the face of severe criticism, he argued that only economic reforms and adoption of free market policy could bring back democracy to Chile.
Later in the same decade, he travelled to South Africa and Rhodesia, giving series of lectures. He also traveled to China and Iceland and everywhere he spoke on free market. 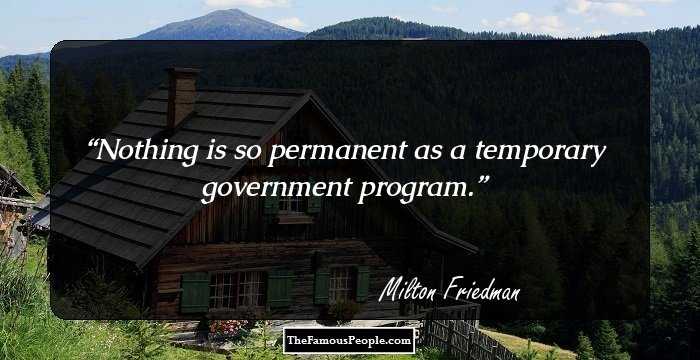 Later Life
Friedman retired from University of Chicago in 1977 and joined Hoover Institution on War, Revolution and Peace at Stanford University as a Senior Research Fellow, remaining there until his death in 2006. Simultaneously, he functioned as the visiting scholar at the Federal Reserve Bank of San Francisco.
Sometime in the late 1970s, he also worked on ‘Free to Choose’, a television program consisting of ten episodes in which he presented his economic and social philosophy. The first program appeared in January 1980. Since then, it has been shown in many foreign countries.
Also in 1980, Friedman served as an unofficial adviser to Ronald Reagan during the latter’s presidential campaign. Thereafter, he served on President Reagan's Economic Policy Advisory Board.
In 1983, he became the Paul Snowdon Russell Distinguished Service Professor Emeritus of Economics at the University of Chicago. He continued to write for various journals and appear on various television programs.
Major Works
‘Capitalism and Freedom’ is believed to be Freidman’s most significant work. The book has been translated into eighteen languages and has sold over half a million copy since its first publication in 1962. In it, Freidman had established that economic freedom is a precondition of political freedom.
Awards & Achievements
In 1976, Friedman received the Sveriges Riksbank Prize in Economic Sciences in Memory of Alfred Nobel for his "contributions to consumption analysis and to monetary history and theory, including observations of the complexity of stabilization policy".
Besides, he also received John Bates Clark Medal (1951), National Medal of Science (1988) and Presidential Medal of Freedom (1988).
Personal Life & Legacy
In 1932, while studying at Chicago University, Friedman met Rose Director, a shy but brilliant student at the same department. They got married six years later in 1938. She was also a free market economist and they frequently collaborated with each other professionally.
The couple had two children; Janet and David Friedman. David grew up to be a famous economist, legal scholar, and libertarian theorist, best known for his 1973 book ‘The Machinery of Freedom’.
Friedman died in San Francisco from heart failureon November 16, 2006. Although he was 94 years old at the time of his death he was still active in research work and contributed regularly to various journals.
Milton and Rose D. Friedman Foundation, which he had cofounded with his wife in 1996 continues to bear his legacy.

Quotes By Milton Friedman | Quote Of The Day | Top 100 Quotes

See the events in life of Milton Friedman in Chronological Order