Milton Avery was an American modernist painter, best known for his innovative and colorful landscape paintings. Born into a working-class family, Milton was subjected to work from an early age to financially support his family. He began working in his teen years and worked for several years at multiple blue-collar jobs. At the age of 20, he joined an art class that facilitated his interest in the field. He learned to draw and found an alternate career option, which did not generate income for him for several years. He moved to New York in the mid-1920s and attending art galleries there further motivated him to paint without any substantial gain. Meeting Paul Rosenberg at the height of the Second World War was the key turning point in his career. In 1944, he had a solo exhibition of his work at the Phillips Collections in Washington D.C. He thus became a known modernist painter in the New York artistic circles. However, the success didn’t last very long. After suffering a heart attack in 1949, his stars began to fade. He kept painting but his style of painting was considered outdated following the arrival of American expressionist painters on the scene. However, he kept painting until his death and found great respect among the art community following his demise in 1965. Milton Avery was born Milton Clark Avery, on March 7, 1885, in Altmar, New York. Born and raised into a working-class family, Milton’s family struggled to make the ends meet while he was growing up. His father was a tanner, who supported a family of six, with four children including Milton.

Growing up in a low-income household, Milton had no other option but to work in order to support his family. He had no inclination to become an artist when he was young. When he was 13, he moved to Connecticut with his family. He engaged in multiple blue-collar jobs to bring food to the table.

At the age of 16, he joined the Hartford Machine and Screw Company as a worker by the time he was 30 years old, he was the only one supporting a family of 11. During his entire adulthood, he worked as an assembler, leatherman and mechanic without any exposure to the world of art.

While he had taken up a course in drawing in his early 20s, he was still far away from even thinking of building a career in making paintings. He was burdened with the pressure to earn bread and butter for his family and painting remained just a side hobby for him for many years.

While labouring at a factory, he heard about a lettering class conducted by the Connecticut League of Art Students. He had no will to become a painter. He just joined the classes as it offered him a little more comfortable way to make money. However, to his bad luck, he didn't find a place in the classes and the programme was shut down after a month. But somehow, he found an acquaintance in Charles Flagg, the founder of the league who motivated Milton. He thus began attending drawing classes at night and laboured at the factory during the day.

His work began getting noticed at some local competitions and now he could think of art as a good career option. 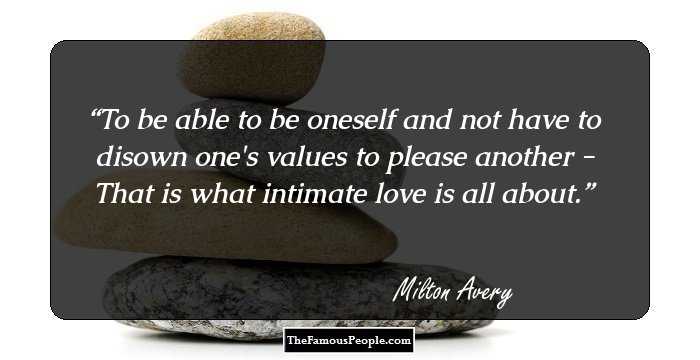 After receiving training from the School of the Art Society of Hartford, Milton became more interested in doing arts as a full-time occupation. He began seeking similar minded people. In the mid-20s, he moved to New York while following a young painter named Sally, whom he later married.

His painting style was more academic by this point. In New York, he was finally exposed to the style of painting he could later come to embrace as his own. He began attending art galleries and was introduced to the abstract world of modern art. In 1927, he visited the Valentine Gallery, which was holding a retrospective of artist Matisse’s work. Inspired by it all, Milton began experimenting with styles and consecutively, developed a style that looked like a combination of Matisse and Picasso’s work.

While his wife supported him financially, Milton spent all his time making paintings. In the early 1930s, the couple struggled through a hard time financially. Avery tried to bring his work into the limelight and exhibited his work to a lot of patrons and galleries, but nothing worked out for him.

However, his tiny New York apartment became a meeting spot for the young painters from the city. In order to support his family, he also began giving sketching classes. All this while, he kept visiting art exhibitions and continued painting people, landscapes, interiors etc and developed his own artistic voice.

The big turning point in his life came in 1943 when he met Paul Rosenberg, a rich and famous art dealer. He was forced to flee Paris during the Nazi occupation of France. In 1944, this friendship led to Avery’s exhibition at the Philips Memorial Gallery, which became a turning point in his life. Avery shot to nationwide fame. But despite that, he was still away from the riches and fame that most of his contemporaries enjoyed.

Critical acclaim helped him gain standing among the American artistic community. Famous critic Hilton Kramer was in awe of his use of colours and dubbed him the ‘American Fauve’.

Despite this appreciation, Avery kept trying and improving himself. In 1946, he visited Mexico and painted some of his most acclaimed works there. He organized more exhibitions of his work and by the end of the decade, he was known as one of the best known modernist painters in the New York art community.

Some of his greatest works are Man Fishing, Spring Orchard, Gray Sea, Flight and Dark Dune etc. His work can be found in art galleries across the USA, and across multiple cities.

In 1949, he suffered a heart attack which led to a downward spiral in his career. Paul Rosenberg severed all his personal and professional ties with Avery. He also sold the last stock of 50 Avery paintings at a low price, leading his new work to get a very low asking price. American post-war Expressionism had also taken over the American art scene and hence, Avery’s style lost its relevance.

In reality, Avery never quite recovered from the heart attack and his legacy was considered to be gone for good. He got involved in print-making for some time. However, when he began painting again, he exhibited a whole new attitude towards art. The use of colours was bolder and the forms were acutely refined. However, he could not recapture the glory he enjoyed in the 1940s for that brief period of time.

However, following his demise, his work was rediscovered and his late paintings were recognized to be some of the greatest examples of American modernist art.

Milton Avery married a fellow artist Sally Michel, a young art student in 1926. The couple had a daughter named March Avery, who was born in 1932.

Avery suffered a heart attack in 1949, but he never quite recovered from that. He had another heart attack in 1960. On January 3, 1965, Avery passed away after a long illness. Following his demise, his wife, Sally, donated his personal documents to the Archives of American Art.

See the events in life of Milton Avery in Chronological Order