Advanced Search
Alex Grey is an artist whose works cover a diverse variety of art forms including painting, sculpture, visionary art, performance art, and installation art. His specialties are spiritual and visionary art for which he is famous all over the world. Grey is an unconventional personality and was always interested in controversial and morbid issues from childhood. As a child he was fascinated by the concept of death and used to collect dead insects which he buried in his backyard. His artistic bent of mind was also evident from his childhood and he was encouraged to draw by his graphic designer father. After studying fine arts in college he went to medical school where he spent five years in the anatomy department preparing cadavers for dissection; his anatomical training greatly influenced his paintings. He was also greatly interested in existentialism and experimented with drugs in order to induce mystical experiences. He is famous for his ‘x-ray’ style of painting and his works of art often present the stages of developing psyche. He has the unique skill of portraying clairvoyant visions and psychedelic themes in his works. His works explore the physical, metaphysical and spiritual anatomy of the human life experiences in a blend of visionary and postmodern art. Zeena Schreck
DID WE MISS SOMEONE?
CLICK HERE AND TELL US
WE'LL MAKE SURE
THEY'RE HERE A.S.A.P
Quick Facts

Notable Alumni: School Of The Museum Of Fine Arts

American People
American Men
American Artists
American Artists & Painters
Male Artists & Painters
Childhood & Early Life
He was born as Alex Velzy into a middle class family. His father was a graphic designer who encouraged his son’s drawing abilities.
He became interested in the concept of death. He would collect dead animals and insects and give them a ritualistic burial in his backyard.
He won a scholarship to attend the Columbus College of Art and Design in 1971. He dropped out in 1973 and painted billboards in Ohio for a year.
He went to the School of the Museum of Fine Arts in Boston to study with the conceptual artist Jay Jaroslav for one year (1974-75). He met his wife Allyson Rymland there and the two would experiment with LSD to induce mystical experiences.
He then went to Harvard Medical School where he worked in the Anatomy department for five years studying the corpses and preparing them for dissection. His experience at the medical school greatly influenced his artworks. 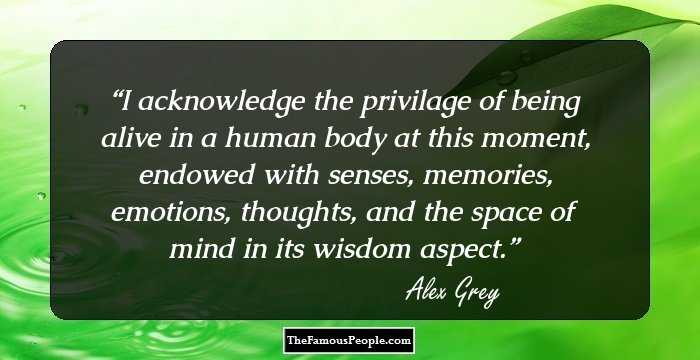 Quotes: I
Continue Reading Below
Career
He began working as a research technologist at Harvard’s department of Mind/Body Medicine under Dr. Herbert Benson and Dr. Joan Borysenko during the 1970s. He conducted experiments in subtle healing energies.
He started working on a series of art actions in 1972 that depicted rites of passage by presenting stages of a developing psyche. He conducted around 50 performance rites over a period of 30 years.
He began working on a series of 21 life-sized paintings known as the Sacred Mirror series in 1979. He used an ‘x-ray’ style of painting ,which depicted the material, mental and spiritual aspects of human life. It took him 10 years to complete the series.
He was invited to do illustration work for medical journals after doctors saw his ‘Sacred Mirrors’ paintings. He served as an instructor in Artistic Anatomy and Figure Sculpture at the New York University for ten years.
His first monograph, ‘Sacred Mirrors: The Visionary Art of Alex Grey’ was published in 1990. The book takes the viewer on a journey through the physical and spiritual self through pictures and essays.
He published a philosophical work, ‘The Mission of Art’ in 1998 in which he traced the evolution of human consciousness through the history of art. He explores the spiritual path of an artist through creative processes.
During the late 1990s Alex and his wife created the Foundation for the Chapel of Sacred Mirrors, Ltd., a non-profit organization that propounded the idea that positive transformation of individuals and societies can be brought about through art.
His book ‘Net of Being’ was released in 2012. It highlights the evolution of the artist’s works through the reproductions and photographs of his artwork.
He along with his wife now teaches courses in Visionary Art at The Open Center in New York City and the California Institute of Integral Studies and the Omega Institute.
Today, he sells his paintings, prints, books, posters, DVDs, calendars, clothing, jewelry, and many other items through his various web sites. 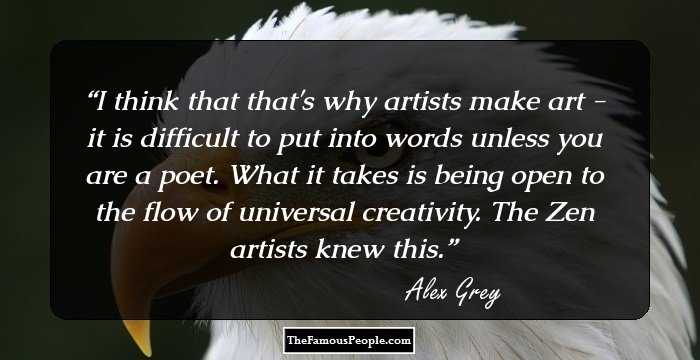 Quotes: Art
Major Works
He is best known for the ‘Sacred Mirror’ series which consist of 21 life-sized paintings that take the viewers on an inward journey into their own divine nature by exploring in detail the body, mind and spirit. The series present the cosmic, biological and technological evolution of the individual.
Awards & Achievements
His book ‘Net of Being’ won the Silver Nautilus Award in 2013 for its contribution to spiritual growth, green values and positive social change, as well as to the worlds of art and creativity. 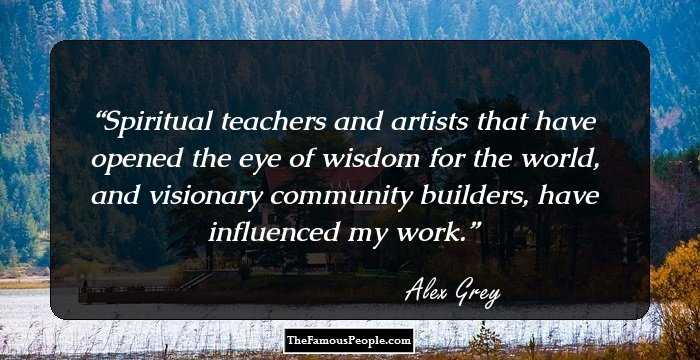 Personal Life & Legacy
He is married to painter Allyson Grey. Their daughter Zena Grey is an established actress and artist.
Trivia
Several of his paintings have been used by music groups on their album covers.

See the events in life of Alex Grey in Chronological Order