Advanced Search
Zeena Schreck is an American performer, visual artist, author, photographer, and the founder and the current spiritual leader of the Sethian Liberation Movement (SLM). Presently residing in Berlin, she uses the mononym ‘Zeena’ for her artistic pursuits. Her parents were the co-founders of the Church of Satan and she grew up under constant media glare in the 1960s and 1970s. Her artistic gifts were recognized early in her life and multiple teachers helped her polish that treasure trove of raw talent. In the 1980s, with the advent of the moral panic surrounding satanic ritual abuse, Schreck reluctantly became the church’s spokesperson. She served in the same capacity until 1990 and then she resigned from the church. Subsequently, she adopted Tibetan Tantric Buddhism and later embraced the ancient religious practice of worshipping the Egyptian god Seth. Her personal philosophy has evolved over the course of years, effectively changing her aesthetic sensibilities as well. As an artist, she is a devoted follower of the tradition that imbues mysticism and magic into creativity. She has written books, released albums, both as a solo artist and part of the group Radio Werewolf, made documentaries, and has an extensive body of work as an illustrator, graphic designer, and photographer. After 24-year hiatus from musical performances, Schreck made her return in 2013 at the Wave-Gotik-Treffen music festival. American People
Women Artists
American Artists
Women Artists & Painters
American Artists & Painters
Childhood & Early Life
Schreck was born Zeena Galatea LaVey on November 19, 1963, in San Francisco, California, United States to Anton LaVey and Diane Hegarty. She has two paternal step-siblings, Satan Xerxes Carnacki LaVey and Karla LaVey. On May 23, 1967, Schreck, who was three back then, underwent a very publicised Satanic baptism, which was performed by her father.
She received media attention from her childhood and regularly appeared in tabloid crime and men’s magazines due to her parent’s prominent coverage by the adult media. She was indoctrinated by the church and as a result, got regular death threats.
At 14, she gave birth to her son, Stanton Zaharoff LaVey. She would later call the environment she grew up in "a stifling, dysfunctional family life."
As a youth, Schreck was trained in theatre, drama, and film. An exemplary student, she finished school at the age of sixteen after passing the high school equivalency examination. She found a job and began studying drama at the City College of San Francisco.
She also enrolled at the Stella Adler Studio of Acting, where she received acting lessons from Eric Morris and Marcia Kimmell. She was instructed in Hellenic sacred drama, improvisation, and various branches of the Stanislavski 'system' and method acting.
According to Schreck, lineage is a quintessential vehicle for transferring metaphysical energy that guides her ritual art. She recognizes her godfather, filmmaker Kenneth Anger, as the source of her magical art, as it was Anger who introduced her to the works of Curtis Harrington, Jean Cocteau, and Maya Deren.
Continue Reading Below
Religious Activities
In the late 1970s, there emerged a colossal difference between popular culture and traditional American values. Many blamed Satanism for what they considered to be the downfall of moral values in the West. Initially, the Church of Satan didn’t actively do anything to refute that. In fact, they enjoyed the extra publicity. They were, after all, being portrayed as the greatest influence behind the simultaneous revolutions that were going on in the entertainment, fashion, and music industries at the time.
That drastically changed after a moral panic began to spread about Satanic ritual abuse. It began with the release of the now-discredited memoir of ‘Michelle Remembers’ in 1980, but it truly took shape of a public hysteria during the McMartin preschool trial. As her father was on a self-imposed exile from the public sphere, Schreck became the spokesperson for the church and made regular appearances on television programs or other public platforms to debate with Christian scholars.
In 1990, she eventually forswore LaVeyan Satanism and stepped down from her position in the church administration. In this period, she underwent a severe crisis regarding her faith. She later stated that she had never identified with the atheistic views of Satanism. Furthermore, her relationship with her father rapidly deteriorated after her departure. She also accused the church of character assassination. Schreck went to Europe and moved from cities to cities before settling in Berlin.
She ultimately found a sense of belonging when she converted to Tibetan Tantric Buddhism in the Drikung, Karma Kagyu and Nyingma lineages. Then, while living in Vienna, she saw the Sethian alter at a museum. She started practising the two faiths together and the amalgamation had a long-term effect on her art.
In 2002, she was chosen as the High Priestess of the Temple of Set. In the same year, she left the Temple of Set and established Storm, which would later be named The Sethian Liberation Movement.
Artistic Pursuits
To promote a mockumentary on Charles Manson, Schreck, along with her husband, organised the 8/8/88 Rally which gathered in Strand Theater in San Francisco. She addressed the crowd at the start of the rally and the recordings from her baptism were shown.
Between 1988 and 1993, she served as the co-director of the experimental musical project Radio Werewolf. She was their composer, vocalist, musician, and graphic designer and participated in their recordings of ‘The Lightning and the Sun’ (1989), ‘Bring Me The Head of Geraldo Rivera’ (1990), ‘Songs for the End of the World’, (1991), ‘Witchcraft/Boots (1991), ‘Love Conquers All’ (1992), and ‘The Vinyl Solution’ (2012). The last one was their first LP after a 20-year hiatus.
As a solo artist, she collaborated with musician Hisham Bharoocha (first percussion) at the Performa 13, New York on November 8, 2013. At the Wave-Gotik-Treffen music festival, two years later, she was accompanied by Cory Vielma and John Murphy.
She contributed to her husband’s book ‘The Manson File: Myth and Reality of an Outlaw Shaman’ and to George Petros’ ‘Art That Kills: A Panoramic Portrait of Aesthetic Terrorism 1984-2001’. She collaborated again with her husband to publish the book ‘Demons of the Flesh: The Complete Guide to Left Hand Path Sex Magic’. In 2015, Schreck published her autobiographical book ‘The Zaum of Zeena’.
As an illustrator and graphic designer, Schreck has made significant contributions to visual art forms. She has done the majority of artworks in the projects she has been part of and has also contributed to ‘The Exit Collection’ (1998) and ‘Kabbalah, Qliphoth and Goetic Magic’ (2004).
She debuted as a director with the documentary-art video ‘Germania: The Theory of Ruins’ (1992) and produced and directed ‘Ragnarök’ (1990) and ‘The Zurich Experiment’ (1992). Previously, she had produced her husband’s directorial venture ‘Charles Manson Superstar’ (1989). She has also made appearances in numerous other documentaries, including ‘The Wonderful World of Brother Buzz’ (1965), ‘The 80s: Satan's Seed Strikes Back’ (1989), and ‘Satan Lives’ (2015).
Personal Life
Zeena Schreck married Nikolas Schreck, fellow artist and musician, in 1988.
After she renounced Satanism and, by extension, her father, she chose to accept correspondence that addressed her as Zeena Schreck and not as Zeena LaVey or as Zeena LaVey-Schreck.
Trivia
Schreck played an anonymous lesbian in ’Usher’, a 2000 short film based on Edgar Allan Poe’s ‘The Fall of the House of Usher’.

See the events in life of Zeena Schreck in Chronological Order 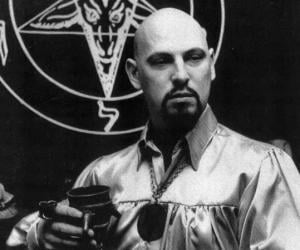