Advanced Search
Millard Fillmore was the 13th President of the United States who served from 1850 to 1853. He was the last Whig president and also the last president not to be affiliated with either the Democratic or Republican parties. At the beginning of his career Fillmore was associated with the democratic and libertarian Anti-Masonic Movement and Anti-Masonic Party. He was a protégé of the leading anti-Mason, Thurlow Weed, and when Weed left the anti-Masons, Fillmore too followed suit. Soon Weed became a prominent Whig organizer, and Fillmore again followed his mentor and joined the Whigs. A lawyer by profession, Fillmore served in the state legislature as a U.S. Representative. He went on to become the first New York State Comptroller elected by general ballot. He enjoyed great success as a politician, and was nominated by the Whig Party to run as vice president with presidential candidate Zachary Taylor in 1848. Taylor won the presidential election and Fillmore became the vice president. President Taylor died suddenly in 1850, plunging the nation into political chaos. Fillmore took over the reins as the president and attempted to restore political stability. He however proved to be an unpopular president and was not re-nominated for presidency by the Whig Party in 1852 American People
American Men
Male Leaders
Capricorn Leaders
American Leaders
Childhood & Early Life
Millard Fillmore was born on January 7, 1800, in Summerhill, New York, to Nathaniel Fillmore and Phoebe Millard. He was the second of nine children in a family of modest means.
He received little formal education as a young boy and was apprenticed to a cloth maker at the age of 14.
He desperately wanted to educate himself and embarked on a journey of self-education. He was finally able to attend New Hope Academy for six months in 1819. He then took up a job as a clerk and studied law under Judge Walter Wood.
He moved to Buffalo and continued his legal education in the law office of Asa Rice and Joseph Clary. He was admitted to the bar in 1823 and began practicing law in New York. 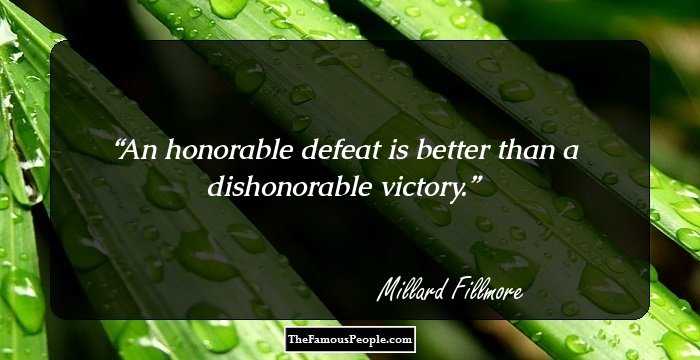 Continue Reading Below
Career
Fillmore forayed into politics in 1828 as a member of the democratic and libertarian Anti-Masonic Movement and Anti-Masonic Party. He was elected to the New York State Assembly where he served three one-year terms, from 1829 to 1831.
His political mentor, Thurlow Weed, left the Anti-Masons in 1832 and became a leading Whig organizer in New York. Fillmore followed in his mentor’s footsteps and left the Anti-Masons to join the Whigs.
He was elected to the U.S. House of Representatives in 1832 and served in the Congress from 1833 to 1835. He was re-elected twice and served from 1837 to 1843 and declined further re-nomination.
Meanwhile he had also formed a law partnership called ‘Fillmore and Hall’ with his friend Nathan K. Hall in 1834. The company grew to include another partner, Haven in 1836. The firm proved to be highly successful.
After leaving the Congress he ran as the Whig Party candidate for Governor of New York in the 1844 election but was unsuccessful. He helped to establish the University at Buffalo in 1846 and served as its first chancellor.
He was elected to the prestigious position of New York comptroller, or chief financial officer in 1847. He was the first New York State Comptroller elected by general ballot and in this position he revised New York's banking system.
The Whig Party nominated Fillmore—now a rising Whig politician—to run as vice president with presidential candidate Zachary Taylor in 1848. The Taylor-Fillmore ticket won following a bitterly fought election.
Millard Fillmore assumed office as the vice president on March 4, 1849. Taylor and Fillmore hailed from radically different backgrounds and political positions and did not get along with each other. As a result, Taylor excluded Fillmore from major discussions and relegated him to the role of President of the Senate.
President Taylor died after a short illness on July 9, 1850. The nation was shocked by his sudden death and being the vice president, Millard Fillmore took over the duties of the president the very same day. Following Taylor’s death, his entire cabinet resigned and Fillmore had to appoint others to fill the vacancies.
Fillmore was an anti-slavery moderate, even though he was personally opposed to slavery, he was not in favor of the abolitionist demands to exclude slavery from all the territory gained in the Mexican War. He supported the Compromise of 1850 and was in favor of the Fugitive Slave Act of 1850 which stated that federal government would aid in the capture and return of runaway slaves to their former owners. These measures made him increasingly unpopular among the Whigs.
As the end of his term approached, he announced his intention to run for the presidential election in 1852. By now he had fallen out of favor with the Whigs for signing the Fugitive Slave Act and was declined a re-nomination. He stepped down as the president on March 4, 1853.
The Whig Party disintegrated and he then joined the Know-Nothing party (also known as the American Party). He ran for a second non-consecutive term as a president in 1856 but lost the election following which he retired from politics.
Personal Life & Legacy
In 1819, he met and fell in love with Abigail Powers, a teacher at the New Hope Academy where he was a student. The couple dated for some years before tying the knot in 1826. They were blessed with two children.
Abigail died in 1853 and in 1858 Fillmore married Caroline McIntosh, a wealthy widow.
He died on March 8, 1874, after complications following a stroke. He was 74.

See the events in life of Millard Fillmore in Chronological Order