One of the rare artists to use the powerful medium of music to explore social and political issues, Michael Franti has proved to be a musician with a moral conscience. This gifted spoken word artist, composer, poet and political activist began his musical career with the industrial punk/spoken word band, ‘The Beatnigs'. He later formed the American industrial hip-hop band, ‘The Disposable Heroes of Hiphoprisy', a fiery group whose music explored political themes. Seeking further improvement and innovation, Franti founded the band ‘Spearhead'. He pushed boundaries with his music and became the pivotal force in hip-hop's renaissance, drawing from soul-driven beats and funk rhythms. With ‘Spearhead' he also explored new ideas and set on to a more provocative tone and style. Their debut album ‘Home’ received critical acclaim from music critics. Widely regarded as a master of contemporary protest music, Franti is an innovative songwriter, whose skilful songwriting abilities successfully blend flock, hip hop, punk, rock, and jazz. He also directed the documentary film, ‘I Know I'm Not Alone’, for which he captured raw footage from war zones in the Middle East. American People
African American Men
Rappers
Hip Hop Singers
Lyricists & Songwriters
Childhood & Early Life
Michael Franti was born on April 21, 1966 in Oakland, California, U.S, to an Irish-German-French ancestry mother and African-American father. His mother, fearing rejection from her family, set him up for adoption as soon as he was born.
He was adopted by Carole Wisti and Charles Franti, who already had three biological children and two adopted sons.
He studied in Edmonton, Alberta, until grade 9 and later moved to the Davis Senior High School. He graduated from the University of San Francisco, California.
While in school, he learnt the art of story writing from a priest whom he had met. Thereafter, he began writing poetry. He used a bass to create music inspired by hip hop, punk, and reggae, which was played on the campus radio. 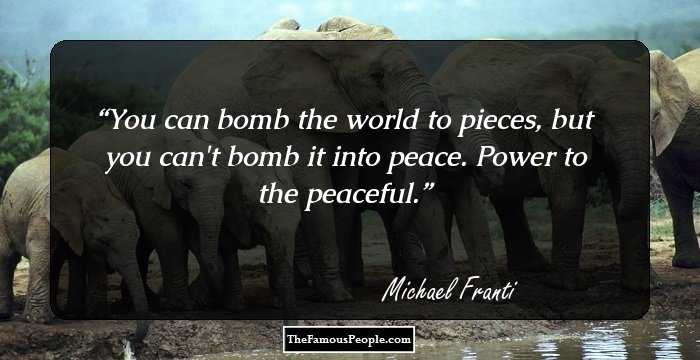 Quotes: You, Power, Peace
Continue Reading Below
You May Like

Famous Beautiful Women With Green Eyes
Career
In 1986, he set his foot into the world of music, beginning his musical career with the San Francisco based industrial punk/spoken word band, ‘The Beatnigs'.
In 1988, ‘The Beatnigs' released, ‘Television: The Drug of the Nation' under the Alternative Tentacles label. The band also came out with a self-titled album.
In 1990, along with his ‘The Beatnigs' band mate, RonoTse, he co-founded the American industrial hip-hop band, 'The Disposable Heroes of Hiphoprisy'.
On March 3, 1992, 'The Disposable Heroes of Hiphoprisy' came out with their debut album, ‘Hypocrisy Is the Greatest Luxury'. The album became critically acclaimed.
In 1994, he found a new band named ‘Spearhead' along with some studio musicians, which included, Carl Young. He soon announced the dissolution of the band, 'The Disposable Heroes of Hiphoprisy'.
On September 20, 1994, ‘Spearhead' came out with their debut album titled, 'Home'. The album was released under the Capitol Records label and included the single, 'Hole in the Bucket'.
In 1995, ‘Spearhead' worked with ‘Zap Mama’ to create the soundtrack 'To My Ba-Bay!' from the comedy film titled, 'Blue in the Face'. The film was directed by Wayne Wang and Paul Auster.
In 1997, ‘Spearhead' released its second studio album titled, 'Chocolate Supa Highway'. He was one of the vocalists for the album and also one of the producers.
In 2001, the band, ‘Spearhead' came out with their third studio album titled, ‘Stay Human', an album in which he donned several hats. Not only did he produce the album, but also delivered vocals, did programming and played the guitar.
Continue Reading Below
In 2003, the fourth studio album of the band titled 'Everyone Deserves Music' was released. The album featured the famous protest song, 'Bomb the World'.
In 2005, he worked with various others artists on the tribute album titled, ‘Look at All the Love We Found', which was dedicated to the band, ‘Sublime’. He worked on the track, ‘What I Got'.
Released in 2006, ‘Spearhead's fifth studio album, ‘Yell Fire!' was a politically charged album. The album was inspired by his trips to the Middle East, Iraq, Israel and Palestine.
In 2008, ‘Spearhead' came out with its sixth studio album titled, 'All Rebel Rockers', which remains the most successful album of the band. The album featured the hit single, ‘Say Hey (I Love You)'.
In January 8, 2008, he worked on the soundtrack album, ‘And All the Pieces Matter - Five Years of Music from The Wire', which was a soundtrack for the HBO TV show, ‘The Wire'.
In 2010, he was seen in the music feature documentary titled, ‘Sounds Like a Revolution'. The documentary was directed by Summer Love & Jane Michener.
On September 21, 2010 ‘Spearhead' released its seventh studio album titled, 'The Sound of Sunshine'. The album received mixed reviews from music critics.
In 2012, he became a part of the judging panel of the 11th annual Independent Music Awards. He assisted many independent musicians with their careers.
In 2013, his single titled. ‘I'm Alive (Life Sounds Like)’ was seen on ‘The Sims 4’ and ‘Rayman Legends’ games. He is reportedly working on an upcoming album titled, 'All People'. 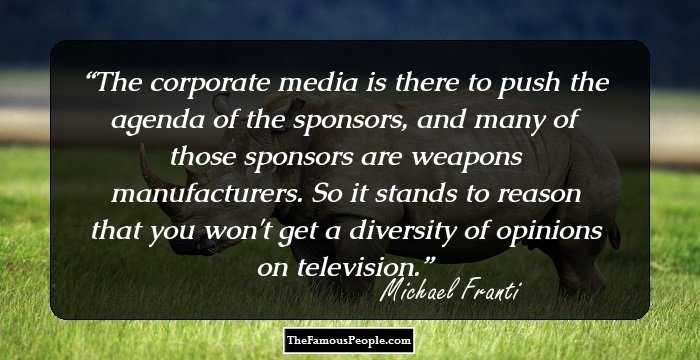 Quotes: You
Major Works
The ‘Spearhead' album ‘Yell Fire!' peaked at the number one position on the Billboard Top Heatseekers chart. The album also reached the sixth position on the Billboard Top Independent Albums chart.
Awards & Achievements
In 2001, he received the Domestic Human Rights Award, conferred by the Global Exchange, an international NGO based in San Francisco. The award was given for his efforts to end the war with the Middle East. 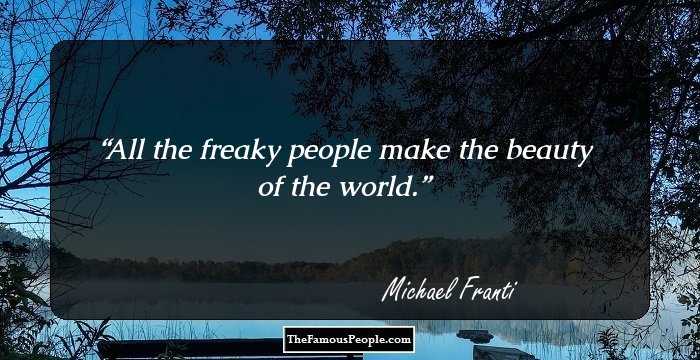 Personal Life & Legacy
He has always been a peace activist. He is also a dedicated advocate of peace in the Middle East for which, he made the documentary film. ‘I Know I'm Not Alone’, featuring the people affected by the war in the Middle East. He captured footage from war zones for the film.
He tied the nuptial knot with Tara Franti-Rye. He has two children, Ade and Cappy.
He is in a relationship with Sara Agah, an emergency room nurse and jewellery designer.
Trivia
In 2000, this American musician, composer and peace activist declared that he would never wear any footwear and chose to go barefoot, even on red carpet events! He only occasionally wears flip-flops as it’s required to board a plane or enter a restaurant.
Recommended Lists:
Musicians #2694
Singers #2945
You May Like

Quotes By Michael Franti | Quote Of The Day | Top 100 Quotes

See the events in life of Michael Franti in Chronological Order