(Cartoonist, Writer and Producer Known for His TV Series ‘The Simpsons’, ‘Futurama’ and ‘Disenchantment’)

Advanced Search
Matt Groening is a popular American cartoonist, animator, writer, producer and voice actor. He was an avid cartoonist from an early age but never seriously considered it as a career option; he wanted to become a writer. Later in life, while he was struggling to find employment, Matt Groening revived his old interest and began creating comic strips on the basis of his experiences. This was a turning point in his life and Matt Groening began publishing his own comic strips titled ‘Life in Hell’ in the newspaper. Later he went on to create some of the most popular cartoon series like ‘The Simpsons’, a show that earned the reputation of being the longest run American television series and ‘Futurama’. His work has been well appreciated and he has won many prestigious awards. Matt Groening has stated that many of the characters that he created have been named after his own family members. In the course of his career, he has also got the opportunity to play cameo roles in films and documentaries and to do voice acting. American People
Animators
Cartoonists
T V & Movie Producers
American Men
Childhood & Early Life
Matt Groening was born on 15 February 1954, at Portland, in Oregon, USA. His father, Homer Philip Groening, was a writer, filmmaker and advertiser and his mother, Margaret Ruth, was a teacher.
He grew up in Portland and did his schooling from the Ainsworth Elementary School and Lincoln High School. In 1972, he enrolled at the Evergreen State College in Olympia and studied there for five years.
During this time he was the editor of college paper ‘The Cooper Point Journal’. He used to write articles and draw cartoon illustrations for the journal. While at college, he befriended famous cartoonist Lynda Barry, whom he also regards as a great inspiration.
Matt Groening has stated that he was inspired to draw cartoons after watching the animation movie ‘One Hundred and One Dalmatians’. His other role model was cartoonist, Charles Monroe Schulz, who was known for his comic creation ‘Peanuts’. 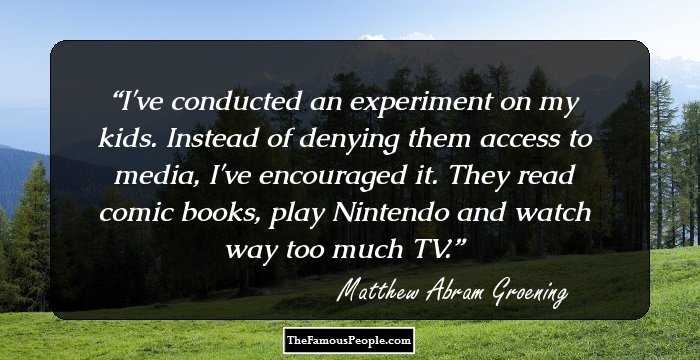 Quotes: Books
Continue Reading Below
Career
After graduation, Matt Groening moved to Los Angeles, in 1977, with the aim of becoming a writer. However, he began doing a series of odd jobs while at the city. It was at this time that he began drawing cartoons for his self-published book titled ‘Life in Hell’, which was based on his struggles and featured ‘Binky’ an oppressed rabbit. He first sold his comic to magazine ‘Wet’, in 1978.
Later, he got employed at an alternative newspaper Los Angeles Reader, and here with the support of his supervisor, Matt Groening was able to officially publish ‘Life in Hell’ as his first comic strip, in 1980. He was also given the responsibility of handling the paper’s music column for a short period. The comic strip ‘Life in Hell’ was a huge success.
In 1984, certain relationship themed strips from his work were published by co- worker Deborah Caplan, as a book titled’ Love in Hell’. The book became a success with over 20000 copies being sold in its initial two printings. Following this success, came his next work, ‘Work is Hell’, also published by Deborah Caplan.
The duo left the newspaper company and Matt Groening founded the Acme Features Syndicate that distributed ‘Life in Hell’. Life in Hell’ comic strips were published in over 250 weekly papers and they were later collated in a series of books titled: ‘School is Hell’, ‘Childhood is Hell’, ‘The Big Book of Hell’, and ‘The Huge Book of Hell’.
The strip continued to be published in the LA Weekly until 2009, when they were unable to pay Matt Groening anymore. Even to this date, it continues to appear in many other alternative newspapers.
Upon seeing his work in the comic strip, producer and writer, James L Brooks, expressed his interest to involve Matt Groening in the creation of an animated series to run on comedy series ‘The Tracy Ullman Show’. Matt Groening created a dysfunctional family and ‘The Simpsons’ aired on the show for the first time in 1987.
Beginning 1987, he worked in the ‘Traccy Ullman Show’ for two years as writer and animator. Though the ‘Tracy Ullman Show’ was soon cancelled, ‘The Simpsons’ had gained popularity and earned its exclusive half an hour spin-off series.
The Simpsons’ premiered in 1989 with him as creator, writer, voice actor and executive producer. ‘The Simpsons’ was mostly a satire aimed at politicians, teachers, police and other authorities. The show went on to become the longest running US primetime TV series and earn multiple awards. It is currently running in its 27th season.
In 1994, Matt Groening started the comic book publishing company named ‘Bongo Comics’. The company published comics related to ‘The Simpsons’ and “Futurama’. The following year he founded Zongo Comics to target mature comic readers.
Continue Reading Below
Post years of research in science fiction, in 1997, Matt Groening along with producer, David X Cohen, created an animated series project titled ‘Futurama’, about life in the year 3000. The show premiered under the Fox Broadcasting Company banner, in 1999. After four years the show was cancelled, however, it maintained a strong fan following.
While working on his animated series ‘Futurama’, he took up multiple roles like voice actor, creator, writer and executive producer of the show. He also made appearances in episodes of television series ‘The Pitts’, ‘Portlandia’ and ‘Space Ghost Coast to Coast’.
Matt Groening has made appearances in films and documentaries, such as, ‘Comic Book: The Movie’ (2004), ‘The Devil and Daniel Johnston’ (2005), ‘The Seventh Python’ (2008) and ‘I Know That Voice’ (2013).
He donned the role of an executive producer for animated films ‘Futurama: Bender's Game’ (2007), ‘Futurama: The Beast with a Billion Backs’ (2008), ‘Futurama: Bender's Game’ (2008), and ‘Futurama: Into the Wild Green Yonder’ (2009).
In 2012, a 3-D short film based on ‘The Simpsons’ was released with the title ‘The Longest Daycare’. Matt Groening was the writer and executive producer of this project. 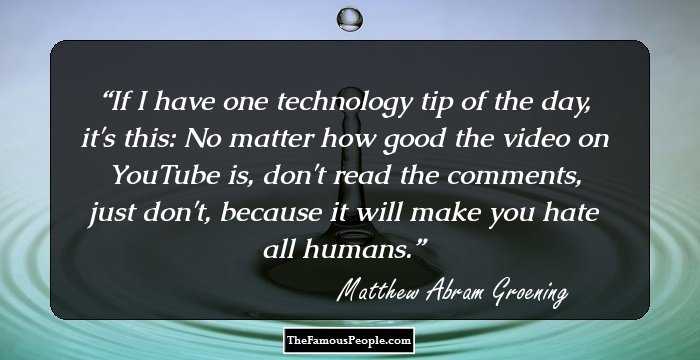 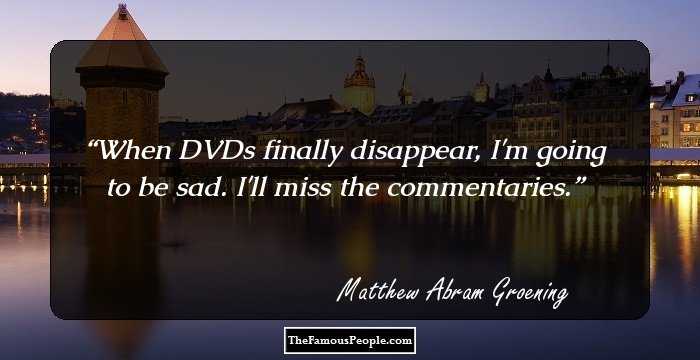 Personal Life & Legacy
Matt Groening married Deborah Caplan in 1986. The couple has two sons, Homer and Abe. Matt and Deborah separated in 1999.
In 2011, he married artist Augustina Picasso, with whom he had been in a relationship for four years. After marriage, he became step father to Augustina Picasso’s daughter Camille. In 2013, the couple had a son named Nathaniel Philip Picasso.

Quotes By Matt Groening | Quote Of The Day | Top 100 Quotes

See the events in life of Matt Groening in Chronological Order