Joe Ranft was an American ‘Academy Award’-nominated screenwriter, comedian, animator, voice actor, director, and magician. He is best known as one of the writers of ‘Toy Story’ and a co-director of the ‘Disney’ film ‘Cars.’ Joe was born in Pasadena, California, and was raised in Whittier. As a child, he became interested in magic, animation, films, and storytelling. He also enrolled into the character animation program at the ‘California Institute of Arts.’ In 1980, a student short film titled ‘Good Humor’ made by Joe caught the attention of ‘Disney,’ and he was offered a job in the company. During his first few years at the studio, he worked on multiple projects for ‘Disney.’ However, most of them never quite saw the light of the day. In 1987, ‘Disney’ released the animated feature film ‘The Brave Little Toaster.’ Apart from playing a voice role, Joe also worked as a screenwriter and as a directing animator for the film. Throughout his career at ‘Disney,’ Joe was involved in multiple projects, such as ‘Cars,’ ‘The Lion King,’ ‘Toy Story,’ ‘Beauty and the Beast,’ ‘Rolie Polie Olie,’ and ‘Monsters, Inc.’ On August 16, 2005, Joe lost his life in a horrific car accident. Seth MacFarlane
Continue Reading Below
DID WE MISS SOMEONE?
CLICK HERE AND TELL US
WE'LL MAKE SURE
THEY'RE HERE A.S.A.P
Quick Facts

American Celebrities
Screenwriters
American Men
California Institute Of The Arts
Male Voice Actors
Childhood & Early Life
Joe Ranft was born Joseph Henry Ranft, on March 13, 1960, in Pasadena, California. He grew up with his brother, Jerome Ranft, who later became a voice artist and a sculptor. The brothers worked together in several ‘Disney’ films.
Soon after Joe was born, the family moved to Whittier, South California, where Joe spent the rest of his childhood and adolescence. Ever since he was a kid, Joe exhibited a keen interest in magic tricks. He was also interested in playing the accordion and sketching. His parents were extremely supportive of his hobbies, which further encouraged Joe to pursue his passion.
Joe took art classes as a kid. He was mostly driven to his art classes by his parents. He got all the paints and art supplies he required to sketch. Soon, he started entering painting competitions and won his first award when he was in grammar school.
As he grew up further, Joe also developed an interest in comedy and voice acting. He would often entertain his friends in school by mimicking various characters from classic comedy films such as ‘Monty Python’ and the ‘Cheech & Chong’ movies. He also imitated cartoon characters from ‘Warner Bros.’ cartoons.
Following his graduation from ‘Monte Vista High School’ in 1978, Joe enrolled at the ‘California Institute of Arts.’ After the completion of the 2-year course in character animation, Joe’s student short animated film ‘Good Humor’ caught the attention of the people at ‘Disney,’ one of the biggest animation studios active in Hollywood. Joe was soon hired by ‘Disney.’
Continue Reading Below
You May Like

The Sexiest Men Of 2020, Ranked
Career
Joe formally joined ‘Disney’ in 1980, as a story-board artist and a writer. Joe spent his first 5 years with ‘Disney’ working on their animated TV programs. However, none of those shows made it to TV. In the mid-1980s, Joe was promoted to the feature films department, where he worked under legendary animator Eric Larson.
Under the tutelage of Eric, Joe grew as a talented writer and a voice artist, making his debut with the 1987 ‘Disney’ film ‘The Brave Little Toaster.’ Apart from performing the voice role of ‘Elmo St. Peters,’ Joe also worked as one of the directing animators and the screenwriter for the film. The film received critical acclaim and was a decent box-office success.
In 1988, the live action/animated film ‘Who Framed Roger Rabbit’ was released. Joe had worked as one of the story artists of the film. The film was praised for its highly innovative premise and was a major critical and commercial success.
Joe worked as one of the story sketch artists for the 1989 movie ‘The Little Mermaid.’ The film was yet another success for ‘Disney.’
In the early 1990s, Joe was involved in two big ‘Disney’ projects. One of them was ‘Aladdin’ and the other was ‘Beauty and the Beast.’ While he had a role in writing the stories of both the films, he also provided his voice to several characters of the films. Both the films became iconic ‘Disney’ ventures and contributed greatly to the ever-growing influence of ‘Disney’ on the American entertainment market.
In 1994, Joe served as one of the story writers for the ‘Disney’ film ‘The Lion King.’ The film was set in Africa and was influenced by William Shakespeare’s classic play ‘Hamlet.’ The film broke many records and became the highest-grossing animation film of all time. The film won two ‘Academy Awards’ and one ‘Golden Globe Award’ and is now considered a cult classic.
Joe moved away from ‘Disney’ for a while and worked with ‘Pixar Studios’ for their film ‘Toy Story.’ The film released in 1995. Apart from doing a voice role in the film, Joe also worked on it as a story writer and a story supervisor. The film was a mega success and won three ‘Academy Award’ nominations. It was also the first animated movie to be nominated for an ‘Academy Award’ in the writing category.
Joe took on voice roles for many films in the second half of the 1990s. His voice was featured in movies such as ‘Mulan,’ ‘A Night at the Roxbury,’ and ‘A Bug's Life.’
In 2001, Joe had yet another roaring success working as a story artist for the ‘Disney’ film ‘Monsters, Inc.’ He played a voice role in the film. The movie was yet another critical and commercial success.
Continue Reading Below
During the later part of his career, Joe focused solely on voice roles and voiced major characters in animated films such as ‘The Incredibles,’ ‘Corpse Bride,’ and ‘Robot.’
Before he died in an unfortunate car accident, he had worked on the screenplay of the ‘Disney’ film ‘Cars’ and had also voiced two characters in it. He had also co-directed the film, which later turned out to be a huge critical and commercial success.
Awards & Achievements
In 1996, Joe was nominated for the ‘Academy Award’ for the ‘Best Writing, Screenplay Written Directly for the Screen’ for ‘Toy Story,’ along with the screenwriting team of the movie.
He was also nominated for the ‘Primetime Emmy Award’ for ‘Outstanding Animated Program’ for the movie ‘The Brave Little Toaster’ in 1988, along with the production team of the film.
He won two ‘Annie Awards,’ one of them posthumously, and one ‘Awards Circuit Community Award’ for his work.
Family & Personal Life
Joe Ranft married Sue Barry in 1985. The couple had two children: a son, Jordan, and a daughter, Sophia.
On August 16, 2005, Joe was driving with two friends in Mendocino County, California. One of his friends was driving the car when the car crashed through a guard rail on Highway 1 and plunged 130 feet into the Navarro River. Joe died on the spot along with the driver, Elegba Earl. The third friend, Eric Frierson, got away with minor injuries.
Joe was in the middle of production of the film ‘Cars’ when he died. After his demise, esteemed animation artist Henry Selick hailed Joe as “the story giant of our generation.”
He was 45 years old at the time of his death. He is survived by his wife, his two children, and his brother, Jerome.
You May Like

See the events in life of Joe Ranft in Chronological Order 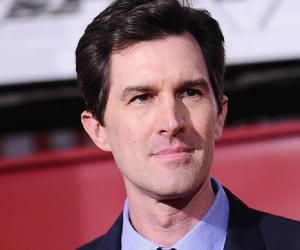