Mary, Queen of Scots was Queen of Scotland from 1542 to 1567. She was the daughter of King James V of Scotland and his second wife, Mary of Guise, and was the only surviving legitimate child of the king. The untimely death of her father when she was just six days old made her the Queen of Scots as a tiny infant. In the chaos following her father’s death, Mary’s great-uncle King Henry VIII of England made an effort to secure control of the throne of Scotland but his attempt was thwarted in a timely manner by Mary’s mother who acted as a regent on behalf of her daughter. Her mother, who was of French origin, fixed Mary’s marriage with Francis, the four-year-old heir to the French crown, and sent her to live in France where she was raised in the court of Francis’ father, French King Henry II. She soon married Francis and when her young husband ascended to the throne upon his father’s death, Mary became the queen consort of France. However, the untimely death of her husband left Mary a widow at the age of 18 and she returned to Scotland. Mary’s reign as the Queen of Scots was fraught with political difficulties and her unwise personal choices only complicated the issues. Francis II of F...
DID WE MISS SOMEONE?
CLICK HERE AND TELL US
WE'LL MAKE SURE
THEY'RE HERE A.S.A.P
Quick Facts

Also Known As: Mary Stuart, Mary I of Scotland

children: James VI and I

Scottish People
Scottish Empresses & Queens
Women Historical Personalities
Scottish Historical Personalities
Sagittarius Women
Childhood & Early Life
Mary was born on 8 December 1542 to the King of Scots, James V, and his French second wife, Mary of Guise. She was the only legitimate surviving child of the king who was on his deathbed at the time of her birth. Mary was baptized at the nearby Church of St Michael shortly after she was born.
James V died on 14 December 1542 when Mary was just a few days old. Thus she became the Queen of Scots as an infant. It was decided that Scotland would be ruled by regents until Mary became an adult.
When Mary was six months old, she was betrothed to Prince Edward, the son of King Henry VIII of England. However, the engagement was eventually called off due to certain religious and political issues.
Since Mary’s mother was French, she readily agreed when the French king, Henry II proposed that Mary be married to his son, the Dauphin Francis. Following the betrothal, Mary was sent to live in the French court under the care of her father-in-law. Mary and Francis reportedly developed a close bond from the day they met.
Mary received a good upbringing in France and was trained in horsemanship, falconry and needlework. She also learned French, Italian, Latin, Spanish, and Greek, and was competent in prose and poetry.
She married Francis in 1558. Her father-in-law, Henry II, died in 1559 and her 15 year old husband Francis ascended to the throne as the King Francis II and Mary, at 16, became his queen consort.
Francis II died of an ear infection on 5 December 1560 leaving Mary a widow at 18. Francis’ younger brother Charles inherited the throne and Mary returned to Scotland nine months after her husband’s death. 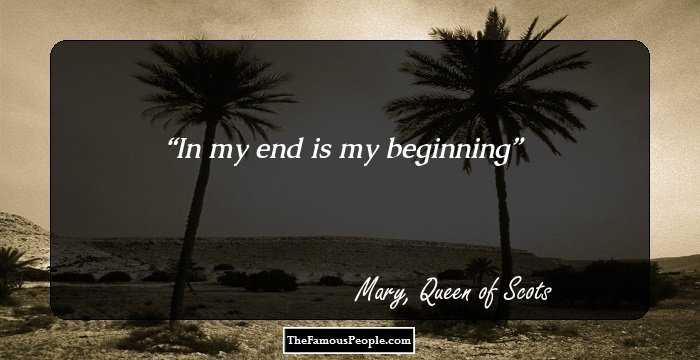 Continue Reading Below
Accession & Reign
She faced numerous challenges upon her return to Scotland in 1561. Having spent the major part of her early life in France, Mary was unaccustomed to life in Scotland.
At that time, Scotland was torn between Catholic and Protestant factions, and Mary’s illegitimate half-brother, the Earl of Moray, was a leader of the Protestants. Mary, as a devout Catholic, was regarded with suspicion by many of her Protestant subjects, and her tolerance towards Protestants disappointed the Catholics.
She fell in love with her English-born first cousin Henry Stuart, Lord Darnley and married him in 1565. This match was considered scandalous by both the Catholic and Protestant factions as Mary and Lord Darnley were first cousins. This marriage also turned her Protestant half-brother against her as Lord Darnley was also a Catholic.
The marriage ran into problems from the very beginning as Lord Darnley proved to be a mean and vicious man. In March 1566, Darnley, along with a group of Protestant nobles brutally murdered Mary's Italian secretary, David Rizzio, in front of Mary who was heavily pregnant at that time. Darnley suspected that his wife was having an affair with Rizzio.
Following this incidence, Mary’s marriage with Darnley broke down. When Darnley was found dead under mysterious circumstances in February 1567, murder was suspected, and Mary, along with James Hepburn, the Earl of Bothwell, Moray, Secretary Maitland, and the Earl of Morton came under suspicion.
Within three months of Darnley’s death, Mary married the main suspect in her husband's murder—James Hepburn, Earl of Bothwell. This marriage was considered outrageous and the public turned against her. In July 1567, Mary was compelled to abdicate the throne in favor of her infant son.
Mary was imprisoned in Lochleven Castle but managed to escape in 1568. She fled to England, seeking protection from her cousin, Elizabeth I. However, Elizabeth was suspicious of Mary’s intentions and had her imprisoned. 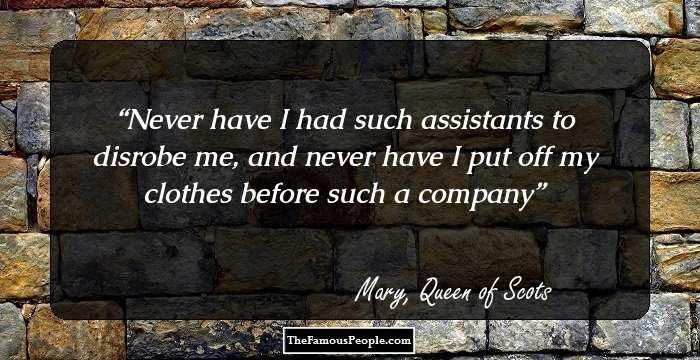 Quotes: Me, Never, I
Personal Life & Legacy
Mary’s first marriage was to Francis II of France which took place in 1558. It is not known whether the marriage was consummated or not as Francis II died very young, at the age of 16.
A few years after the death of Francis II, Mary married her first cousin Lord Darnley in 1565. This marriage was problematic from the very beginning though it produced one son, James VI and I. Darnley died under mysterious circumstances in 1567.
A few months after the death of Darnley, she married the prime suspect in his alleged murder, James Hepburn, Earl of Bothwell.
After being imprisoned by Elizabeth I, Mary was kept under strict surveillance. Her imprisonment would last for 19 long years.
In 1586, Mary corresponded with Anthony Babington who was plotting to depose Elizabeth. The letters fell into the hands of Elizabeth’s spymaster Francis Walsingham, and Elizabeth began to see Mary as a threat. Thus Mary was brought to trial, found guilty of treason, and sentenced to death.
Mary was executed by beheading in Fotheringhay Castle, Northamptonshire, on 8 February, 1587. She was 44 years old.

See the events in life of Mary, Queen Of Scots in Chronological Order