Advanced Search
James Maitland Stewart, also known as Jimmy Stewart to his fans, was an American film and stage actor whose portrayals of decent, naïve, idealistic and noble characters endeared him to millions of film lovers. A lanky actor with an ungainly stride and boyish mannerisms, he personified the typical middle-class American caught up in a confusing world. He had a distinctive voice and accent which his fans loved and impersonators loved to mimic. In a career spanning over half a century, he had acted in over 90 movies, many of which are considered classics. He was a major MGM contract star known for making collaborations with many of the famous directors of his times: Alfred Hitchcock, Frank Capra, John Ford, Anthony Mann, etc. His depiction of a naïve idealist in ‘Mr. Smith Goes to Washington’ earned him his first Academy Award nomination for Best Actor. His role as intrusive reporter in ‘The Philadelphia Story’ won him an Academy Award in a competitive category. Apart from being a movie star, Stewart was a highly-decorated war veteran, who served as a bomber pilot during World War II. He was eventually promoted to the rank of Brigadier General in the US Air Force Reserve. After the war, he returned to Hollywood with what would become his best known performance—as George Bailey in Frank Capra's ‘It's a Wonderful Life’. Though the movie generated mixed reviews upon its release, it went on to become a Christmas classic years later.

American Celebrities
Pennsylvania Actors
Princeton University
Taurus Actors
American Actors
Childhood & Early Life
James was born in Pennsylvania as the eldest child of Elizabeth Ruth and Alexander Maitland Stewart, a hardware store owner. He had two younger sisters. He was of Scottish and Irish ancestry.
As a child, he dreamt of getting into aviation but abandoned his dreams to attend Princeton University at his father’s insistence. He excelled in architecture, but gradually his interest shifted towards the school’s music and drama clubs, especially the Princeton's Triangle Club, the school's touring theater troupe.
After graduating form Princeton in 1932, he joined University Players, an intercollegiate summer stock company in Massachusetts, on Cape Cod. At University Players he met his future friends, Henry Fonda and Margaret Sullavan. 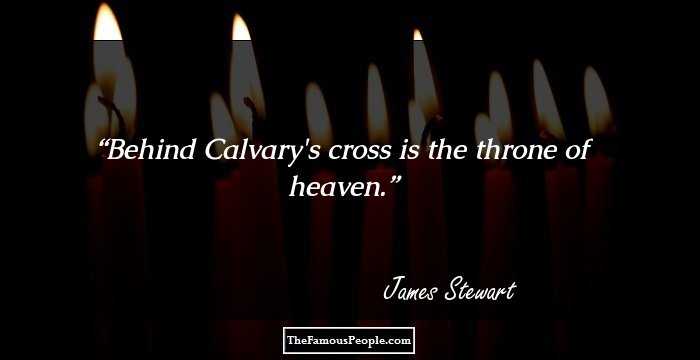 Continue Reading Below
Career
Stewart made his debut on a Broadway Comedy ‘Goodbye Again’ as a chauffeur. After getting more important stage roles, he was encouraged by Fonda to take a screen test after which he signed a contract with MGM for up to seven years.
He made his debut with the 1935 film ‘The Murder man’. In spite of the film’s box office failure, Stewart’s acting skills were appreciated. After a series of other small roles, he landed his first substantial role as David Graham in ‘After the Thin Man’ in 1936.
He got his first leading role in ‘Next Time We Love’ in 1936 at the insistence of his old friend Margaret Sullavan who played a big role in getting him established in his acting career.
The year 1938 marked the beginning of a successful partnership with director Frank Capra when Stewart starred in his movie ‘You Can’t Take it with You’.
He acted in the 1940 classic ‘The Philadelphia Story’ with Cary Grant and Katharine Hepburn, directed by George Cukor. In the same year, he acted in a series of screwball comedies.
Stewart was eager to serve in the army when World War II was about to begin. He was drafted into the US Army in 1940 but was rejected for failing to meet the height and weight requirements. He enlisted again in 1941 by persuading the enlistment officer to run new tests.
He was enlisted as a private but advanced to the rank of second lieutenant by January 1942. He was with the 703rd Bombardment Squadron in 1943, initially as a first officer and then as a captain.
By 1944, Stewart had been promoted to the rank of colonel, an honour only a few American soldiers have had—to rise from the rank of private to colonel within a four year span.
He played an active role in the US Air Force Reserve even after the war, and was subsequently promoted to the rank of Brigadier General in 1959.
Continue Reading Below
He finally retired from the Air Force in May, 1968 after 27 years of service. The then president Ronald Reagan promoted him to Major General on the retired list.
After the war, he returned to Hollywood with Frank Capra’s ‘It's a Wonderful Life’ in 1946. It was his first film in five years, and his final appearance in a Capra production.
His collaborations with director Anthony Mann helped redefine his career in the 1950’s. His first film with Mann, ‘Winchester '73’ became a huge box office hit. His other Mann westerns include ‘Bend of the River’ (1952), ‘The Naked Spur’ (1953), ‘The Far Country’ (1954) and ‘The Man from Laramie’ (1955).
Stewart’s collaborations with renowned director Alfred Hitchcock in the 1950’s also marked an important turning point in his career. He starred in four of Hitchcock’s films, including the 1954 hit ‘Rear Window’.
After getting the leading roles in three of John Ford’s films in the 1960’s, he starred in a series of less memorable films. During his later years, he made a transition from cinema to television, but was not particularly successful.
Major Works
Stewart’s role as an idealist in Frank Capra’s ‘Mr. Smith Goes to Washington’ in 1939 led to his first Academy Award nomination for Best Actor.
His role as a reporter in George Cukor’s 1940 romantic comedy ‘The Philadelphia Story’ is considered one of his finest performances as it won him the Academy Award for Best Actor.
He considered his first movie after the war, Capra’s ‘It's a Wonderful Life’ (1946) as his personal favorite. The movie was nominated for five Academy Awards.
He starred as an eccentric man with an invisible rabbit as a best friend in the 1950 film ‘Harvey’. The film received many Academy Award nominations.
Continue Reading Below
In the 1959 courtroom crime drama, ‘Anatomy of a Murder’, he played the role of Paul Biegler, a lawyer. The film was rated as one of the 12 best trial films of all time by the American Bar Association in 1989.
Awards & Achievements
He received the Academy Award for Lifetime Achievement in 1985 for “his fifty years of memorable performances, for his high ideals both on and off the screen, with respect and affection of his colleagues.”
With an acting career spanning over half a decade, Stewart had been the recipient of many awards, notably the Golden Globe Cecil B. DeMille Award in 1965 for “outstanding contributions to the world of entertainment” and The American Film Institute Life Achievement Award in 1980.
Stewart had an illustrious career in the US Air force as well and was awarded the Air Force Distinguished Service Medal for his “exceptionally meritorious service to the US Government in a duty of great responsibility.”
He received the Air Medal thrice during his military career for “meritorious achievement while participating in aerial flight.”
He was awarded the Presidential Medal of Freedom in 1985, the highest civilian honor in the United States.
Personal Life and Legacy
He had been linked with numerous actresses during his younger days and did not get married till the age of 41.
He married former model Gloria Hatrick McLean in 1949, and adopted her two sons from a previous marriage as his own. He had biological twin daughters with his wife.
He suffered from many ailments like skin cancer, heart disease and dementia during his later years.
Continue Reading Below
The Jimmy Stewart Museum, celebrating his life and career, and containing numerous artifacts and memorabilia related to him was opened in Pennysylvania in 1995.
He was devastated by the death of his wife in 1994 and died of a heart attack in July 1997, aged 89.
Trivia
He was named the third Greatest Male Star of All Time by the American Film Institute.
He was popularly known to his fans as “Jimmy” though he personally hated this nickname.
The word "Philadelphia" on the Academy Award that he received in 1941 for ‘The Philadelphia Story’ (1940) is misspelled.
He was the first major American movie star to wear a World War II uniform.
He was good at playing musical instruments, especially, the accordion.
He published a book of poetry titled ‘Jimmy Stewart and His Poems’ in 1989.

See the events in life of James Stewart in Chronological Order