Mary Helen MacKillop, better known as Sister Mary of the Cross, is remembered as a teacher, an educator, and innovator within the Catholic Church. She is the first, and only, Australian saint. Mary’s parents, both Scottish born, immigrated to Australia, where they met and married. Mary was the firstborn of eight children. She was dedicated to providing education to the poor, and her order, the Josephites, founded schools, orphanages, and nursing homes for the lower classes across Australia. She was well educated, having been tutored by her father, as well as attending private schools, and traveled widely for a woman of her day. Travels took her to Rome, throughout Europe, and across the length and breadth of Australia and New Zealand. Controversy was nothing new to her, and at one point of time she faced the risk of being excommunicated due to differences with her Bishop. Mary was much beloved by the sisters of her order, and she was known to be caring and fair in her dealings with them. Mary’s fragile health did not hold her back from fulfilling her calling, and her work was carried out even through poor health. At the time of her death, she held the position of Superior General within her order Benedict of Nursia
Saints #230
Spiritual & Religious Leaders #170
Miscellaneous #6679
DID WE MISS SOMEONE?
CLICK HERE AND TELL US
WE'LL MAKE SURE
THEY'RE HERE A.S.A.P
Quick Facts

Australian Celebrities
Female Saints
Women Spiritual & Religious Leaders
Capricorn Women
Childhood & Early Life
Mary was the eldest child of Scottish Catholic parents, Alexander MacKillop and Flora MacDonald. She was born on 15 January 1842 in the Fitzroy suburb of Victoria, which was then a British colony.
Mary attended private schools, and was tutored by her father. Alexander was a good father and husband, but did not provide well for the family. He was never able to make a success of the farm.
Much of the time the family was without their own home, and had to depend on relatives and friends for their food and shelter.
As the eldest of eight children, Mary had a lot of responsibility within her family. She went to work at age 14 as a clerk, and at 16 she began working as a governess to the children of her aunt and uncle, Alexander and Margaret Cameron, who lived in Penola, South Australia.
Two years later, in 1862, Mary accepted a teaching job in Portland, Victoria. Soon she opened a boarding school, ‘Bay View House Seminary for Young Ladies’. The remainder of her family joined her in Portland two years later. 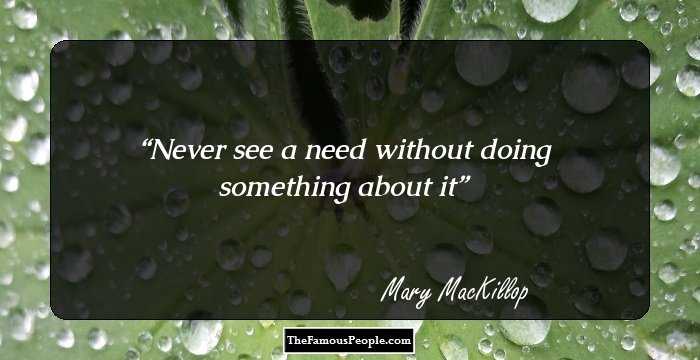 Quotes: Never, Need
Continue Reading Below
You May Like

Who Is The Most Popular BTS Member?
Later Life
Mary and her sisters, Annie and Lexie, were invited in 1866, by Father Julian Tenison Woods, to begin a school in Penola. A stable was renovated for the school, and more than 50 children attended there.
On November 21, 1866, Mary and several other women committed to the religious life. Mary, at the age of 25, took the name of Sister Mary of the Cross, and she and her sister Lexie began wearing the Catholic habit.
As a group, the young ladies called themselves ‘The Sisters of St. Joseph of the Sacred Heart’. They founded a new school, and dedicated themselves to educating poor children.
This school was the first Catholic institution to be founded by an Australian, man or woman.
The “Rule of Life” for the order included a vow of poverty, no ownership of personal belongings, faith that God would provide for their needs, and the readiness to go wherever needed. A plain brown habit was adopted, and the sisters became known as the ‘Josephites’. They soon acquired the nickname of the ‘Brown Joeys’.
In 1867, a school was opened in Yanalilla, South Australia. In two years’ time, there were 21 Josephite sisters educating children in 21 schools across the country. They also worked with the poor elderly, orphans, abandoned children, and operated a home for the incurably ill.
By 1871, there were more than 40 schools, homes, and missions established by 130 sisters of the Josephite order. These were located across Queensland and South Australia.
Due to the health of Bishop Sheil, there was no clear leadership for the diocese, which led to disunity. Local priests tried to discredit MacKillop by rumors of alcohol abuse, and financial incompetence.
Father Charles Horan sought to discredit the Josephites, and convinced Bishop Sheil to change the Josephites’ constitution. MacKillop did not agree, and, on September 21, 1871, Sheil excommunicated her for insubordination.
Continue Reading Below
In 1872, on his deathbed, Bishop Sheil lifted MacKillop’s excommunication, and a commission verified that she was completely restored to the Church.
The Josephites expanded to New Zealand and New South Wales. In March of 1875, Mary MacKillop was elected Superior General of her order.
In 1885, Pope Leo XIII declared the Josephites to be a canonical Congregation. Three years later, he gave the ‘Sisters of Saint Joseph of the Sacred Heart’ his approval.
Sister Mary MacKillop continued as Mother Superior General until her death, except for the period between 1897-99. Even though her final years were spent in a wheelchair, the nuns trusted her to run the order.
Major Works
Mary MacKillop founded the ‘The Sisters of St. Joseph of the Sacred Heart’, an order dedicated to education and caring for the poor. The Order was officially recognized in 1885 by Pope Leo XIII. Sister Mary through the Order worked for establishing schools, orphanages, and homes for the ill, across Australia, and New Zealand.
Awards & Achievements
Sister Mary MacKillop was elected as ‘Mother Superior General’ of the Josephite order in 1875. This was a ground-breaking achievement for a woman.
She was canonized by the Catholic Church on January 19, 1995, by Pope John Paul II, citing her “heroic virtue”.
Personal Life & Legacy
Sister Mary died on August 8, 1909, in a Josephite convent. She suffered from rheumatism and had a stroke, causing paralysis.
She founded the ‘Josephit’e order. A shrine, the ‘Mary MacKillop Memorial Chapel’, is in Sydney, Australia.
You May Like

See the events in life of Mary MacKillop in Chronological Order 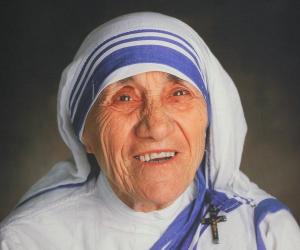