DID WE MISS SOMEONE?
CLICK HERE AND TELL US
WE'LL MAKE SURE
THEY'RE HERE A.S.A.P
Popularity Index
30
Spiritual & Religious Leaders #306
Leaders #2837
Quick Facts

Who was Gordon B. Hinckley?

Gordon Bitner Hinckley was a religious leader who served as the fifteenth and the oldest, president of ‘The Church of Jesus Christ of Latter-day Saints (LDS Church)’. As president of the church, he was considered by its members to be a prophet. His presidency was noted for building of temples, including a reconstruction of the historic Nauvoo Illinois Temple, the building of the 21,000 seat Conference Center, the issuance of the Proclamation on the Family and the creation of the church's Perpetual Education Fund. Hinckley dedicated more LDS Church temples than anyone else - more than half of the current temples. By the time of his death, it was estimated that approximately one-third of the church's membership had joined the church under Hinckley's leadership. As president of the church, he was also chairman of the Church Boards of Trustees/Education. Hinckley was practical, imaginative and bold in his approach and understood the potential of technology and the media in advancing the gospel of Jesus Christ. He spent much of his time traveling the world and befriending members of other church and those of other faiths. He urged young men and women to be better human beings and believed in the sanctity of marriage and family. For his services to humanity, he was honored with many awards. 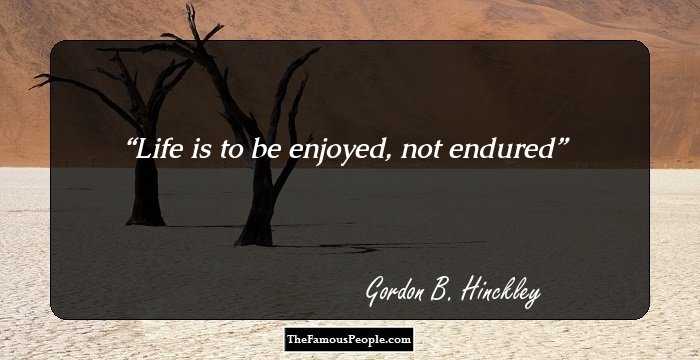 American Spiritual & Religious Leaders
Cancer Men
Career
Hinckley became a missionary for the LDS Church and served in the London-based British Mission from 1933 to 1935 and returned to the United States after preaching in both Berlin and Paris.
In 1935, he became the executive secretary of the church's Radio, Publicity and Missionary Literature Committee and was responsible for developing the church's fledgling radio broadcasts and using new communication technologies.
Starting in 1937, he served on the Sunday School General Board. After WWII, he served as executive secretary to the church's Missionary Committee, the church's liaison to Deseret Book, the largest LDS book publisher.
In the early 1950s, it was decided to use the media to present the ordinances at the Swiss Temple in ten languages and Hinckley’s background in journalism and public relations came to the fore.
He became an Assistant to the Quorum of the Twelve Apostles in the church general authority, and in 1961, ordained an apostle in the Quorum, one of the governing bodies in the church hierarchy.
Made a counselor in the First Presidency in 1981, his responsibilities increased for much of the routine affairs in running the church owing to the ill-health of church president and his aging counselors.
Between 1985 and 1995, he was appointed as first counselor to two successive presidents of the quorum namely, Ezra Taft Benson and Howard W. Hunter which prepared him for his own presidency.
When Hunter died in 1995, he succeeded to the presidency of the Church at the age of 85 surpassing David O. McKay to become the oldest president in church history.
He accelerated the building of temples during his presidency, from 47 operating temples in the church to 124 at the time of his death, with 14 announced or under construction.
Continue Reading Below
In 1996, church membership in countries other than America surpassed that of the U.S. and a 60 Minutes interview of Hinckley by Mike Wallace was broadcast during a segment on the LDS Church.
In 2000, he addressed the youth of the church and advised them to have six traits, named the Six Be's - Be Grateful, Be Smart, Be Clean, Be True, Be Humble, Be Prayerful, to work on.
The rebuilding of the historic Nauvoo Illinois Temple was done under his guidance. The structure itself was built in the Greek Revival architectural style using limestone block in the site of the earlier temple.
In 2006, he attended the 150th anniversary of the Mormon handcart companies in Iowa City and participated in a ceremony at Brigham Young University, for a new building to be named in his honor.
In 2007, he rededicated the Salt Lake Tabernacle following an extensive renovation and made his last public appearance early next year, to offer prayer at the rededication of the Utah State Capitol. 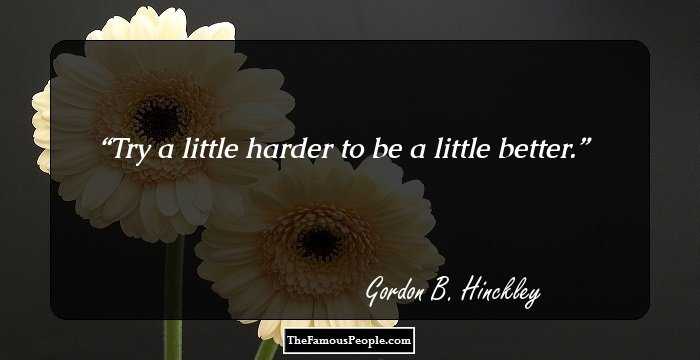 Major Works
In September 1995, Hinckley released ‘The Family: A Proclamation to the World’, a statement of belief regarding the sanctity of the family and marriage and declaring that the family is central to the Creator's plan.
In 2001, he announced the Perpetual Education Fund, a large endowment that provides loans to students in developing nations. The funds for this program are mostly derived from donations from members of the Church.
Awards & Achievements
In 2004, the U.S. President George W. Bush awarded Hinckley the Presidential Medal of Freedom in a White House ceremony, for his efforts to improve humanitarian aid and education funding across the globe.
He received many educational honors, including the Distinguished Citizen Award from Southern Utah University, Distinguished Alumni Award from the University of Utah, and 10 honorary doctorates from various colleges.
He received the Silver Buffalo Award, the highest honor bestowed by the Boy Scouts of America, and was honored by the National Conference for Community and Justice for his contributions to the world. 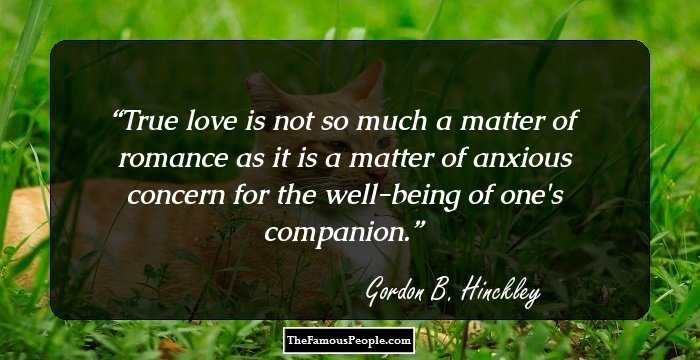 Quotes: Love
Personal Life & Legacy
Hinckley married Marjorie Pay in 1937 and had five children. His sons Richard and Clark have served the church in leadership positions, while daughter Virginia was a member of the church's Young Women organization.
Hinckley died at the age of 97 on January 27, 2008, in his Salt Lake City apartment. He is buried next to his wife, Marjorie Pay in the Salt Lake City Cemetery. The grave is located just south of 10th Avenue, between the cemetery's Main and Hillside streets.
Trivia
According to this religious leader, “True love is not so much a matter of romance as it is a matter of anxious concern for the well-being of one's companion.”
You May Like

Quotes By Gordon B. Hinckley | Quote Of The Day | Top 100 Quotes

See the events in life of Gordon B. Hinckley in Chronological Order