Mary Cassatt was an American artist best remembered for her paintings depicting the intimate bond between mothers and children. She was one of the leading artists of the Impressionist movement and along with Marie Bracquemond and Berthe Morisot, she is counted amongst the greatest female artists of her time, As an artist she was very interested in studying the private and social lives of women which is evident from her paintings. Born into an upper middle-class family she was raised in a culturally stimulating environment and received a good education. She was very close to her mother, who was a well-educated and refined lady and whose influence on Mary Cassatt was immense. Cassatt was also a wide traveler and it was during a trip to France that she was exposed to the works of artists like Ingres, Delacroix, Corot, and Courbet which motivated her to pursue art as a career. She began studying painting at the Pennsylvania Academy of the Fine Arts and later on moved to Paris to continue her education. Though she initially struggled to establish herself as an artist, she eventually found success with her paintings in which she depicted women and children from her own point of view. She never married and dedicated her entire life to art which was her true passion
Continue Reading Below American Celebrities
Pennsylvania Academy Of The Fine Arts
Women Artists
American Artists
Women Artists & Painters
Childhood & Early Life
She was born as Mary Stevenson Cassatt on 22 May, 1844, in Allegheny City, Pennsylvania, United States, into a wealthy family. She had six siblings.
Her father, Robert Simpson Cassatt was a successful stockbroker and land speculator while her mother, Katherine Kelso Johnston, was a well-educated, intelligent and active woman who had a deep influence on Mary.
Her parents ensured that she received a good education and she was also trained in skills such as homemaking, embroidery, music, sketching and painting that were considered necessary for women of her generation.
Her family traveled to Europe in the 1850s and lived there for many years. It was during this time that she visited the Paris World’s Fair of 1855 and met Degas and Pissarro, both of whom became her mentors later on.
She realized her passion for painting and decided to become a professional artist. She enrolled at the Pennsylvania Academy of the Fine Arts in Philadelphia to study painting though her parents objected to her choice of profession.
She studied at the academy from 1861 to 1865, but she was not satisfied by institution’s treatment of its women students. She ended her studies and moved to Paris in 1866 to study privately.
She was accepted as a student by Jean-Léon Gérôme, a highly regarded teacher, and after studying with him for some time she joined a painting class taught by Charles Chaplin, a noted genre artist.
The Franco-Prussian War broke out in 1870 and she was forced to return home to live with her parents. Her father still refused to support her ambitions and she struggled to find a foothold as an artist. 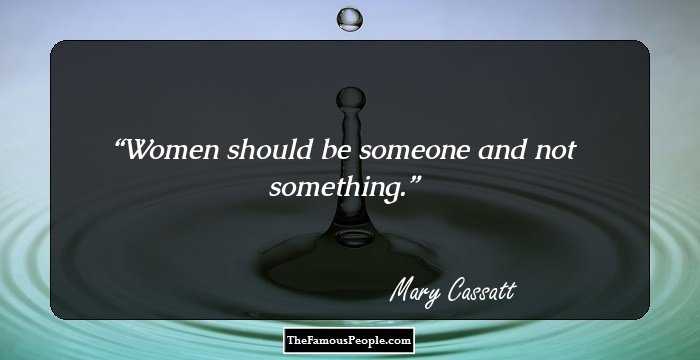 The Most Popular US Veterans
Career
Mary Cassatt returned to Europe in 1871. Her painting ‘Two Women Throwing Flowers During Carnival’ was well received in the Salon of 1872 and found a buyer. Soon her reputation as a budding artist spread.
In 1874, she decided to settle in France and opened a studio in Paris. Soon her sister Lydia joined her, and by 1877 her parents too joined her in her apartment.
In 1877, the artist Edgar Degas invited her to join the Impressionists, a group that had begun their own series of independent exhibitions in 1874. She admired Degas’s works and immediately joined the group, becoming the only American associated with the Impressionists.
Influenced by Degas and others, she refined her style and revised her technique and composition. Degas became her chief mentor and advised her on her technique and encouraged her to experiment.
Mary Cassatt was drawn to family themes and portraits of women, and was especially fascinated by the bond between mothers and children. Several of her famous paintings including ‘Mother and Child Before a Pool’, ‘The Child's Bath’, ‘Under the Horse Chestnut Tree’, and ‘Madame Meerson and Her Daughter’ depict the intimate relationship between mothers and children.
After achieving much fame and success as a painter she became an advisor to several major art collectors.
Major Works
Her painting, ‘The Child’s Bath’ (1893) is one of her more famous works depicting moments of tenderness between a mother and her child. The scene is based on the everyday bathing of a child, and shows how the mother gently bathes her offspring.
Awards & Achievements
Mary Cassatt was awarded the Légion d'honneur in 1904 in recognition of her contributions to the arts.
Personal Life & Legacy
She was totally dedicated to her art and realized at a young age that marriage would be detrimental to her career and thus never got involved in any relationship. She was also a staunch feminist who refused to be stereotyped as a “woman artist”.
She shared a deep friendship with the artist Edgar Degas who was also her mentor. She was deeply influenced by him and he advised her on her technique of painting.
She suffered from various medical conditions during her later life. In 1911 she was diagnosed with diabetes, rheumatism, neuralgia, and cataracts, and became totally blind towards the end of her life.
Mary Cassatt died on 14 June, 1926 at Château de Beaufresne, near Paris
You May Like

See the events in life of Mary Cassatt in Chronological Order