Marlene Dietrich was a popular German-American movie star and singer. This internationally famed actress cum singer was a frontline performer with an amazing long career in the show business. One of the highest paid actresses of her time she reached super stardom and was named the 9th greatest female star of classic Hollywood Cinema by the ‘American Film Institute’. Starting her career on stage and in silent films, she reached pinnacle of success by giving stunning performances in films like ‘The Blue Angel’, ‘Sanghai Express’ and ‘Desire’. A symbol of glamour and elegance, she continuously developed herself both professionally and personally. Her rendition in films and enthralling cabaret dancing was seductive, magical and ageless. Her image epitomized by Lola-Lola in ‘The Blue Angel’ was of an enticing cabaret singer with a top hat and silk stockings – a progressive woman who is financially independent and can choose her own men. During the Second World War she was seen as a high-profile performer. After the Second World War she mostly performed as a marquee artist doing live shows around the globe occasionally doing films. Nico
DID WE MISS SOMEONE?
CLICK HERE AND TELL US
WE'LL MAKE SURE
THEY'RE HERE A.S.A.P
Quick Facts

American Celebrities
German Celebrities
Singers
Actresses
American Women
German Women
Childhood & Early Life
Marie Magdalene Dietrich was born to Wilhelmina Elisabeth Josephine and Louis Erich Otto Dietrich as their youngest daughter on December 27, 1901. Her birthplace was Leberstrasse 65 in Schöneberg district, Berlin, Germany.
Her father who died in 1907 was a police lieutenant and mother belonged to a family of jewellers and clock-makers in Berlin. After her father’s death, her mother Wilhelmina Elisabeth courted Eduard von Losch, a first lieutenant of Grenadiers and eventually married him in 1916.
At 11 she adopted the name Marlene, bridging her first two names. From 1907 to 1917 she studied in Auguste-Viktoria Girls' School and completed graduation in 1918 from ‘Victoria-Luise-Schule’. She studied English and French.
She learnt violin and was inclined into poetry and theatre in her teens. Later, due to wrist injury she gave up the aspiration of becoming a concert violinist and treaded towards acting. 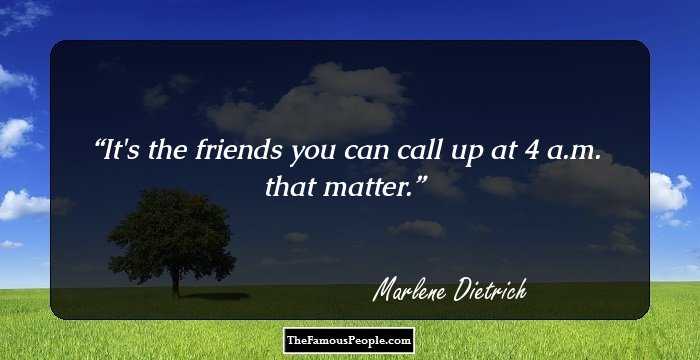 Quotes: You, Friends
Continue Reading Below
Career
Her first job in 1922 as a pit orchestra violinist lasted for four weeks. Marlene Dietrich worked with Gudio Thielscher in ‘Girl-Kabarett’ as chorus girl and in revues of Rudolf Nelson in Berlin. She failed audition in drama academy of Max Reinhardt but eventually worked as a chorus girl in his theatres enacting trivial roles.
In 1923 she made her debut in films playing a small part in ‘The Little Nepolean’. She worked in ‘Tragodie der Liebe’ with Rudolf Sieber, her future husband.
During 1920s, she performed in Vienna and Berlin, both on stage and films. Her remarkable stage shows include William Shakespeare’s ‘A Midsummer Night's Dream’, George Bernard Shaw's ‘Back to Methuselah’ and musicals like ‘Broadway’.
Marlene played a leading part in the film ‘Die Frau, Nach Der Man Sich Sehnt ’ for the first time in 1929. Her real breakthrough came with the film ‘The Blue Angel’ in a role of a sensual cabaret dancer Lola-Lola.
In April 2, 1930 she departed for the US and signed with ‘Paramount Pictures’. In November 14 her first American film ‘Morocco’ released.
Till 1935 she worked in six films with ‘Paramount Pictures’ under the direction of Josef von Sternberg including classics like ‘Dishonored’ and ‘Sanghai Express’.
In 1936 she worked in ‘Desire’, a commercially successful film by Frank Borzage. ‘The Garden of Allah’, her first color film produced by David O. Selznick fetched her $200,000.
In 1937 she starred in ‘Knight Without Armour’ under the production of Alexander Korda drawing a salary of $450,000.
Around 1937, officials of the Nazi Party tried to lure her by offering lucrative contracts to return to Germany but she refused their offers and applied for US citizenship.
Continue Reading Below
Some outrageous offers lured her away from Paramount pictures and she received a salary of $200,000 and $450,000 for ‘The Garden of Allah (1936) and Knight Without Armour (1937) respectively. Even though she was one of the best paid stars, her public popularity had slowly declined and American film exhibitors labelled her as ‘box office poison’, a title shared by the likes of Greta Garbo, Katherine Hepburn and Mae West.
In 1939 with a significant pay cut she worked in a western comedy named ‘Destry Rides Again’.
Though she could not regain her earlier success, she worked in different films for next two decades with established directors like Billy Wilder, Fritz Land and Alfred Hitchcock.
Marlene Dietrich was an anti-Nazi and toured the US during the Second World War and performed for Allied troops.
Early 1950s to mid 1970’s saw her exclusively performing live in theatres of all major cities as a high profile cabaret dancer.
On September 29, 1975, her career almost ended after she fell from stage in Sydney Australia and broke her thigh.
‘Just a Gigolo’ in 1979 was her last film where she did a cameo and sang the title song. 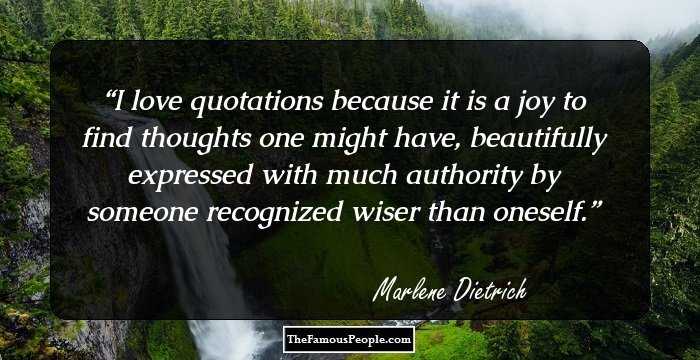 Quotes: Love, I
Major Works
Her breakthrough film was ‘The Blue Angel’ in a role of a sensual cabaret dancer Lola-Lola where her signature song ‘Falling in Love Again’ was introduced.
In 1932, Marlene Dietrich starrer ‘Sanghai Express’ was a huge box office success fetching highest collections of the year.
Personal Life & Legacy
On May 17, 1923, she married Rudolf Sieber, an assistant director in Berlin.
On December 13, 1924, her only daughter Maria Elisabeth Sieber was born.
She died on May 7, 1992 in Paris due to renal failure at 90 and was buried at Roman Catholic Church, ‘La Madeleine’.
Even though she married only once, she had an unending string of affairs throughout her career. She had affairs with actors Gary Cooper and James Stewart. Marlene was in relationship with writer Erich Maria Remarque, from 1938 to 1941. Almost at the same time, she was having an affair with the French actor Jean Gabin. Cuban-American writer Mercedes de Acosta was also one of her lovers. With actor Yul Brynner, her affair lasted more than a decade. She also claimed to have had affairs with George Bernard Shaw, John F. Kennedy and John Wayne. 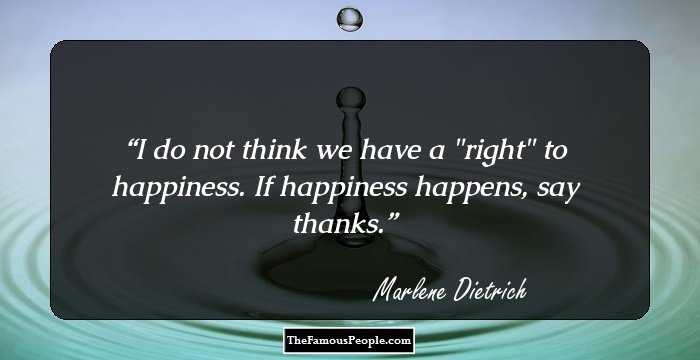 Quotes By Marlene Dietrich | Quote Of The Day | Top 100 Quotes

See the events in life of Marlene Dietrich in Chronological Order