Diane Kruger is a German-American actress and former fashion model. She is famous in Hollywood for her critically acclaimed roles like ‘Helen of Sparta’ in ‘Troy,’ ‘Bridget von Hammersmark’ in ‘Inglourious Basterds,’ ‘Dr. Abigail Chase’ in ‘National Treasure,’ etc. After her dream of becoming a ballerina got crushed because of an injury, Kruger was trained in modeling in France after which she started her career in the entertainment business as a model. She modeled for many years for brands like ‘Yves Saint Laurent,’ ‘Chanel,’ ‘Christian Dior,’ etc. and featured in the cover pages of ‘Vogue Paris,’ ‘Cosmopolitan,’ etc. In pursuit of acting, she decided to quit modeling at the age of twenty-two, when her career was at peak. Her interest in acting turned into passion when she took lessons at the ‘Cours Florent.’ After making brief appearances in French movies, she got her first big break in 2003, with ‘Michel Vaillant.’ Apart from acting in movies, she is also associated with the fashion world as she is the global spokesperson of ‘L’Oreal’ and the face of Calvin Klein’s fragrance ‘Beauty.’ Meryem Uzerli
15th July In History
DID WE MISS SOMEONE?
CLICK HERE AND TELL US
WE'LL MAKE SURE
THEY'RE HERE A.S.A.P
Quick Facts

Diane Kruger was born on July 15, 1976, in Algermissen, West Germany, to Hans-Heinrich Heidkruger and Maria-Theresa. Her father was a computer specialist, while her mother worked in a bank.

She was raised a Roman Catholic and went to a Catholic school. She wanted to become a ballerina and secured admission in the ‘Royal Ballet School,’ London. However, after an injury she had to give up her dream of becoming a ballerina. 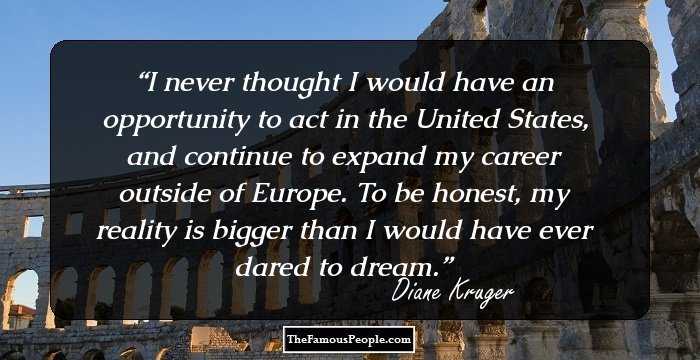 Kruger moved to Paris and pursued modeling. She represented her country in the ‘Elite Model Look’ in 1992, and managed to land advertisement assignments for brands like ‘Yves Saint Laurent,’ ‘Chanel,’ ‘Giorgio Armani,’ ‘Christian Dior,’ etc.

She did runway shows for Marc Jacobs, ‘D&G,’ and Sonia Rykiel. She was also featured on the cover page of fashion magazines like ‘Vogue Paris,’ ‘Cosmopolitan,’ etc. After pursuing modeling for years, she stopped modeling to get into acting.

She started taking acting lessons at the ‘Cours Florent.’ This helped her land cameo roles in some French movies. It was not until 2002, that she managed to land a prominent role in a movie—‘The Piano Player.’

In 2003, Kruger played the lead role of ‘Julie Wood’ in a French movie titled ‘Michel Vaillant,’ starring opposite Sagamore Stevenin. The movie was directed by Louis-Pascal Couvelaire and written by Jean Graton.
She played ‘Lisa’ in ‘Wicker Park’—an American psychological romantic mystery film—in 2004, starring alongside Josh Hartnett and Rose Byrne. It was a remake of the French movie ‘L’Appartement.’

The most important role of her career came in 2004, when she played ‘Helen of Sparta’ in Wolfgang Petersen's epic film ‘Troy.’ The movie, which was based on Homer’s ‘Iliad,’ starred Brad Pitt and Orlando Bloom among other prominent actors.

Kruger starred alongside Nicolas Cage in ‘National Treasure’ in the same year. Later on, she appeared in films like ‘Joyeux Noël’ (2005) and ‘Copying Beethoven’ (2006). She reprised her role as ‘Dr. Abigail Chase’ in ‘National Treasure: Book of Secrets’ (2007).
She was given an opportunity to be the hostess of the opening and closing ceremonies of the 2007 ‘Cannes Film Festival.’ The following year, she was selected as a jury member of the 58th ‘Berlin International Film Festival.’
In 2009, Tarantino cast her in his movie ‘Inglourious Basterds’ in which she starred alongside actors like Brad Pitt and Christoph Waltz. She was nominated for the ‘Screen Actors Guild Award’ for ‘Best Supporting Actress’ for her role in the movie.
Continue Reading Below

She was a member of the jury for the Main Competition at the 2012 ‘Cannes Film Festival.’ She also starred in the film adaptation of Stephenie Meyer's novel ‘The Host’ in 2013.
She then had a recurring role as police officer ‘Sonya Cross’ in FX’s ‘The Bridge’ (2013-14). In 2015, she was named one of the members of the jury for the Main Competition at the ‘Venice Film Festival.’
She was cast alongside Bryan Cranston and John Leguizamo in the biographical crime thriller ‘The Infiltrator’ (2016). The following year, she played the titular character in the mini-series ‘The Kellyanne Conway Story.’
In 2018, she shared screen space with the likes of Kristen Stewart, Laura Dern, and Jim Sturgess in the biographical drama film ‘JT LeRoy.’ Currently, the actress is busy with her upcoming projects ‘355’ and ‘Swimming with Sharks.’ 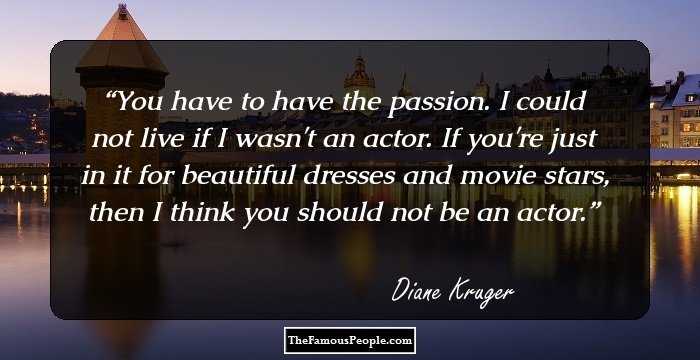 Quotes: Beautiful
Major Works
By far, Kruger’s role in Tarantino’s German-American black comedy war film ‘Inglourious Basterds’ (2009) is considered to be her most prominent role. For her role as a German actress-turned-Allied spy, she earned a ‘Screen Actors Guild Award’ nomination.
Personal Life & Legacy
Kruger married French actor and director Guillaume Canet in 2001, after dating him for two years. The couple divorced in 2006 and do not have any children.

She met actor Norman Reedus while filming the movie ‘Sky’ in 2015. She started a relationship with Reedus in 2016, and their daughter, Nova was born in November 2018. 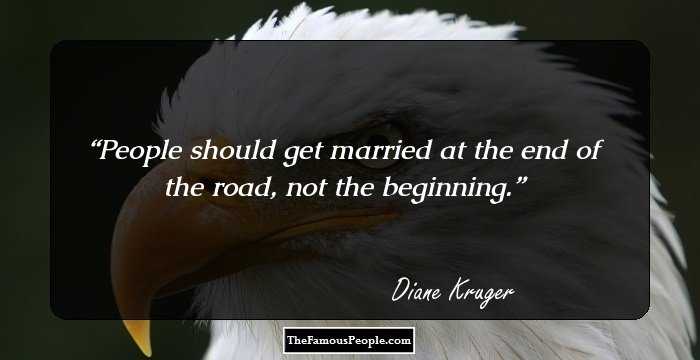 Trivia
She told media that her marriage with Guillaume did not work because their work kept them apart for long periods of time. She is still good friends with her ex-husband.
She was in a relationship with Canadian-American actor Joshua Jackson from 2006 to 2016.
Besides German, Kruger speaks English and French fluently.
She is the global spokesperson for ‘L’Oreal’ and the face for Calvin Klein’s fragrance brand ‘Beauty.’
She dubs for herself in three languages—English, French, and German.
She was trained at the ‘Cours Florent’ and won the ‘Classe Libre’ award for best actor.
She was named the ‘Sexiest international import’ by Victoria's Secret ‘What Is Sexy’ list (2012).

Quotes By Diane Kruger | Quote Of The Day | Top 100 Quotes

See the events in life of Diane Kruger in Chronological Order