Alexandra Maria Lara is a Romanian-German film and television actress, best known for her performances in films such as ‘Downfall,’ ‘Youth Without Youth,’ ‘Control,’ and ‘Rush.’ Born as the only child of Romanian actor Valentin Plătăreanu, Alexandra stepped into showbiz early and landed up playing lead roles in different television dramas by the time she was sixteen. Her critically acclaimed performance in the made-for-television film ‘Der Tunnel’ paved way for other notable roles, including that of Adolf Hitler's secretary Traudl Junge in the critically and commercially successful Oscar nominated historical war drama film ‘Downfall.’ Other Oscar nominated films featuring the diva include ‘The Reader’ and ‘Der Baader Meinhof Komplex.’ Over the years, Alexandra has worked in several noteworthy national and international projects. These include British biographical film ‘Control,’ Greek drama film ‘The Dust of Time’ and French historical miniseries ‘Napoleon’ among others. She also remained member of the jury at the Cannes Film Festival and the Transylvania International Film Festival. Alicia von Ritt...
DID WE MISS SOMEONE?
CLICK HERE AND TELL US
WE'LL MAKE SURE
THEY'RE HERE A.S.A.P
Quick Facts

German People
Scorpio Actresses
German Actresses
Actresses Who Are In Their 40s
Women Film & Theater Personalities
Childhood & Early Life
Alexandra Maria Lara was born Alexandra Maria Plătăreanu on November 12, 1978, in Bucharest, Socialist Republic of Romania to Valentin Plătăreanu and Doina. In 1983, when she was four and a half years old, her family resolved to immigrate to West Germany to avoid living in the reign of Romanian communist politician and dictator, Nicolae Ceauşescu. Her family initially planned to move to Canada, however they relocated and settled in the city of Freiburg im Breisgau in Baden-Württemberg and later shifted to Berlin.
She graduated from the Französisches Gymnasium Berlin in 1997. Thereafter from 1997 to 2000, she attended the Theaterwerkstatt Charlottenburg under tutelage of her father, co-founder of the drama school with Henner Oft. Meanwhile she started appearing in several television dramas like the 1994 miniseries ‘Stella Stellaris.’
Continue Reading Below
Career
Alexandra bagged her breakthrough role Pia Mangold in the 1996 German television series ‘Mensch, Pia!.’ She earned critical acclaim starring as Charlotte 'Lotte' Lohmann in the 2001 released made-for-television German film ‘Der Tunnel.’ This was followed by varied roles in national and international television and film productions. Some of them include playing Annette in the German comedy film ‘Naked’ (2002), Countess Marie Walewska in the French historical miniseries ‘Napoleon’ (2002), and Tonya Gromyko Zhivago in the British television miniseries ‘Doctor Zhivago’ (2002).
One of her early notable performances include starring as Adolf Hitler's last private secretary Traudl Junge in the Oliver Hirschbiegel directed historical war drama film ‘Downfall.’ The critically acclaimed film that premiered at the Toronto Film Festival on September 14, 2004 became a huge commercial success and fetched Best Foreign Language Film award nomination at the 77th Academy Awards. In 2005, she served as a jury member at the 4th Transylvania International Film Festival.
Her performance in ‘Downfall’ led American film director Francis Ford Coppola to write a letter to her and give her the starring role of Laura, Veronica in the 2007 released fantasy drama film ‘Youth Without Youth’ written and directed by him.
In the meantime, she starred in different other productions including as Lili in the three-part TNT aired serial ‘The Company’ (2007); as Suzie in the British comedy film ‘I Really Hate My Job’ (2007); and most notably as Belgian journalist Annik Honore in the October 5, 2007 released critically and commercially successful British biographical film ‘Control,’ based on the life of Ian Curtis.
Her next notable film was the Uli Edel directed 2008 German flick ‘Der Baader Meinhof Komplex‘, where she essayed the role of German revolutionary and urban guerrilla Petra Schelm. This was followed by the 2008 German-American romantic drama film ‘The Reader’ featuring her as a former victim of a concentration camp, Ilana Mather. Both the films bagged Oscar nominations at the 81st Academy Awards.
In 2008, she also appeared in the Theodoros Angelopoulos written and directed Greek drama film ‘The Dust of Time’ that starred Willem Dafoe and Irène Jacob among others. That year she served as a jury member of the Cannes Film Festival as well.
The Anthony Hopkins starrer and James Ivory directed 2009 American drama film ‘The City of Your Final Destination’ featured her as Deirdre Rothemund. That year she also starred in the French espionage thriller film ‘L'affaire Farewell’ and in the multilingual Emirati film ‘City of Life.’
The internationally co-produced fantasy film ‘A Distant Neighborhood’ directed by Sam Garbarski and released on May 20, 2010 starred Alexandra as Anna Verniaz (née Zorn). It received generally positive reviews from critics. That year she also appeared in the Franco-German drama film ‘Small World.’
She furthered her fame with the role of Marlene Lauda starring along with Chris Hemsworth and Daniel Brühl in the biographical sports film ‘Rush.’ The Ron Howard directed film that screened at the 2013 Toronto International Film Festival prior to its theatrical release in the UK, the US and Germany emerged as a sensational hit and earned kudos from the critics circle.
The Saul Dibb directed 2015 British-French-Belgian Second World War romantic drama film ‘Suite Française’ that starred her husband Sam Riley among others featured her in the character of Leah.
She played space station commander and DLR Astronaut Ute Fassbinder in the October 20, 2017 released American sci-fi disaster film ‘Geostorm.’ It marked feature film directorial debut of Dean Devlin.
Her next feature with her husband was in the Ben Wheatley directed 2018 British comedy drama film ‘Happy New Year, Colin Burstead.’ She played Hannah, German girlfriend of her husband’s character David in it. The film screened at the 62nd BFI London Film Festival in competition on October 11, 2018, aired on December 30 that year on BBC2 and was later shown at the 2019 Palm Springs International Film Festival. It received generally positive critical reviews.
The Matthew Vaughn directed and produced upcoming period action spy film ‘The King’s Man’ that is planned for a February 14, 2020 release in the US by Walt Disney Studios Motion Pictures will feature Alexandra in the role of Polly.
Family & Personal Life
Alexandra was romantically associated with Florian Unger for nine years before parting ways in 2006. She met English actor and singer Sam Riley on the sets of ‘Control.’ They dated for a while and then married on August 8, 2009. Together they have a son called Ben born in January 2014. As of 2011, she lives with her family in Berlin.
She is fluent in Romanian, English, French and German languages. The diva, according to sources, has remained unsuccessful in garnering diving licence thrice. 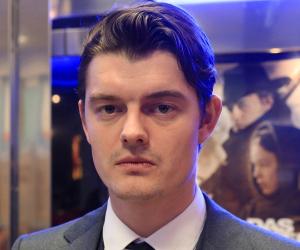