Advanced Search
Mahinda Rajapaksa is a Sri Lankan politician who served as the country’s 6th President. He was first sworn in as the president in November 2005 and re-elected for a second time in office in January 2010 and served in this post till January 2015. A lawyer by profession, he began his political career decades ago when he was first elected to the Parliament of Sri Lanka. He had served as labour minister and minister of fisheries and aquatic resources during the initial years of his political career. A defender of human rights, he became a very popular politician who earned the love and respect of his countrymen. With his dedication towards the country and strong ethics, he became a much beloved politician who was eventually chosen as the Prime Minister of Sri Lanka in 2004. The very next year he was sworn in as the fifth Executive President of the country. When he assumed the office, Sri Lankan politics was under severe turmoil with the extremist militant outfit Liberation Tigers of Tamil Eelam (LTTE) threatening to shatter the peace in the country. With his able leadership and meticulous planning he launched a war on terrorism which ultimately led to the Sri Lankan army defeating the LTTE. Sirimavo Bandar...
DID WE MISS SOMEONE?
CLICK HERE AND TELL US
WE'LL MAKE SURE
THEY'RE HERE A.S.A.P
Quick Facts

Sri Lankan People
Political Leaders
Sri Lankan Men
Tall Celebrities
Tall Male Celebrities
Childhood & Early Life
He was born as Percy Mahendra “Mahinda” Rajapaksa on 18 November 1945 in Weerakatiya, Southern Province, British Ceylon (now Sri Lanka) into a family of prominent politicians. His father, D. A. Rajapaksa had served as a Member of Parliament and a Cabinet Minister while his uncle had been a State Councillor.
He attended the Richmond College in Galle before moving on to Nalanda College in Colombo. He also studied at Thurstan College later on.
Continue Reading Below
Career
He was elected to the Parliament in 1970 when he was just 24, thus becoming its youngest ever member. During the 1970s he also studied law at the Colombo Law College and received a degree in 1974.
He lost his parliamentary seat in 1977 and decided to focus on his law career. He became a successful lawyer and practiced in Tangalle. He continued his law practice for several years along with his parliamentary career.
He was re-elected to Parliament in 1989 to represent Hambantota District under Proportional Representation. He became prominent as a politician during this time as he was a defender of human rights.
After the election victory of the People’s Alliance headed by Chandrika Kumaratunga in 1994, he was made the Minister of Labour, a post he held until 1997 after which he was appointed the Minister of Fisheries and Aquatic Resources following a cabinet reshuffle.
He was appointed as the Leader of the Opposition in March 2002 after the United National Party (UNP) defeated the People’s Alliance in the 2001 elections.
The United People’s Freedom Alliance gained a slim majority in the Parliamentary Elections of 2004 and Rajapaksa was sworn in as Sri Lanka’s 13th Prime Minister on 6 April 2004. He also held the Ministry of Highways while he served as the Prime Minister.
He was chosen by the Sri Lanka Freedom Party to contest the Presidential election in 2005 against former Prime Minister Ranil Wickremesinghe, the leader of the United National Party (UNP).
The UNP led a huge election campaign, yet Rajpaksa was able to gain a narrow victory by 190, 000 votes. Thus he became the President of Sri Lanka on 19 November 2005 and also took the portfolios of Defence and Finance in the new cabinet on 23 November.
Sri Lanka was going through a political turmoil at the time of his becoming the president. The Liberation Tigers of Tamil Eelam (LTTE), better known as the Tamil Tigers, a terrorist group, was threatening the security of the country with its extremist activities.
Continue Reading Below
Rajapaksa set to deal with this pressing issue immediately after taking office. Under his direction, the Commander of the Sri Lanka Army Sarath Fonseka and Rajapaksa's brother and Defense Secretary, Gotabhaya Rajapaksa, led the country's armed forces in their battle against the LTTE.
A brutal battle between the Sri Lankan Army and the Tamil Tigers ensued and after fighting the LTTE over the next three and a half years, Fonseka and Gotabhaya Rajapaksa ultimately defeated the Tigers and killed their leader Velupillai Prabhakaran in 2009, signaling the end of the militant outfit that had threatened Sri Lanka for long.
He became a hero in his country for successfully defeating the LTTE and securing the integrity and sovereignty of Sri Lanka. Because of his popularity he was easily re-elected for a second term in office on 27 January 2010.
He served for five more years before being defeated by Maithripala Sirisena in the 2015 Presidential Elections.
Major Works
Rajapaksa is best known for the leadership role he played in ending the 30-year war against the militant group LTTE--one of the most extreme terrorist organizations in the world. The Sri Lankan army defeated the LTTE in 2009 in a dramatic war.
Awards & Achievements
He was conferred with a Doctor of Law from the University of Colombo in September 2009.
In February 2010, he was awarded an Honorary Doctorate by the Peoples’ Friendship University of Russia for his contribution for world peace and outstanding success in defeating terrorism.
He was conferred with an Honorary Doctorate by the Beijing University of Foreign Languages in China in 2011.
Personal Life & Legacy
He married Shiranthi Wickremasinghe, a child-psychologist and educator, in 1983. The couple has three sons, Namal, Yoshitha and Rohitha. His son Namal followed in his father’s footsteps to become a politician.
Recommended Lists:
Leaders #1625
Lawyers & Judges #293

See the events in life of Mahinda Rajapaksa in Chronological Order 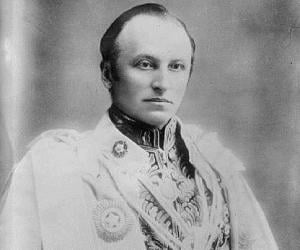