The life of Madame C.J Walker is a one of its kind ‘rags to riches’ story, which has been largely unsung. From merely being a slave at a plantation like many other people belonging to the African American community, the determined woman strived hard to overcome her miseries. Walker took up the job of a cleaner to earn enough money to buy herself a meal and then moved on to become a sales person. After learning the tricks of the trade, this woman ventured into entrepreneurship as she also felt that there is a need to create a product which looks into the problem of hair care. Walker even motivated many other women to become entrepreneurs and trained them in the art of selling, which was an important aspect of any successful business. The Afro-American woman even paved way for conventions to create a wave of entrepreneurship in the nation. Madame, thus, went on to become the first richest woman of her race in the whole of United States of America. However, she even donated a good amount of her fortune at the time of her death for the cause of the needy. Explore this biography to learn more about the life and achievements of Madame C.J Walker Jessica Alba
Business Women #6
Business People #19
DID WE MISS SOMEONE?
CLICK HERE AND TELL US
WE'LL MAKE SURE
THEY'RE HERE A.S.A.P
Quick Facts

American Celebrities
African American Slaves
Business Women
Black Business Women
Black Business People
Childhood & Early Life
Walker was born in a village named Delta, located in the American state of Louisiana on the 23rd of December 1867.She was originally christened Sarah Breedlove by her parents. Sarah had five siblings, namely Solomon, Owen Jr., Alexander and James as well as a sister named Louvenia.
Her family members were slaves, who lived for many years in a plantation in the state of Louisiana. It is believed that her mother succumbed to Cholera during the year 1872, after which Sarah’s father got married for a second time. However, he too lost his life a few years later.
When she was hardly seven years old, Madame sought refuge at the residence of her sister named Louvenia, who was married to a man named Willie Powell. 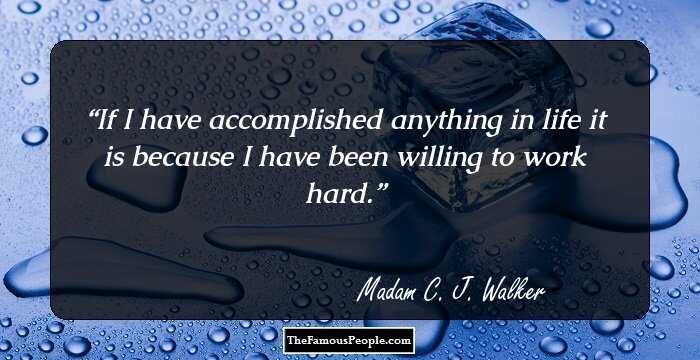 Who Is The Most Popular BTS Member?
Career
At the age of twenty, Sarah, along with her 2-year-old child, moved to the port city of St. Louis, a place where two of her siblings lived. She soon found the job of a washer woman in this city to make ends meet. Madame Walker hardly earned around a dollar as daily wages through this occupation.
She then went on to work with an entrepreneur named Annie Turnbo Malone and sold hair care products on behalf of the business woman.
Her knowledge on hair care products helped Sarah turn into a beautician, hairdresser and a retailer who earned profits through the sales of cosmetic creams. She soon started employing many female agents to create awareness of the culture of enhancing beauty.
Madame, along with her second husband Charles Joseph, set up an institution named ‘Lelia College’ in 1908 in a bid to groom the sales persons into ‘hair culturists’. She then relocated to the city of Indianapolis two years later and initiated various business establishments related to hair care, which included a beauty school and salon.
The city became a headquarters of Madame’s business operations, which soon expanded across cities such as Jamaica, Cuba, and Panama.
During the year 1917, this businesswoman organized an annual meet of ‘Madame Walker Beauty Culturists’, in the city of Philadelphia. This event was one of the first of its kind in the United States during its time.
The lady motivated her employees by offering gifts to sales persons who managed to earn more revenue by selling more of her products. She also felicitated those who contributed a significant amount towards charity.
She even initiated the ‘Walker Hair Culturists Union of America’ in 1917, which was the first ever convention at that time which was exclusively aimed at encouraging women to venture into commerce. 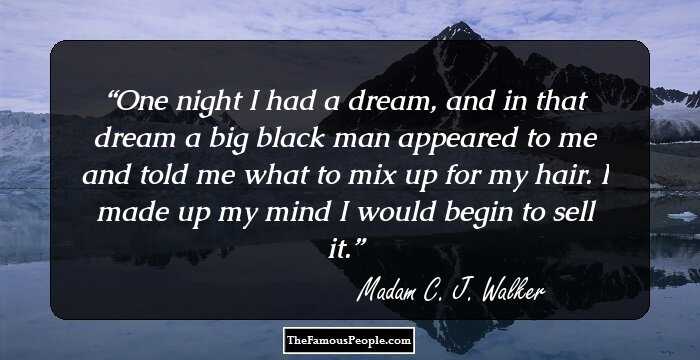 Continue Reading Below
Major Works
Walker’s most significant contribution towards the hair woes plaguing the American masses was her Pomade, a waxy hair cream that promised to reduce hair fall problems and intended to maintain the shine in the hair. These products were packaged in cans with a picture of Madame’s on the outer surface.
Personal Life & Legacy
When Sarah was barely fourteen years old, she entered the wedlock with a man named Moses McWilliams in a bid to escape the torture she was subjected to, by her brother-in-law Willie Powell. The couple had a baby girl who was named A’Lelia.
However, her husband died when Sarah was hardly twenty years old. She then tied the knot with Charles Joseph Walker, who worked with an advertising firm back then. Sarah adopted the name Madame C.J Walker only after she married Charles.
1917 was an eventful year for Madame, even on the personal front, apart from her famous business initiatives. She hired an architect named Verson Woodson Tandy during this period to design a house in New York, which cost her approximately $250,000.
Madame succumbed to death on the 25th of May 1919, due to increase in Hypertension. The business woman was fifty one years old and the wealthiest woman of African-American origin at the time of her death.
Prior to her death, Madame had donated $5000 towards an anti-lynching fund, to put an end to the inhuman form of punishment in the nation. Another $100,000 of her earnings was distributed amongst various charitable organizations.
The lavish residence of this African-American woman, known as the ‘Villa Lavero’ has now been declared as a national historic landmark.
As a mark of tribute to Madame’s achievements, numerous awards and felicitations have been named after the woman. One of them is the ‘Madam C.J Walker Business and Community Recognition Awards’. 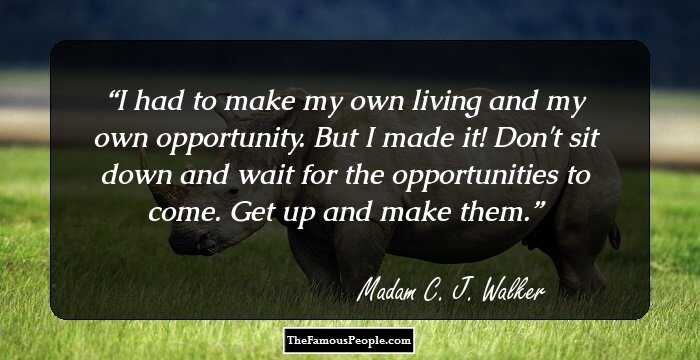 Trivia
The idea of starting a beauty product hit Walker after she lost her hair and faced scalp problems due to washing herself with water which was contaminated with chemicals like ‘Iye’.
You May Like

See the events in life of Madam C. J. Walker in Chronological Order