The successor of King David, King Solomon ruled the United Monarchy of Israel for an unprecedented 40 years, a period of highest prosperity and grandeur. The final king of the United Monarchy, before the split of the empire, King Solomon is, according to the Quran, one of the main Prophets, who is also referred to as Sulayman. He is credited for the construction of the First Temple in Jerusalem and many other significant buildings, including a royal palace. Till date, he is revered for his unparalleled wisdom and is often referred to as ‘The Wisest Man Who Ever Lived’. A prolific writer with great insight, King Solomon authored several books including, ‘The Book of Proverbs’, ‘Ecclesiastes’, ‘Song of Solomon’ and ‘Book of the Wisdom of Solomon’. His regal splendour spread all over the world and he gained adulation from all over. His diplomatic skills earned him great alliances with some of the greatest powers of his time. Ralph Bakshi
Emperors & Kings #54
Miscellaneous #101
Leaders #83
DID WE MISS SOMEONE?
CLICK HERE AND TELL US
WE'LL MAKE SURE
THEY'RE HERE A.S.A.P
Quick Facts

Spouse/Ex-: around 700 other wives and 300 concubines, Naamah

Israeli People
Israeli Men
Childhood & Early Life
King Solomon, also referred to as Jedidiah, was born in Jerusalem to David, the second king of the United Kingdom of Israel, an ancestor of Jesus and Bathsheba.
Adonijah, the eldest son of King David, was the natural heir to the crown. However, King David promised Bathsheba that Solomon would be made king and he kept his promise. 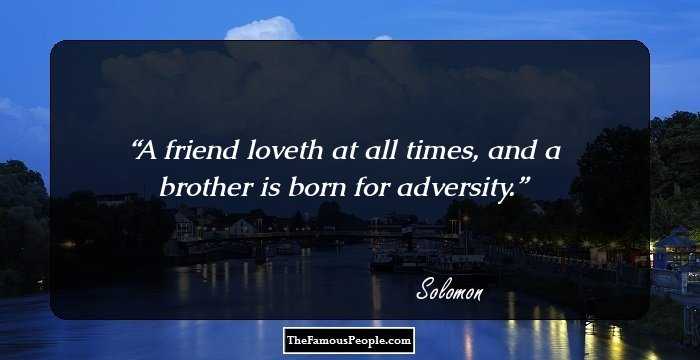 The Best Black Actresses Of All Time
Accession & Reign
Solomon reigned from 970 BC, as the third king of the United Monarchy. He sent David’s priest Abiathar on exile as he supported Adonijah, the eldest son of King David.
Referred to as The Judgment of Solomon from the Hebrew Bible, two women came to him with a child, each claiming the child to be their own. Using his wisdom, he declared that the women who showed compassion was the real mother.
It is believed that around the 10th century BCE, he constructed the First Temple also called the Solomon's Temple, according to the Hebrew Bible. The temple was constructed in ancient Jerusalem.
He was a prolific author and created a large gamut of work. His writings include, ‘The Book of Proverbs’, ‘Ecclesiastes’, ‘Song of Solomon’ and ‘Book of the Wisdom of Solomon’.
According to the Bible, the kingdom prospered and reached the point of its highest glory during his reign. He collected enormous amounts of gold, wealth and other luxuries.
He signed an alliance with Hiram I, King of Tyre, who worked with him closely in many of his projects. It is believed that Hiram I sent him material for the construction of a temple in Jerusalem.
During his monarchy, he built many significant buildings in Jerusalem. He built the infrastructure to provide water supply in the city and constructed the Milo, for the defence of the city.
He created the Ezion-Geber port, which was a main port that facilitated commercial activities of Israel to take place. He also commissioned a navy of ships in Eziongeber.
He ruled until 931 BC and was succeeded by his son, Rehoboam. During the later years of his life, he was known for his magical and exorcist activities, using amulets and medallion seals.
Continue Reading Below 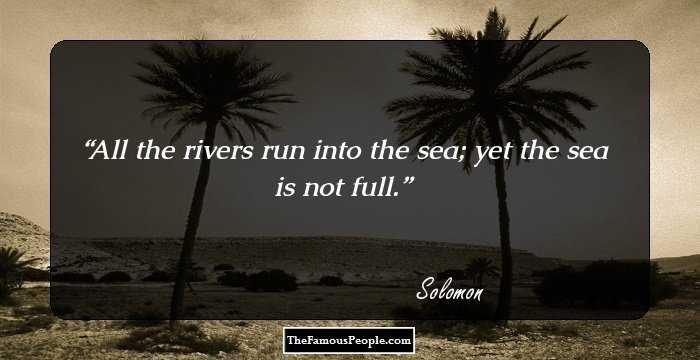 Personal Life & Legacy
From Biblical accounts it is believed that he had around 700 wives and 300 affairs. Some of his wives among others were foreign princesses and Pharaoh's daughter.
The Queen of Sheba, from the Kingdom of Ethiopia, was so impressed with him that she came to meet him with a collection of gifts, which included gold, precious stones and spices.
According to the Hebrew Bible, he died approximately at the age of 59 due to natural causes.
After his death, his son, Rehoboam ascended the throne. Some of the tribes of Israel did not accept him as the king. This resulted in the spilt of the United Monarchy, into Kingdom of Israel and Kingdom of Judah, which Rehoboam subsequently ruled.
He is acknowledged as a central figure in Jewish heritage. In Islam, he is referred to as a prophet and a messenger of god.
A collection of Arabic stories titled, 'One Thousand and One Nights' also known as the 'Arabian Nights', mentioned him in many of the tales.
Legend has it that he also owned a magical key and a magical table. It is also believed that angels helped him in the construction of the temple.
He has been an inspiration to many works of literature and contemporary fiction. Some of the works written include, 'King Solomon's Mines', 'The Divine Comedy’, ‘Die Physiker’, ‘The Baroque Cycle’,‘Bartimaeus: The Ring of Solomon’ and ‘Magi: The Labyrinth of Magic’.
There have also been numerous films made about him and inspired by him. Some of them include, ‘The Kingdom of Solomon’, ‘Solomon and Sheba’ and ‘Solomon’.
Trivia
According to medieval Jewish, Islamic and Christian legends, it is believed that the third and final king of United Monarchy possessed a magical signet ring, which gave him magical powers. 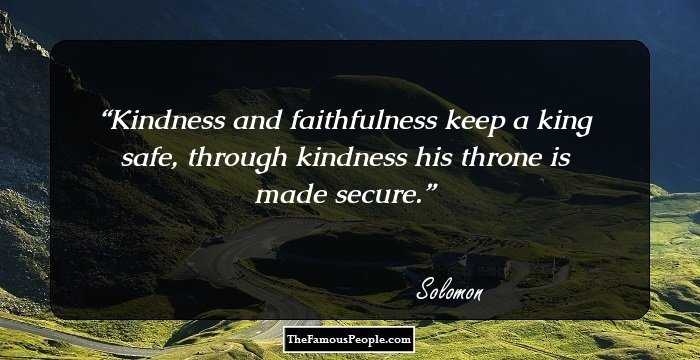 See the events in life of Solomon in Chronological Order