Priscilla Presley is the former wife of late Elvis Presley, singing superstar and King of Rock n Roll. An actor and business magnate by profession, Priscilla has enjoyed success both in small and big screen. She first came into limelight for her relationship with Presley. Interestingly, despite being ten years younger to him, she managed to make him go weak on his knees right after their first meeting. The two shared eight years long courtship period before tying the nuptial knot. However, the marriage did not prosper and the two separated. It was only after her divorce that she commenced her career as an actor and business magnate. She starred in a couple of films, soap operas and television films. She also started her own line of fragrance and linens. Priscilla co-founded Elvis Presley Enterprises and served as its chairperson. The company was responsible for turning Graceland estate, home of Elvis Presley, into top tourist attraction in United States. American People
Business Women
American Women
New Yorkers Actresses
Gemini Actresses
Childhood & Early Life
Priscilla Presley was born as Priscilla Ann Wagner on May 24, 1945 to Ann Iversen and James Wagner, a US Navy pilot in Brooklyn, New York. When she was merely six months old, her father died in a plane crash. Ann Iversen remarried Paul Beaulieu, a US Air Force officer who took over as young Priscilla’s legal father.
Her father’s profession made young Priscilla move from one city to another every two to three years. She loathed relocation for the challenges that it brought of settling in a new city and new environment.
In 1956, her father was transferred yet again to Austin, Texas. Just when Priscilla finally settled down at the new place and had made friends, the transfer orders came in, this time to Wiesbaden, Germany.
It was in Wiesbaden, Germany that Priscilla first met Elvis Presley, who in turn was serving in the United States Army’s 3rd Armoured Division. The two met at a party at Elvis’ home.
Elvis Presley was floored by Priscilla’s beauty and charm. Though she was ten years younger to him, she managed to make a huge impression. The two dated until his departure in March 1960.
The following four years marked the meteoric rise of Elvis Presley as a singer and actor. Despite being extensively busy with his career commitments, the love of the two blossomed so much so that Priscilla visited him in US during the summer of 1962.
In March 1963, she moved to America for good. It was there that she attended the Immaculate Conception High School in Memphis and lived with Presley’s parents. Upon graduating in June 1963, she moved to live-in with Presley. 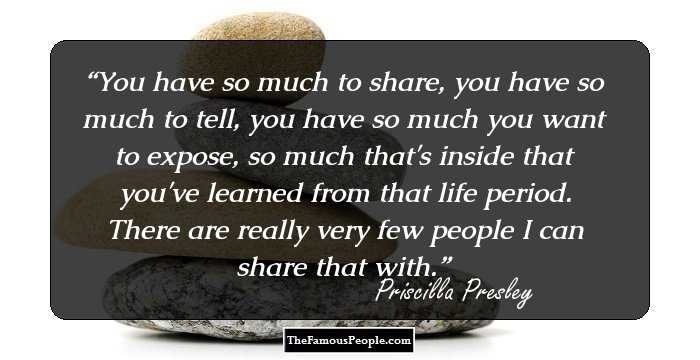 Quotes: You, Life
Continue Reading Below
Career
Priscilla’s career did not start immediately following her studies. Instead she went into the wedlock with the singing sensation Elvis Presley who was popularly known as the King of Rock n Roll
It was following her divorce with Presley in 1973 that she eventually started her career as a proprietor of Bis & Beau, a clothing boutique, along with friend and stylist Olivia Bis. The store was a major hit and had high-society clients including Cher, Lana Turner, Barbara Streisand and Natalie Wood. The store, however, shut down in 1976.
Following Presley’s death in 1977, she served as the executor for his only heir, her daughter, Lisa Marie. The Graceland estate required a whooping amount of $500,000 as maintenance costs which limited Lisa Marie’s inheritance to merely $1 million. Due to financial constraints, selling Graceland estate was the only option before Priscilla. However, she did not succumb to the pressures and instead acted wisely.
She took the risk of converting Graceland estate into a tourist attraction, a move which paid off handsomely. Opened to public on June 7, 1982, the estate came under Elvis Presley Enterprises of which she served as the president. Under her, the enterprise grew on to become a multi-million dollar trust.
In 1988, she launched her own line of fragrance. She soon followed it up with her own range of linens. Meanwhile, she also produced a couple of films including ‘Breakfast with Einstein’ and ‘Finding Graceland’. In 2000, she was appointed to the board of directors of Metro-Goldwyn-Mayer.
Priscilla, all through her life, had been interested in modelling and dancing but Presley’s aversion to his wife having a career in show business restrained her interest to being hobby alone. However, after his death, she pursued a career as an actor.
Her first outing in front of the camera was for a 1980 television show, ‘Those Amazing Animals’. In it, she served as the co-host. Only three years later, she got her officially first acting assignment, for ‘Manhunter’ episode of the show ‘The Fall Guy’ which was in its second season.
In 1983, she starred in the television film, ‘Love is Forever’, opposite Michael Landon. Her acting won her positive response from viewers and makers. Subsequently, she was seen as Jenna Wade in the prime-time television soap opera ‘Dallas’. She played the character for five long years until 1988.
In 1988, she starred opposite Leslie Nielson in the first film of ‘The Naked Gun’ series, ‘Naked Gun: From the Files of Police Squad!’ She was seen in the next two sequels of the series including, ‘The Naked Gun 2½: The Smell of Fear’ (1991) and ‘Naked Gun 33⅓: The Final Insult’. All the films were major blockbuster hits.
Continue Reading Below
The decade of 1990s saw her appear as special guest for the television series, ‘Melrose Palace’, ‘Touched by an Angel’ and ‘Spin City’. She was a contestant in the show ‘Dancing with the Stars’.
On Christmas 2012, she made her pantomime debut in the musical comedy, ‘Snow White and the Seven Dwarfs’. She starred opposite Warwick Davis. She reprised her role two years later at Opera House in Manchester. 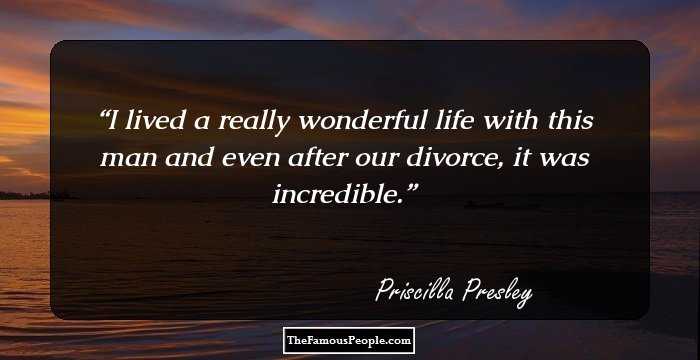 Quotes: Life
Personal Life & Legacy
Presley’s Casanova image did little to bring down her love for him. In December 1966, he proposed marriage to her and on May 1, 1967 the two entered into a wedlock. Exactly nine months later, they were blessed with their only child, Lisa Marie.
Life following marriage and child was happy for Priscilla despite Presley’s sporadic love affairs. However, following Presley’s career rise, the marriage soured as Presley spent more time touring and indulged in numerous love affairs.
The lack of interest shown by Presley in the marriage led Priscilla to get into love relationship with her karate instructor, Mike Stone. Though Presley was still her first love, she couldn’t stop herself from being close to Stone.
The marriage hit the rocks on February 23, 1972 when Priscilla and Presley separated. They filed for a divorce which eventually got finalized on October 9, 1973. Priscilla was granted $725,000 in addition to spousal support, child support, 5% of Presley’s new publishing house and half money generated from the sale of their Beverly Hills property.
Following her divorce in 1973, Priscilla had too many romantic associations. Immediately after her split, she started to live-in with her romantic partner, Mike Stone. But the relationship did not last long as she soon was infatuated by Mike Edwards, a model and actor. Her live-in relationship with Edwards lasted for six years.

Quotes By Priscilla Presley | Quote Of The Day | Top 100 Quotes

See the events in life of Priscilla Presley in Chronological Order